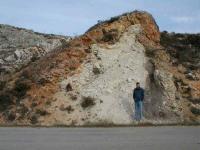 This peculiar fold is exposed in a region of an extended megabreccia near the village of Barrachina in the Rubielos de la Cérida impact structure. The fold is portrayed by a competent, however heavily brecciated Lower Tertiary limestone layer. The core of the fold is a pulp of nearly pulverized carbonate rock without any regular internal structure. Only a few limestone fragments are preserved.

Interpretation: The exposure is assumed to be located at or near the crater floor of the Rubielos de la Cérida impact structure (for more details see:

where giant rock masses moved in the excavation and modification stage of impact cratering to form the now exposed megabreccia. The fold is interpreted to be the result of a high-pressure injection of extremely brecciated material from below. A tectonic origin of this peculiar structure is hardly to understand. Local geologists (from the Zaragoza university and the Center of Astrobiology, Madrid) suggest collapse by dissolution of gypsum to have produced the megabrecciation – need we comment?