New article about one of the most important impact ejecta deposits in the world: 75 pages, more than 90 illustrations – most current version. Spanish with English abstract.

Abstract. – The Pelarda Formation (Fm.), located in the Iberian System in northeast Spain is a sedimentary deposit with an extension of roughly 12 km x 2.5 km and an estimated thickness of no more than 400 m. The formation was first recognized as a peculiar unit in the early seventies and underwent interpretations like a fluvial or an alluvial fan deposit having a postulated age between Paleogene and Quaternary. Since the early nineties the Pelarda Formation has been considered an impact ejecta deposit originating from the large c. 40 km-diameter Azuara impact structure and meanwhile being among the largest and most prominent terrestrial impact ejecta occurrences, which however is questioned by regional geologists still defending the fluvial and alluvial fan models. Roughly speaking, the Pelarda Fm. is a grossly unsorted, matrix-supported diamictite with grain sizes between silt fraction and meter-sized clasts. Strong clast deformations and abundant shock metamorphic effects like planar deformation features (PDF) are observed throughout the Pelarda F. deposit compatible with its impact ejecta origin. Aligned bigger clasts and smaller intercalated bands of sandstones, siltstones and clayey material indicate some local stratification obviously adjusted to flow processes within the impact ejecta curtain. This suggests that gravitational flows predominated in a transport by water in both liquid and gas states. Transport and deposition as a kind of 2 pyroclastic surge are discussed. A sketch sequence describes the emplacement process of the Pelarda Fm. as part of the Azuara crater formation and the integration in the general frame of pre-impact geology and some post-impact layering. 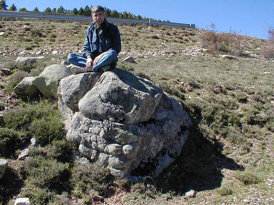 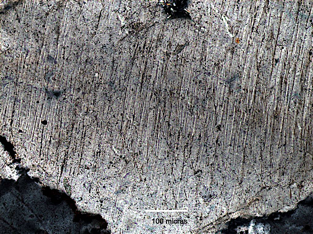