This article should now be replaced by the very comprehensive article on the Pelarda Fm. ejecta. Please click here!

The Pelarda Fm. covers an area of approximately 12 x 2.5 km² (Fig. 1), has in many cases a thickness of more than 200 m and, between 1,100 and 1,450 m altitude, forms the top of a mountain chain which belongs to the highest ones in the region (Fig. 2) (Carls & Monninger, 1974). The Pelarda Fm. unconformably overlies Muschelkalk and Paleozoic of the Olalla block (Figs. 2, 3) and  Fonfría Lower Tertiary (Paleogene) which is composed of alternately conglomerates and multicolored marls, and is overlain by the Olalla Tertiary materials (Adrover et al., 1982). 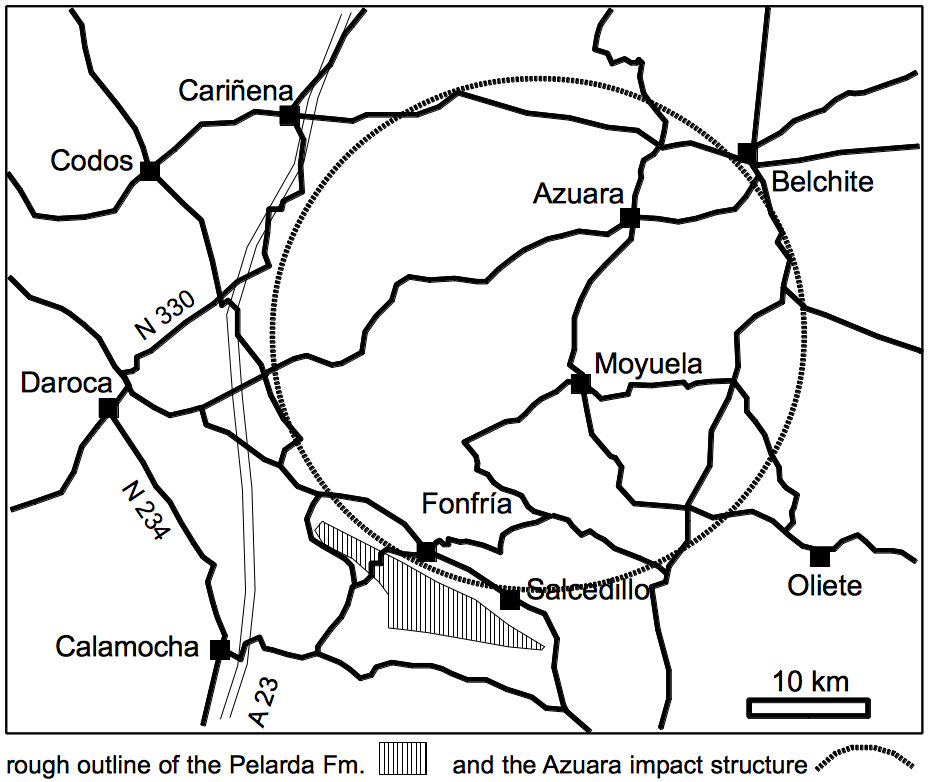 Fig. 1. Location map for the main deposit of the Pelarda formation in the rim zone of the Azuara impact structure. 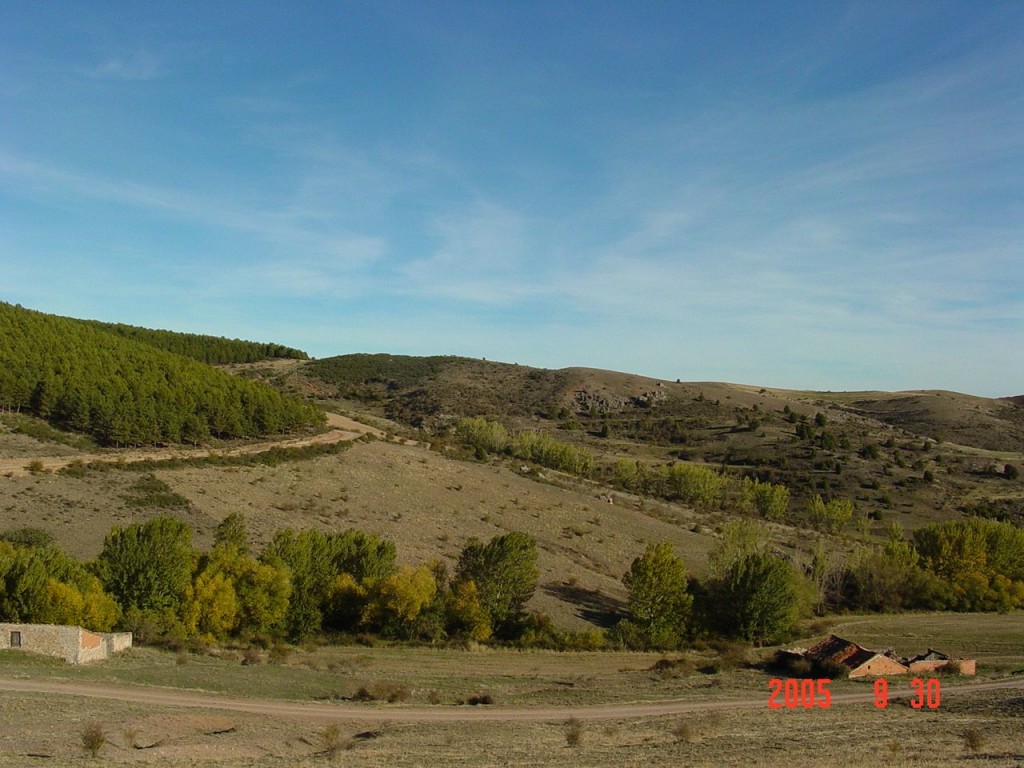 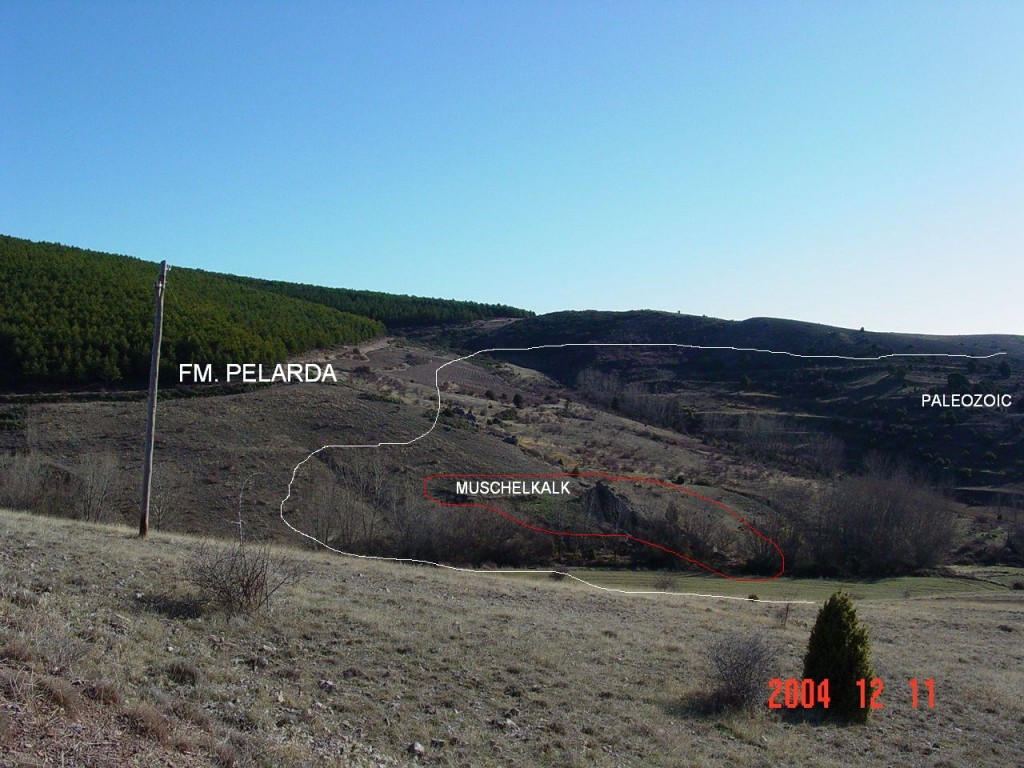 Fig. 3. The Pelarda formation ejecta overlying Muschelkalk and Paleozoic of the Olalla block. The contact between the Pelarda F. and the Paleozoic unit is rather diffuse, because the Quaternary debris from weathering of the Pelarda layers are moving downhill.

In the environments of Fonfría, the limestone cobbles of these conglomerates are heavily deformed and show intense striations, deep imprints and polish (Fig. 4). The striations display more or less homogeneous SW – NE strike, that is towards the center of the Azuara impact structure. It is suggested that the deformations formed in the Tertiary conglomerates when the Pelarda Fm. ejecta landed with high velocity and were emplaced under high pressure on top of them. 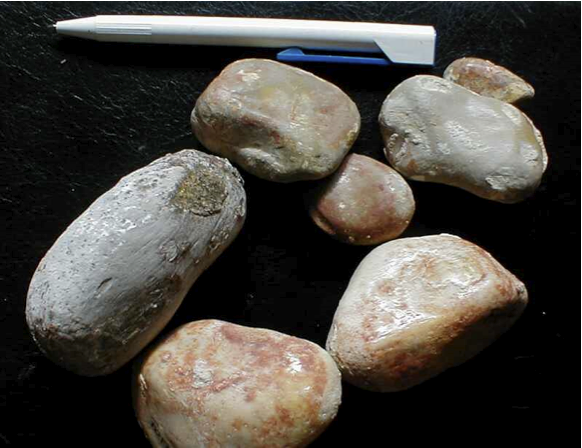 Fig. 4. Deformed cobbles from the Paleogene conglomerates exposed below the Pelarda Fm. The cobbles that were samples near Fonfría village exhibit distinct striations and mirror polish.

In general, the Pelarda Fm. shows a stratification divided into three parts: a lower, middle and upper zone. The contacts between the zones are gradual and not very distinct.

The lower zone contains clasts of Paleozoic pelitic rocks (slates and schists) und quartzites. The pelitic rocks are in general more abundant than the quartzites. The clasts are angular to subrounded, their average size is less than that of the clasts from the middle and upper zones, and they are embedded in an argillaceous matrix of maroonish to reddish color (Fig. 5). The sediments of this zone are clearly different from the Miocene alluvial fans in the neighboring Olalla area which concerns the characteristics of the components and the texture as well as the sedimentary structures. 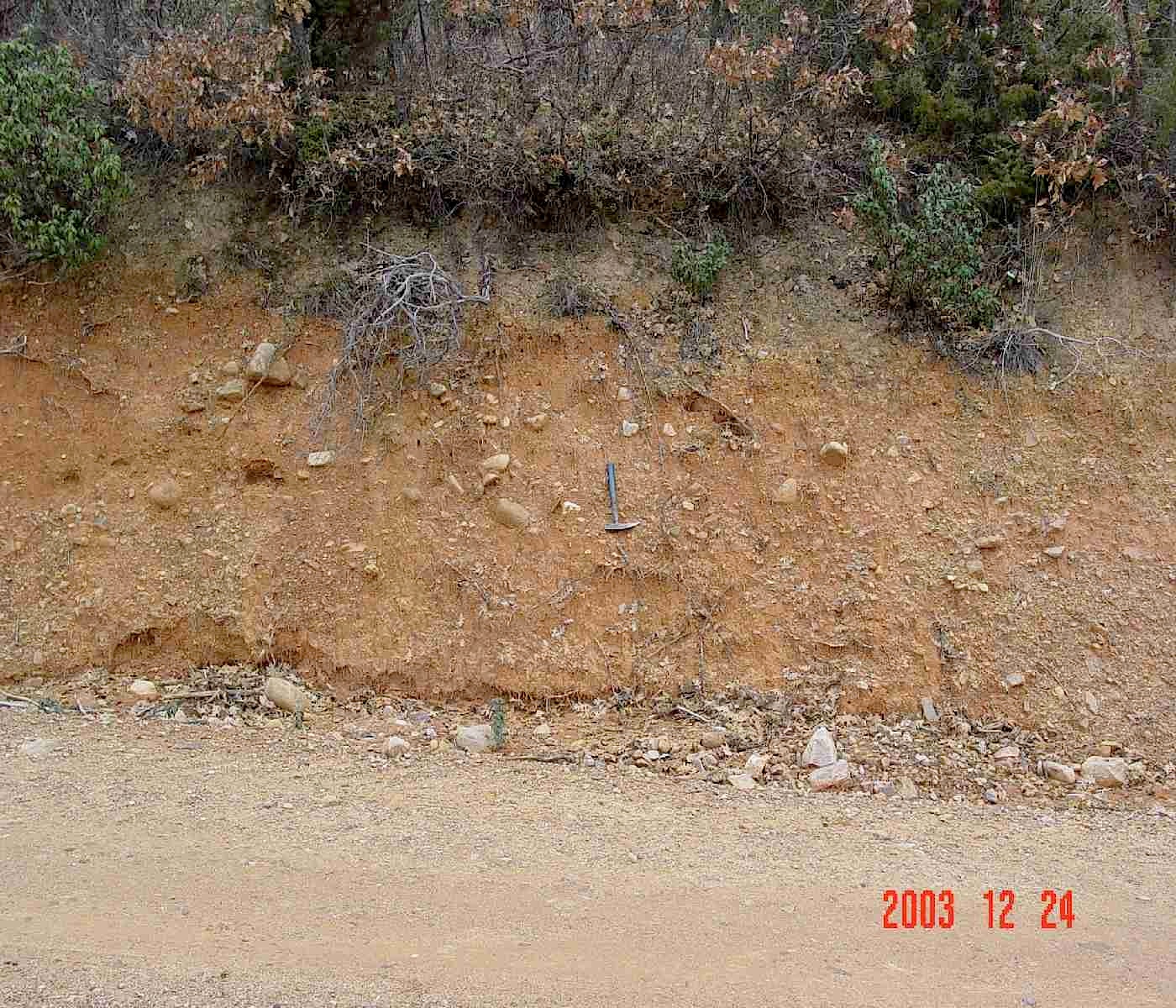 Fig. 5. Typical aspect of the lower unit of the Pelarda Fm. Near Salcedillo. The maroonish to reddish color of the matrix changes with respect to the in each case predominant contribution of Paleozoic and Buntsandstein material.

In the middle zone, the components are pelitic rocks, quartzites, few Buntsandstein clasts and sporadically (?Jurassic) limestone clasts. Compared with the lower zone, the ratio of quartzite to pelitic clasts is increased. Altogether, the clasts are more rounded and heterogeneously sized. In Figs. 6, 7 a Buntsandstein sandstone megaclast of about 9 m size is shown to be intercalated in the deposit. 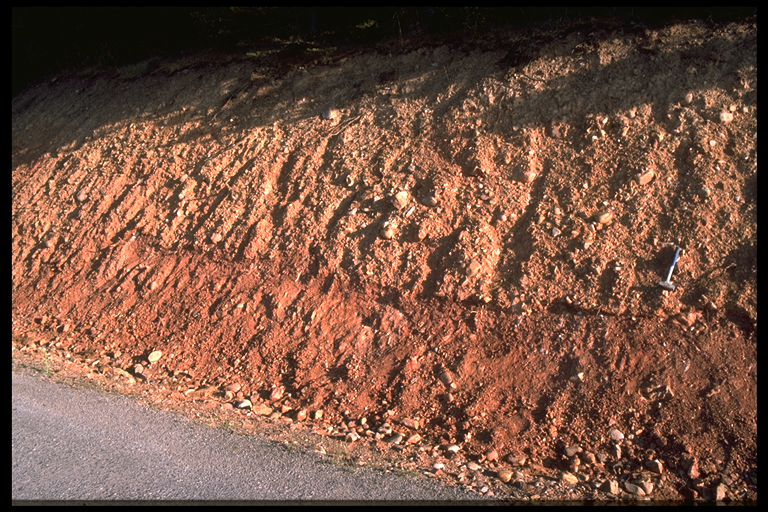 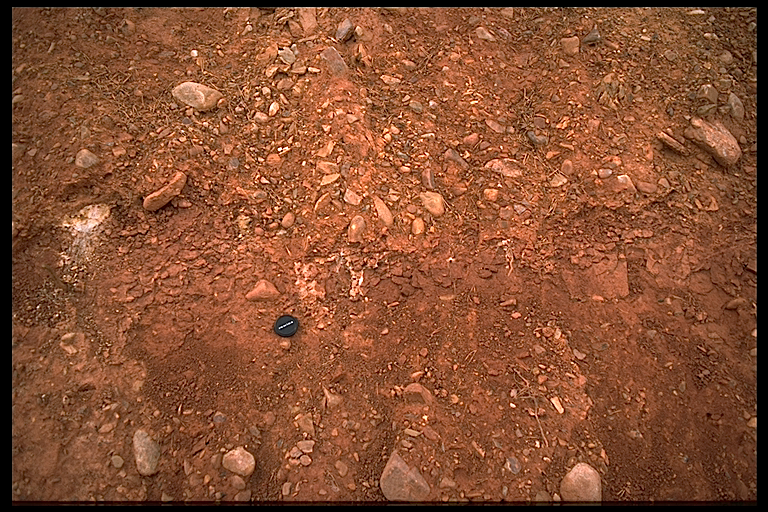 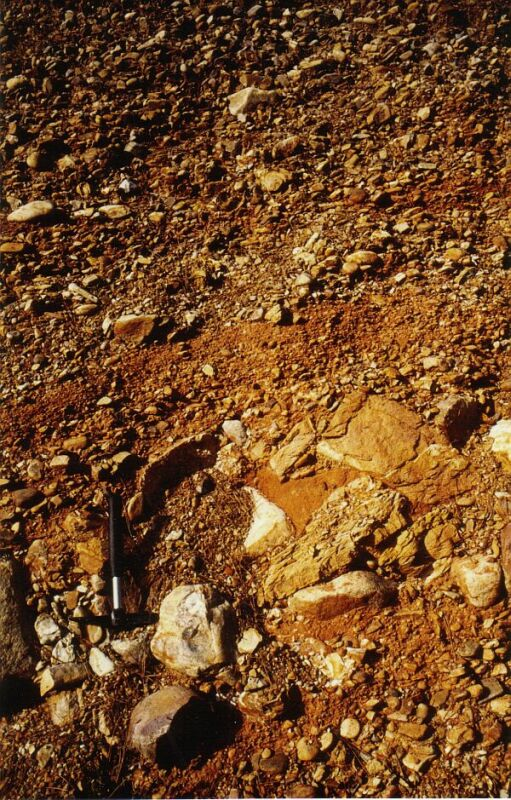 Fig. 8. Aspect of the middle unit of the Pelarda Fm. showing matrix-supported texture.

In all outcrops of this zone so far studied the texture can be termed diamictic and the clasts are matrix-supported (Fig 8). Predominantly, the matrix is sandy and in some parts argillaceous. Frequently, multicolored Tertiary marls and red Buntsandstein sandy materials are intermixed in the matrix, and especially the red Buntsandstein sands give a typical color to the deposits when exposed (Fig. 5, Fig. 8).

The upper zone also shows a matrix-supported texture, and the matrix is basically muddy. The components are predominantly unsorted rounded to subrounded quartzite clasts and subordinately pelitic rocks. In general, the quartzite clasts are much larger than the slate, schist and Buntsandstein clasts. Occasionally, the size of quartzite boulders may exceed 2 m (Fig. 9). 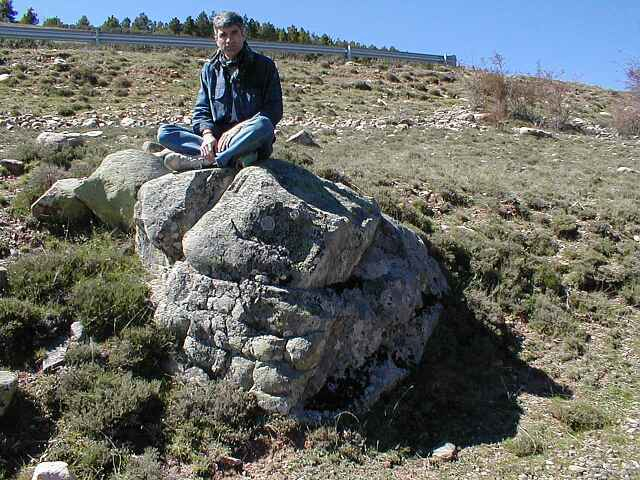 Fig. 9. Quartzite megaclast in the upper zone of the Pelarda Fm. It is hardly to imagine how such a big block could have been transported to the uppermost part of the mountains as part of a fluvial block conglomerate as has been postulated by Carls & Monninger (1974).

In all three zones referred to, a stratification is completely lacking except for few conglomeratic and sandy intercalations (Figs. 10,11) that are sometimes laminated but do not display tabular bodies (neither small nor large) nor do they form channeling structures. In these intercalations, the majority of larger clasts are oriented parallel to the lamination with their more convex part upwards (Fig. 12). These clasts enabled the measurement of dip which is either SW or NE. This dip corresponds with the strike of striations of cobbles (see below) and is interpreted to reflect the direction of transport of the ejecta out of the Azuara structure. 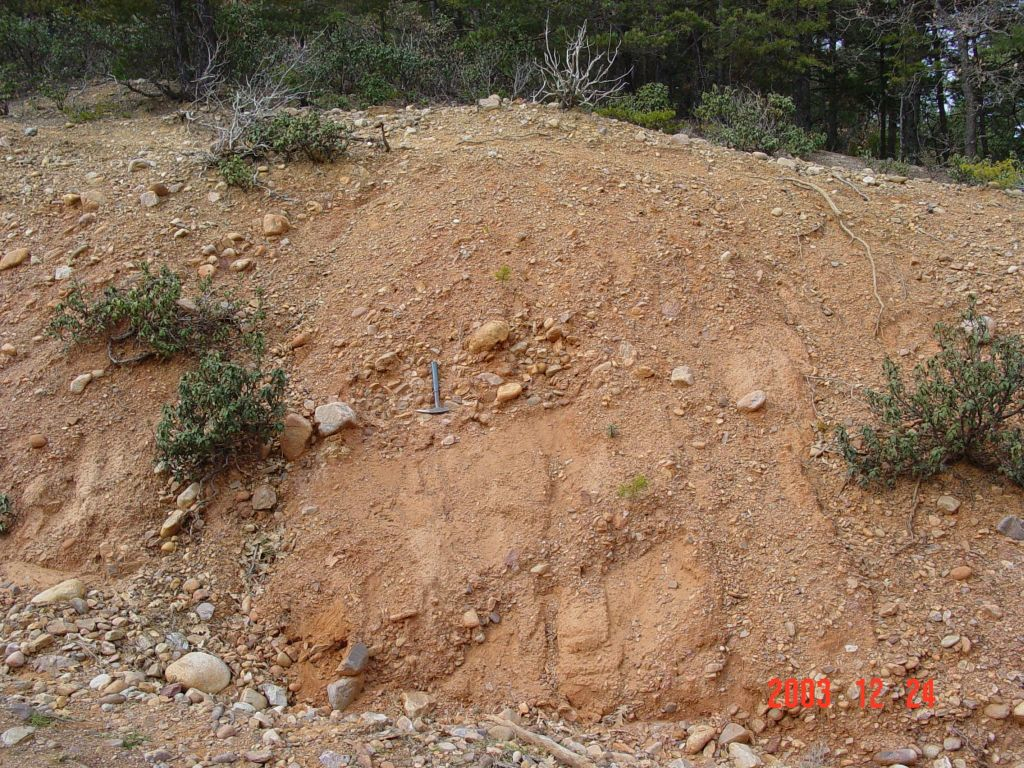 Fig. 10. Sandy blocky intercalations in the Pelarda Fm. ejecta lacking any stratification, however. 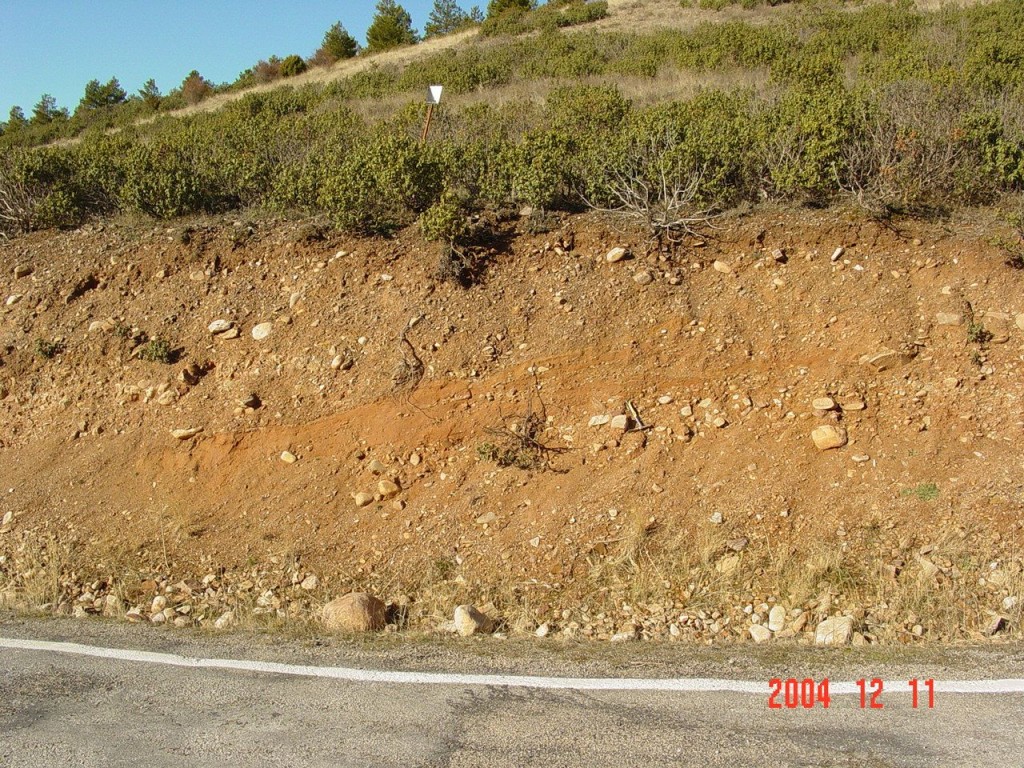 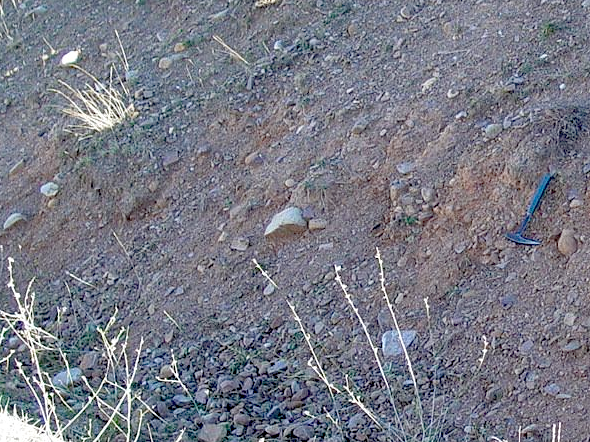 Fig. 12. Larger clasts show an adjustment to a suspected flow texture of the matrix. In general the convex side of the boulders points upwards. This orientation enabled the measurement of dip that resulted in a preferred SW – NE direction.

As already mentioned, there is no clear contact between the three zones, and no structures can be observed indicating different periods of deposition (e.g., thin sandstone beds (Figs. 10, 11) from instantaneous breaks, zones of reworked material, and so on). Likewise, a clear grain size distribution cannot be observed, and, always, the texture is matrix-supported. The occurrence of Buntsandstein megablocks and limestone clasts suggests that the deposit had erosive capabilities. On the other hand, the orientation of the clasts in the middle zone, the distinct bad sorting and the general texture of the Pelarda Fm. deposit indicate conditions of a non-Newtonian flow.

Striations of cobbles and boulders

In all three zones of the Pelarda Fm., slate, schist and quartzite cobbles and boulders are observed to display distinct striations. The surfaces show one or more sets and are in some cases irregularly striated (Figs. 13, 14, 15). The quartzite cobbles and boulders are more distinctly striated in the lowermost zone. For more than 400 sets, the azimuth of the striae strike has been measured to show a non-random distribution. A rose diagram displays a maximum in the SW – NE direction and a subordinate, more or less perpendicular accumulation (Fig. 16). The SW – NE strike points to the centers of the Azuara and Rubielos de la Cérida impact structures (Ernstson & Claudin, 1990). 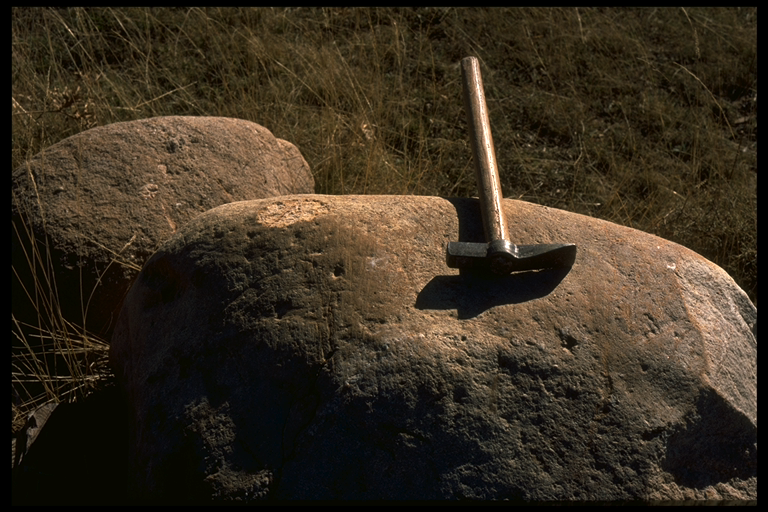 Fig. 13. Pelarda formation: large striated quartzite boulders. – Science may yield curiosities: When the impact ejecta origin for the Pelarda formation had been suggested and an article (Ernstson & Claudin 1990) was printed showing exactly this photo of the heavily striated quartzite boulders, these heavyweight objects resting near a drop-off had disappeared only shortly after and were never seen again.

Fig. 14. Multiple sets of striae on a quartzite cobble from the Pelarda formation ejecta. The field is 2.5 cm wide. 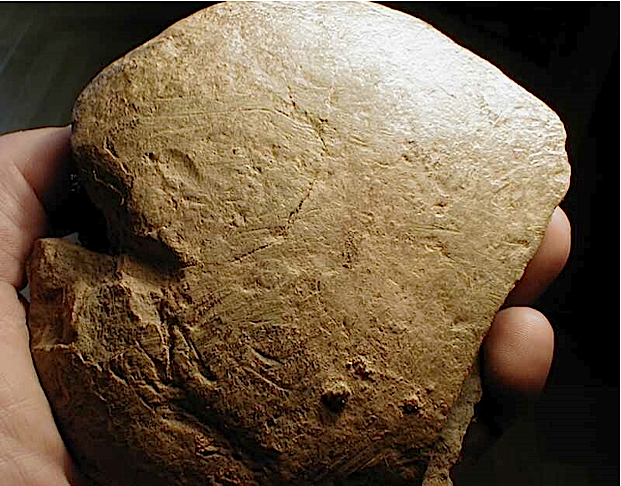 Fig. 15. Irregular striae and imprints on a schist cobble from the Pelarda formation ejecta. 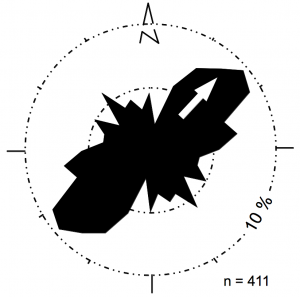 Fig. 16. Rose diagram for the strike orientation of striae sets on cobbles and boulders from the Pelarda formation ejecta. The prominent SW – NE direction points to the center of the Azuara impact structure.

Strong fracturing and characteristic deformations of cobbles and boulders

In addition to the striae, more features are observed to indicate intense plastic deformations of the cobbles and boulders. We mention sets of irregular, frequently open, fractures with complex bifurcations and rotated displacements (rotated fractures) (Fig. 11, 12, 13). Because of an immediate disintegration to happen, any transport of such deformed clasts can be excluded, which actually proves an in situ deformation. 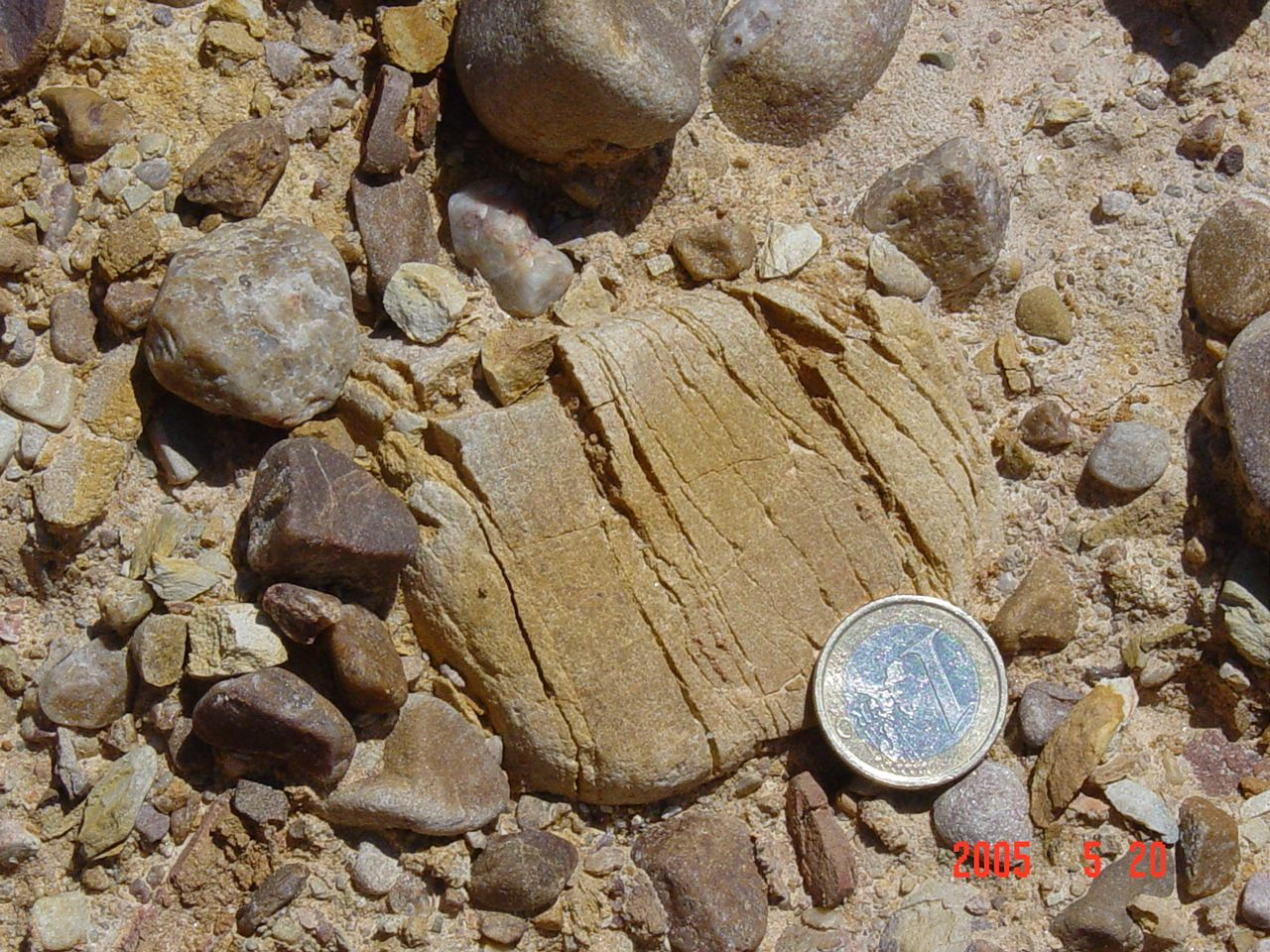 Fig. 17. Typical in situ fracturing of a quartzite cobble. A transport after the strong deformation can be excluded. This simple observation is hardly compatible with any hypotheses on conglomerate and alluvial fan deposition. Quaternary tectonics as proposed by some geologists/impact opponents as responsible of these deformations must be consigned to the realms of fantasy. 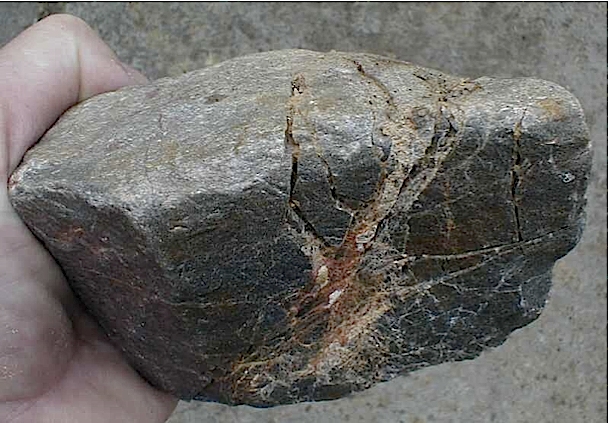 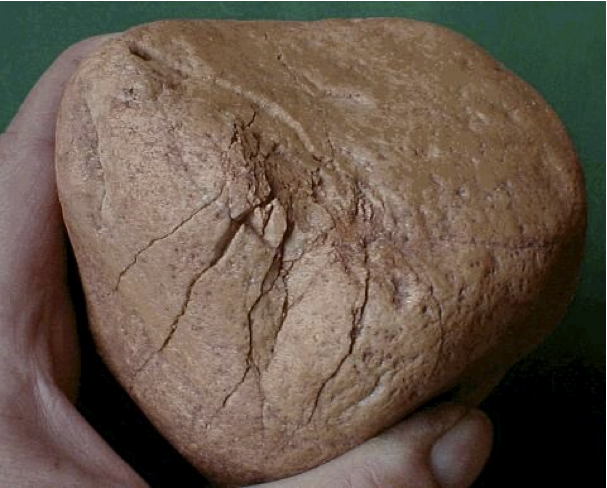 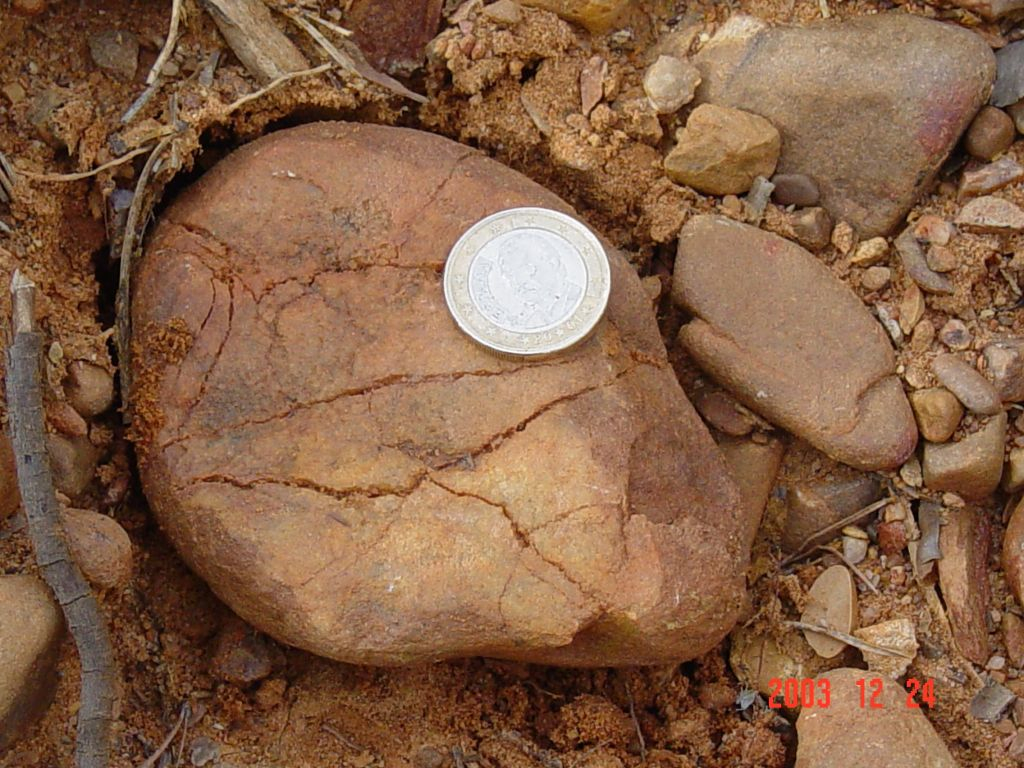 Abundantly, quartzite boulders show a typical fracturing that can be ascribed to shock spallation. Spallation is a well-known process in fracture mechanics as well as in impact cratering and has been investigated theoretically and experimentally by many researchers. Unfortunately, it is less well known that spallation can also be observed in nature as an actually existing geologic phenomenon in and around impact structures. Spallation takes place when a compressive shock pulse impinges on a free surface or boundary of material with reduced impedance (= the product of density and sound velocity) where it is reflected as a rarefaction pulse. The reflected tensile stresses lead to detachment of a spall or series of spalls.Prominent spallation effects have been reported for shocked Buntsandstein conglomerates exposed around the Azuara/Rubielos de la Cérida impact structures. Details about these geologic spallation features have been described in Ernstson, K., Rampino, M.R., and Hiltl, M. (2001): Cratered cobbles in Triassic Buntsandstein conglomerates in northeastern Spain: An indicator of shock deformation in the vicinity of large impacts. Geology, 29, 11-14., and can be found here. 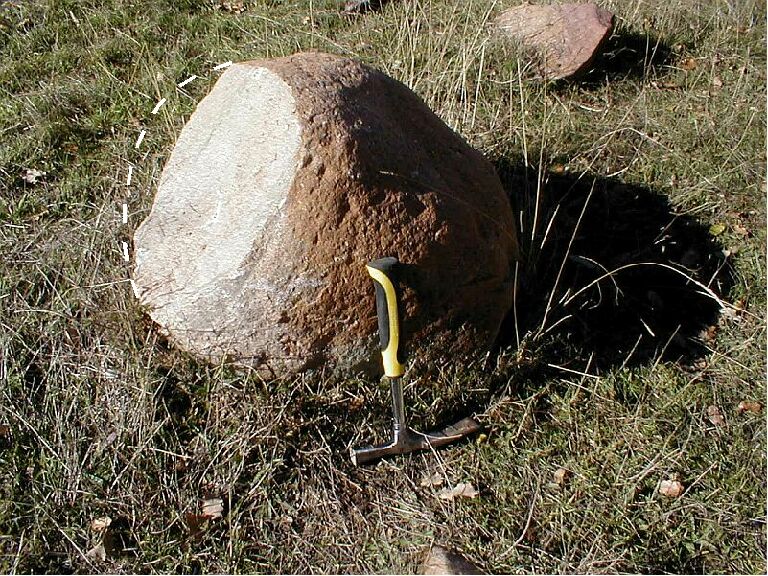 Fig. 22. Peculiar concave fracture of a quartzite boulder in the field of the Pelarda formation deposit is explained by dynamic shock spallation. Typically and for geometrical reasons, the concave fracture plane mirrors the original convex boulder surface (as shown dashed). 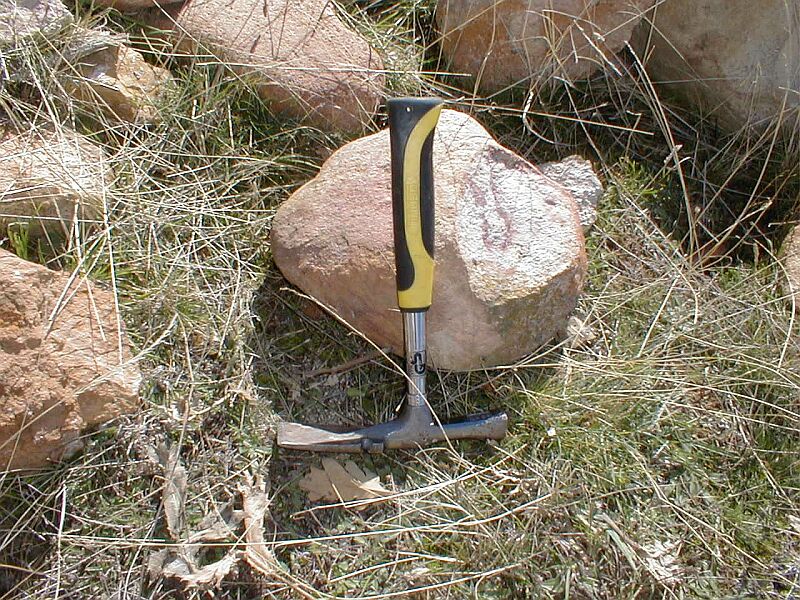 Fig. 23. Like in Fig. 22: A concave fracture plane mirrors the originally convex boulder surface – a typical shock spallation effect abundantly observed in the field of the Pelarda formation ejecta. 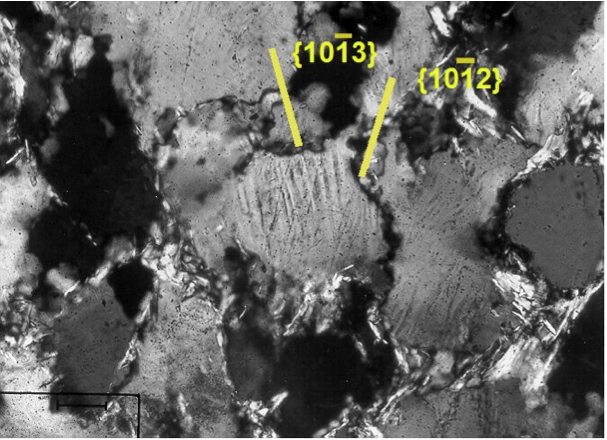 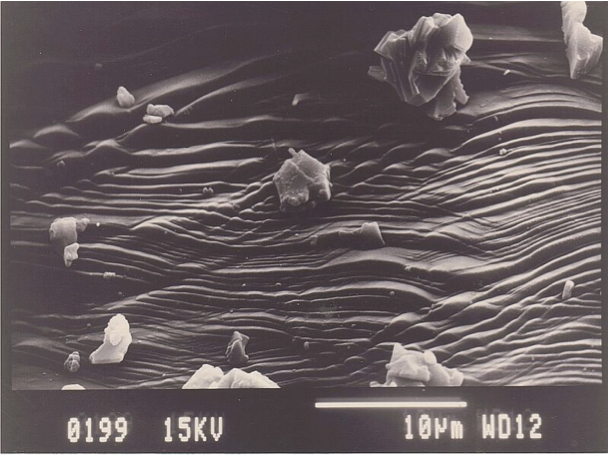 Fig. 25. SEM image of two sets of crossing PDFs in quartz from the Pelarda Fm. ejecta. Note the spacing of the individual PDFs, which is distinctly less than 1 µm in many cases.

From these data, and in view of the location of the deposit and the source rocks of the clasts (in some cases more than 50 km apart), Ernstson & Claudin (1990) conclude that the Pelarda Fm. constitutes the remnants of an ejecta deposit originally extended around the Azuara and Rubielos de la Cérida impact structures. The unusual thickness is explained by the interaction of the material more or less synchronously excavated from both structures. The material incorporated and the stratigraphic position of the layers underlying and overlying the deposit correspond with an Upper Eocene to Oligocene age of the Pelarda Fm.

More about shock effects in the Azuara impact structure and a very bad story in science can be read here.

In the course of mapping the environs of the Azuara and Rubielos de la Cérida impact structures we found more deposits exhibiting the very typical facies of the Pelarda formation, and from the general geologic setting and the geologic inventory we concluded they must represent also impact ejecta deposits. A characteristic example is given with the Ermita de San Roque deposit west of the Azuara Structure (Figs. 26, 27). 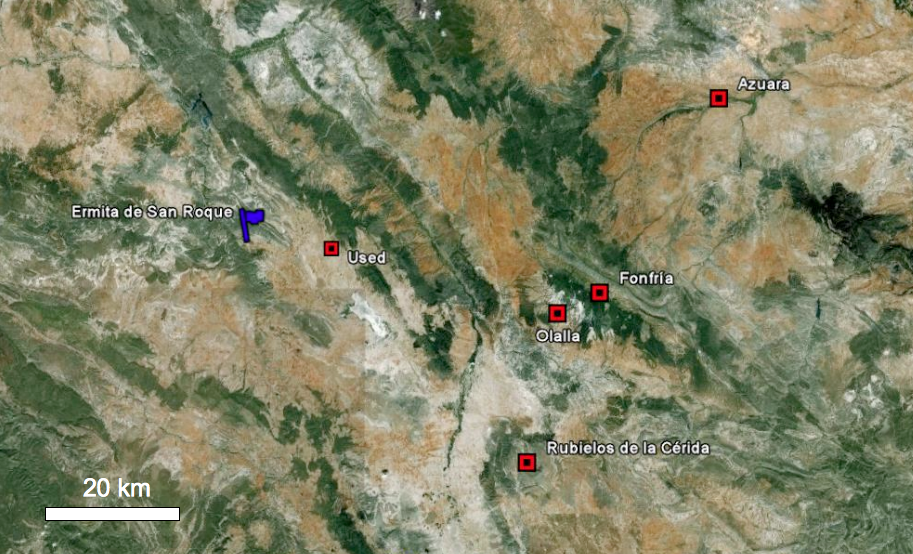 Fig. 26. Google Earth location map for the Pelarda formation deposit near the Aldehuela de Liestos village at the Ermita de San Roque. The main deposit of the Pelarda Fm. extends between Fonfría and Olalla. 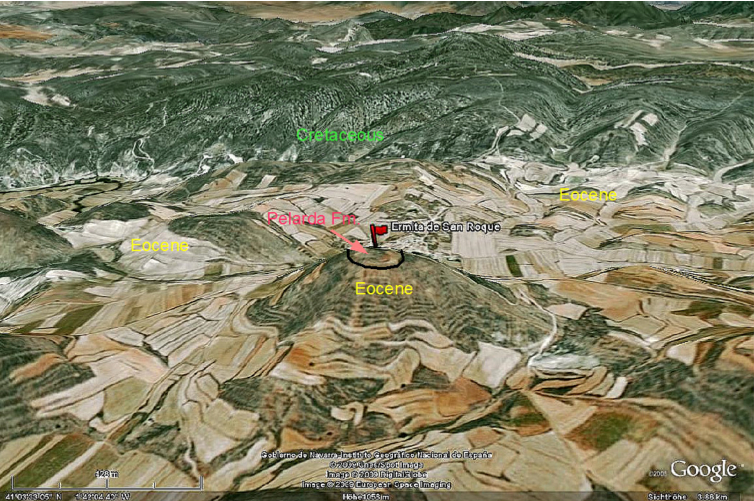 Fig. 27. The Pelarda formation deposit on top of the hill near Aldehuela de Liestos (Google Earth, oblique view). The deposit is found right in the middle of Mesozoic and Cenozoic sediments; Palezoic is not exposed within a radius of 10 km at least. On cursory inspection, no quartzite blocks of the size of the San Roque deposit have been observed in the plains around the hill.

A short report with quite a few photographs of the deposit and its rocks may be clicked here: San Roque report PDF.

Controversial debate on the origin of the Pelarda formation

With regard to the observations and material so far presented, the interpretation of the Pelarda Fm. as a “raña” type deposit or a fluvial conglomerate implies basic problems:

Turnbridge, I.P. (1981): Sandy high-energy flood sedimentation-some criteria for recognition, with an example from the Devonian of S.W. England. Sedim. Geology, 28: 79-95.