In the 1968, Vol. 58, issue of the International Journal of Earth Sciences (formerly Geologische Rundschau) a short article (in German) has been published about the evidence of a meteorite shower in the Atacama desert in Northern Chile near the Quillagua oasis having produced a roughly elliptically shaped strewn field of about 80, or possibly more, meteorite impact craters (Thomas N. 1968).

The group of craters was discovered in 1956 during a geological field campaign and later specified by photogeological interpretation and an additional visit to the field by Thomas N. The craters form three main groups to span an ellipse of 40 km x 15 km (Fig. 1). A so-called J. Kighley group not further addressed in the article would enlarge the ellipse to roughly 60 km x 15 km (Fig. 1). 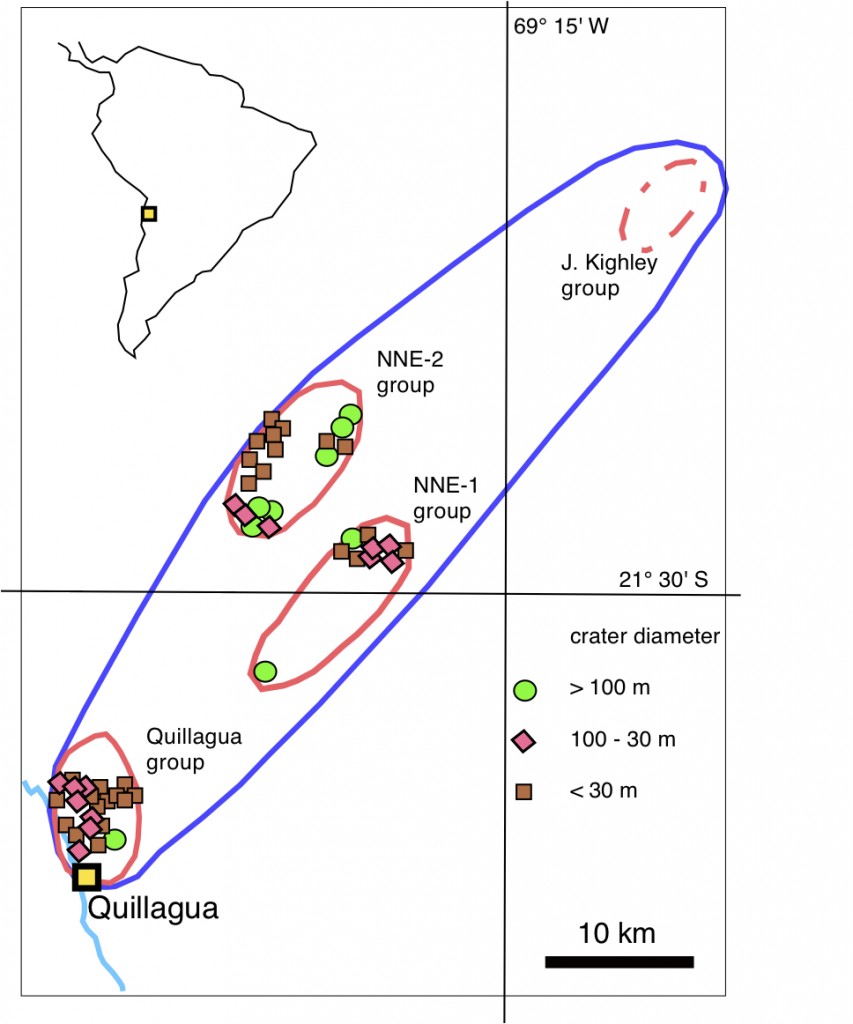 The number of mostly photogeologically defined craters amounts to 82, obviously not all shown in the map of Thomas N. (Fig. 1), and the distribution according to the diameters can be seen from that map. 11 craters have diameters exceeding 100 m, 18 craters are 30 – 100 m big, and the remaining 53 craters are smaller than 30 m. The biggest crater (the individual one in the southwest of the NNE-1 group) has a diameter of about 300 m. From the field inspection the number of smaller craters is said to be much larger than seen in the photo imagery.

Geologically the craters occur in Tertiary (Miocene, Pliocene) and Quaternary sediments. The Tertiary is represented by badly cemented conglomerates and sandstones, limnic limestones and salt pans. The Tertiary is covered by young eolian and piedmont sediments not unambiguously penetrated by the meteorite impacts, at the same time speaking against a kind of volcanic origin.

Thomas N. reports large quantities of silica glass from within and around the craters, which he interprets as typical “impactites”, and smaller amounts of a tektite-like glass. For Thomas N. the observations are indicative of a cluster of meteorites or a big meteorite that disintegrated at a high altitude. He does not consider an age for the proposed impact event.

In his “Catalog of 230 certain, probable, possible and doubtful impact structures” Classen (1977) has listed the Quillagua strewn field as “possible” impact. At that time, Classen handled the classification of impacts still rather restrictive. Established craters are only those with associated meteorites. Shock metamorphism is less indicative and ascribes the “probable” valuation only, while “possible” sites are those with other acceptable indications of meteorite impact.

Meanwhile, impact research has as is known advanced, and, hence, in the comprehensive “Expert Database on Earth Impact Structures (EDEIS)“ of the Web Encyclopedia on Natural Hazards the Quillagua strewn field has got the “probable” classification. This leads to the general question:

How is the situation today, some 50 years later?

In fact, one crater at Quillagua is reported and well recognized by the inhabitants however without any results of a closer investigation and not listened in the Canadian impact database.  The Quillagua crater is shown on a few private photographs, mostly via youtube in the internet where also a video (http://astronomy.activeboard.com/t46347504/quillagua-impact-craters/) can be clicked. In the accompanying text there is talk of at least seven impact craters in Quillagua. A sequence of 26, so far most informative color slides may be clicked HERE. In 2008, a meteorite hunter mentioned three impacts at Quillagua obviously without any meteorites left on the ground. “Almost all of the rocks in the area were burnt from the impact” – he reports. And we can read that wind energy industry is looking for investors for “Quillagua, Meteorites territory”. A very short and vague touristic hint to an archeological site “La Capilla, Quillagua Craters” and their being possible traces of a meteorite impact are also found in the web.

On the part of the science and of the so-called “impact community” the Quillagua impact obviously does not exist, and the rest of the many craters in the large strewn field appears to have more or less been forgotten, although we can read in the newspaper that “Palape, who owns the Town’s main restaurant, still dreams of attracting tourists to the 108 meteor crater sites in and around Quillagua.”

Clearly, the photogeologic images Thomas N. had at hands are not available, but we can try to use the Google Earth satellite imagery for tracking the craters in the large strewn field. 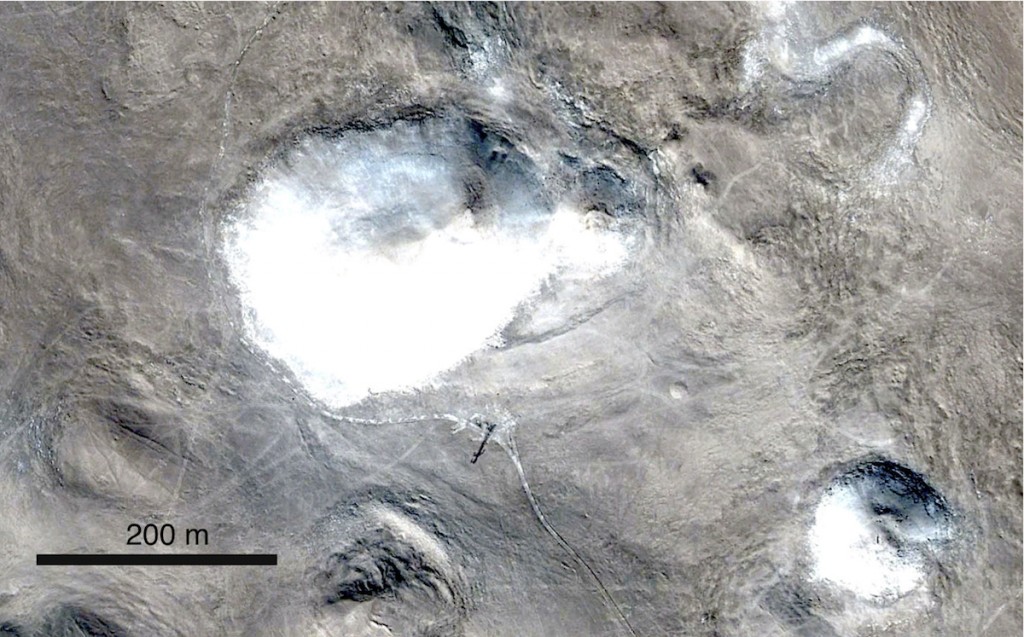 Fig. 2. Craters from the Quillagua group. The main crater is shown in the photos in the web. Obviously there are at least three synchronous impacts more or less superimposed as sketched in Fig. 3. This can also be seen in a few of the land-based photos. Google Earth. 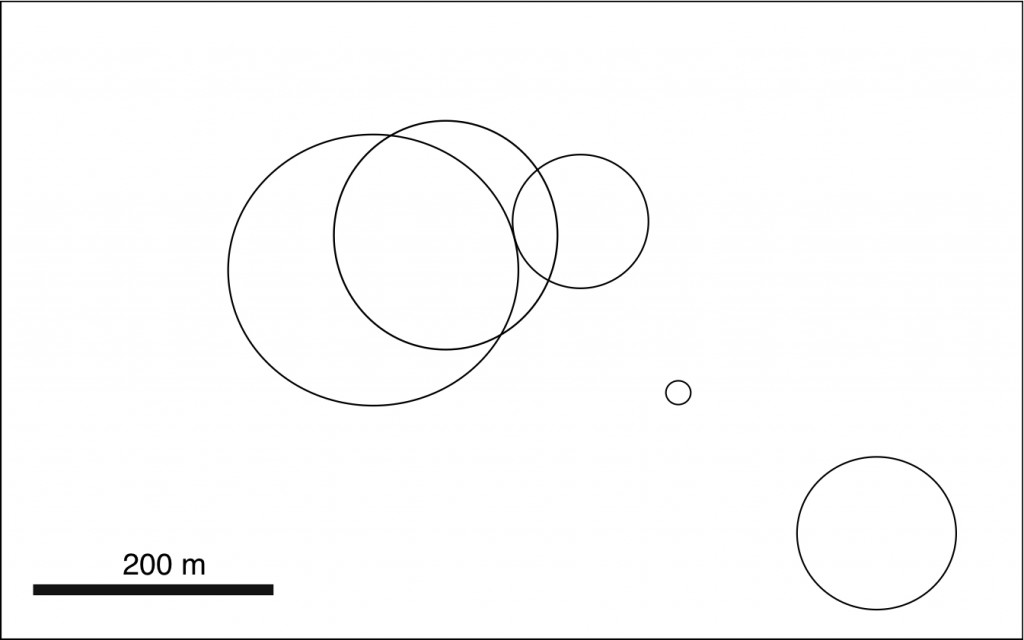 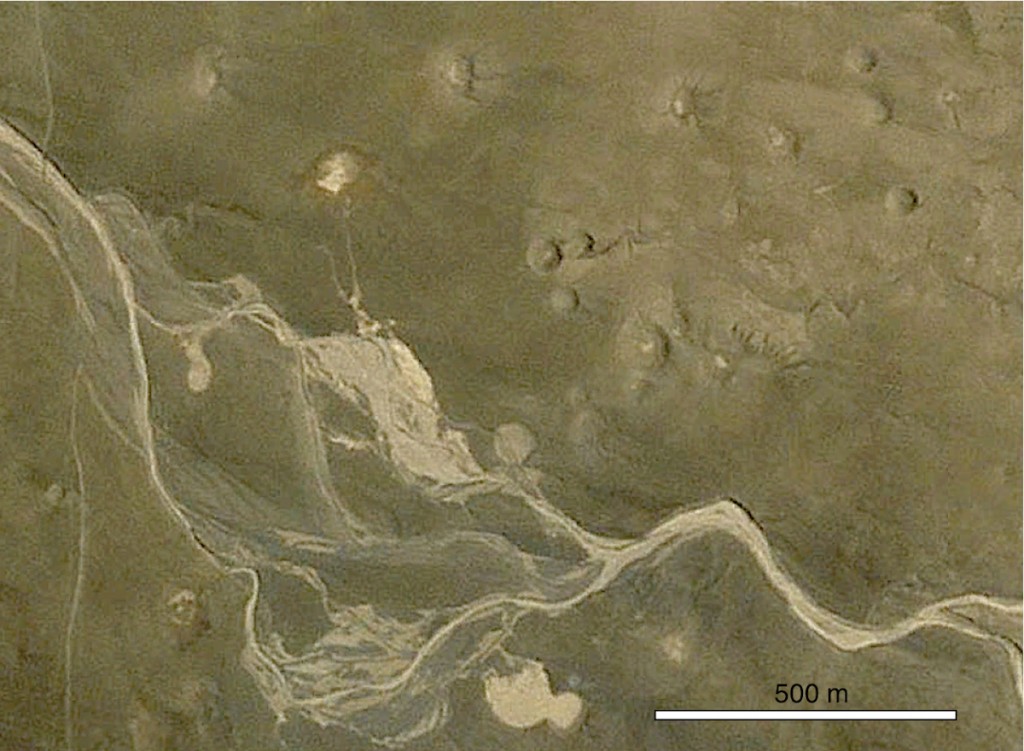 Fig. 4. Craters from the NNE-1 group. Note the radially diverging features seen with a few craters which could be impact-induced fractures in the ground. 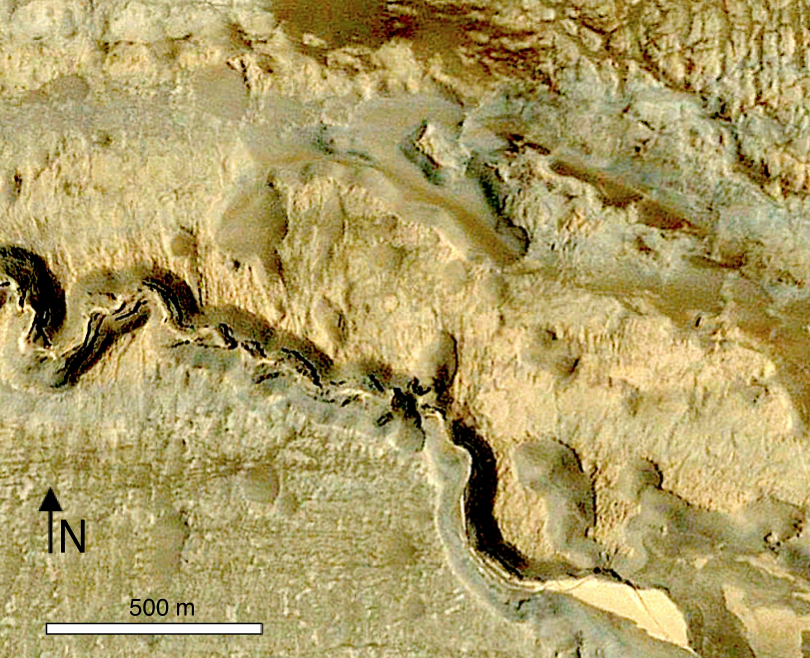 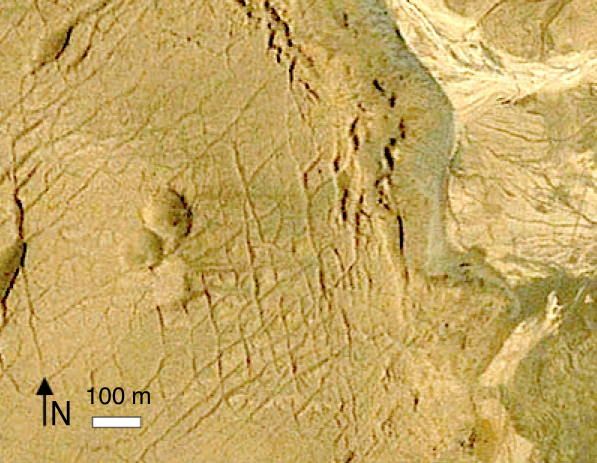 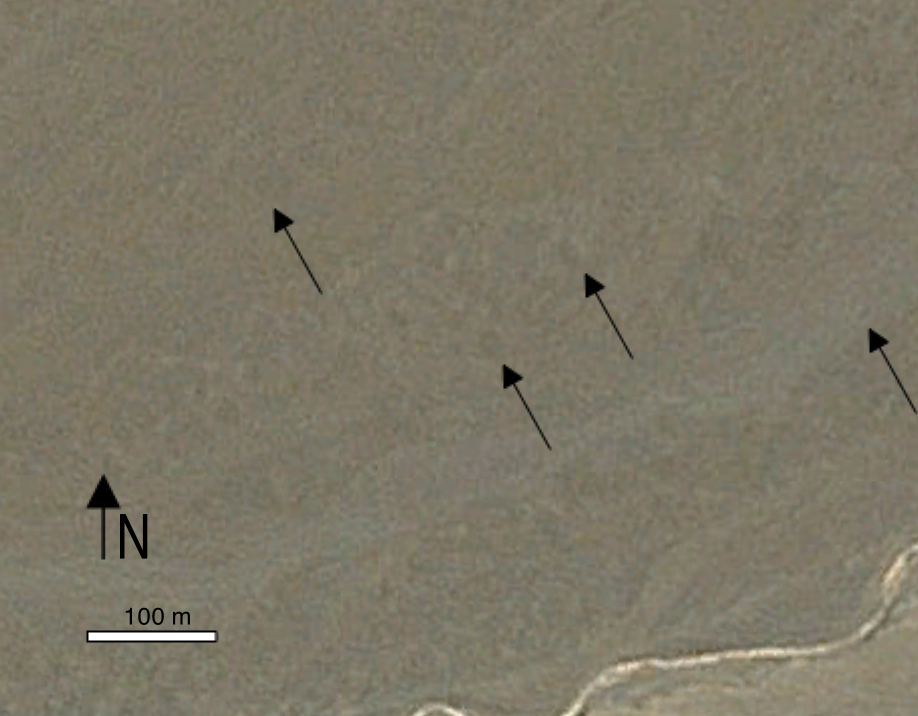 Fig. 7. Possibly craters from the J. Kighley group. The structures are only vaguely to be identified. Google Earth.