by Kord Ernstson & Ferran Claudin (July 2013)
Abstract. – The “round rocks” of the Weaubleau-Osceola impact structure have phenomenological counterparts in the Spanish Azuara/Rubielos de la Cérida impact structures where they occur within voluminous heavily brecciated rock units. Related nodular bodies within large monomictic movement breccias are observed also in the Ries impact structure. A process similar to the formation of monomictic impact breccias with rounded clasts as part of a mortar texture is suggested. A relation to the Weaubleau-Osceola “round rocks” may exist but not necessarily.

The Weaubleau (or now Weaubleau-Osceola) circular feature in southwestern Missouri is a 19 km-diameter impact structure that formed in the Mid-Carboniferous about 330 million years ago (Evans et al. 2003).

A peculiar feature clearly restricted to and common throughout the Weaubleau structure are the “round rocks” called also “Missouri rock balls” or “Weaubleau eggs” (Figs. 1, 2). Originally considered to be of glacial origin they are in general attributed now to the impact event. The idea of a formation as mega-accrecionary lapilli has been discarded and a diagenetic formation from blasted siltstone clasts intermixed in the fallback breccia and subsequent silification is mostly discussed. Nonetheless, the process of formation is still poorly understood. Here, we present evidence of roughly similar nodules occurring in the Spanish large Azuara and Rubielos de la Cérida impact structures where different from the Weaubleau “round rocks” they can be observed how they developed in situ. 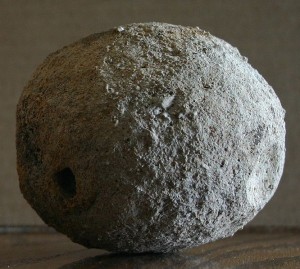 Fig. 1. Weaubleau “round rock”. The typical and most common size runs from golf-balls to grapefruit. Photo: Harmil, WIKIMEDIA COMMONS. 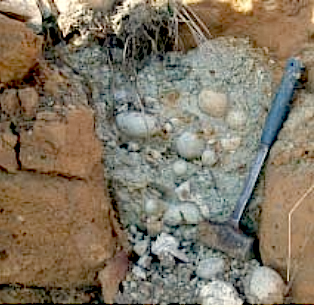 2 Observations: the in situ conglomeratization in the Spanish impact structures

A likewise peculiar nodule formation is known and has been described from the Spanish large Mid-Tertiary Azuara/Rubielos de la Cérida impact structures. As early as in 1973 W. Monninger in his excellent diploma thesis (University of Würzburg, Germany) described “tectonic nodules” (Fig. 3) intermixed in heavily shattered Cambrian slates (probably Valdemiedes Fm.). The nodules themselves gave evidence of also strong load and deformation, and their surfaces were frequently smoothed and polished. In 1973, when meteorite impact and impact geology were anything but familiar to geologists, Monninger concluded that the nodules could have formed in the contact zone during counter movements of tectonic blocks where they got their roundness and polish. Later the “tectonic nodules” fell into oblivion. 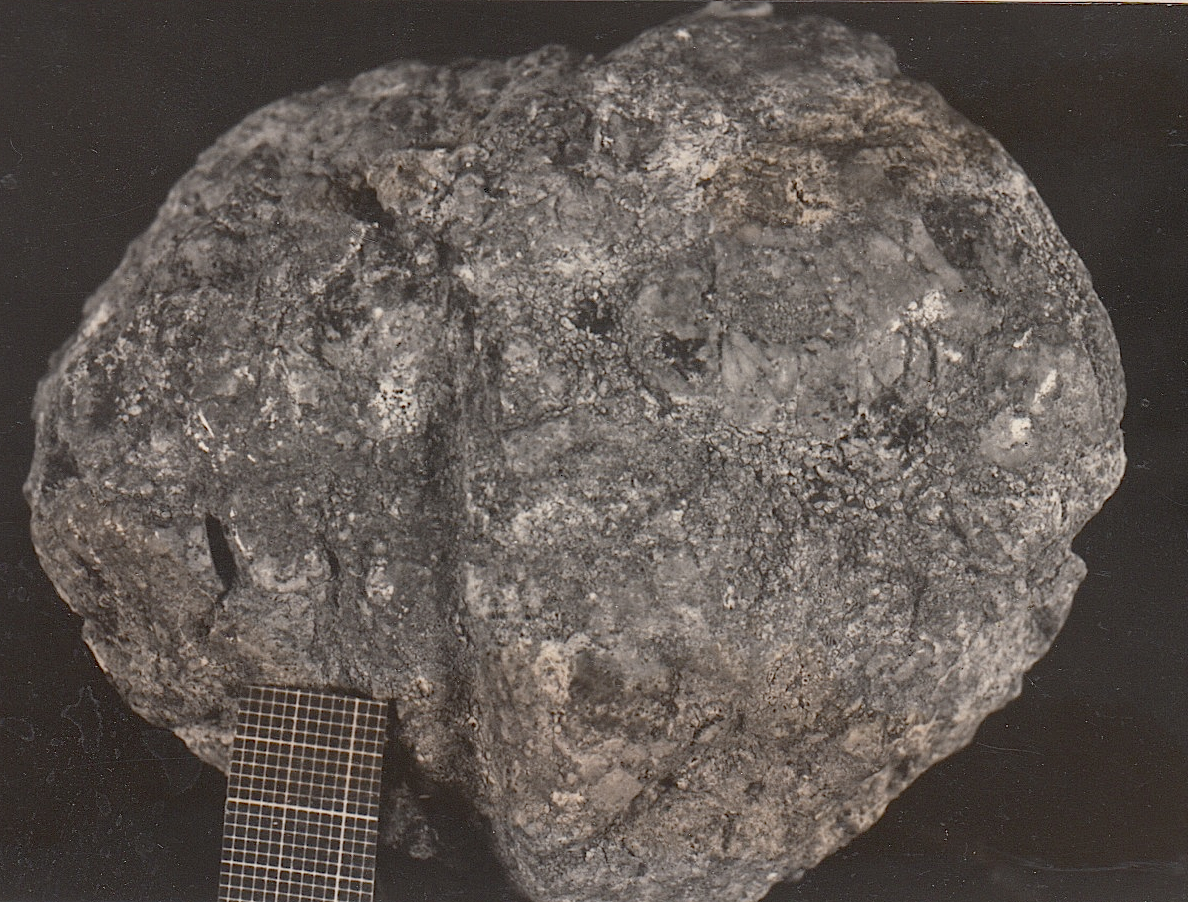 These nodules and their curious formation attracted attention again when Azuara and Rubielos de la Cérida became established impact structures. In the thirty years of their comprehensive investigation (Claudin et al. 2001, 2003; Ernstson & Claudin 1990, Ernstson & Fiebag 1992, Ernstson et al. 1985, 1987, 2001 a, b, 2002, 2003) we were frequently surprised to find outcrops reflecting what we have been calling “in situ conglomeratization“, a formation of spherical segregation within the autochthonous layering even in competent rocks (Figs. 4 – 10). And in this context we also rediscovered W. Monninger’s “tectonic balls” within the heavily shattered slates (Figs. 11, 12).

In the following we show and explain images of various outcrops where typical Spanish “round rocks” occur. 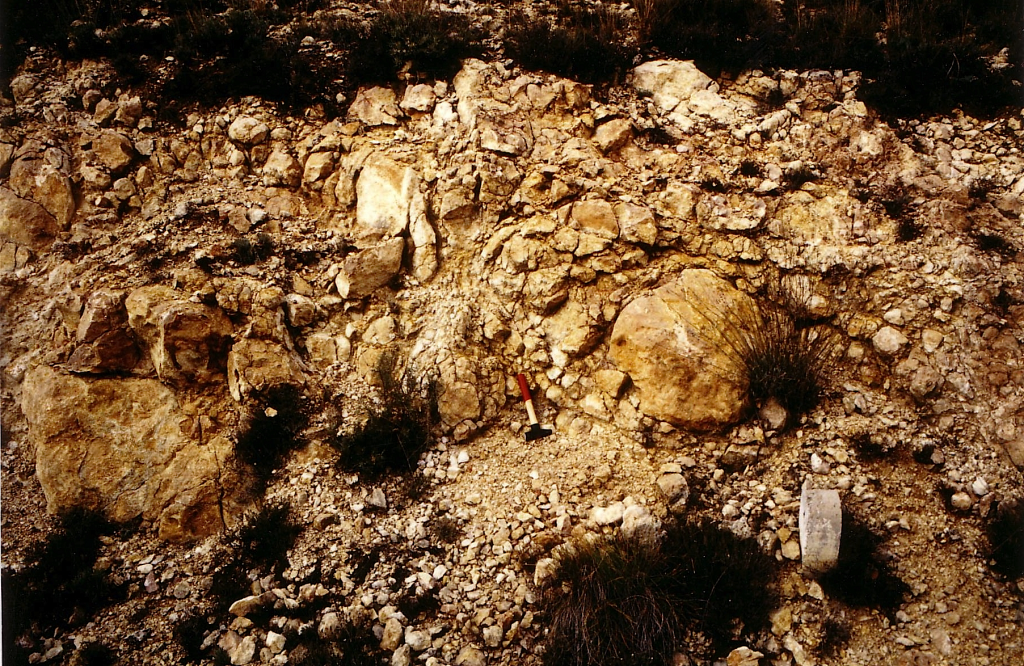 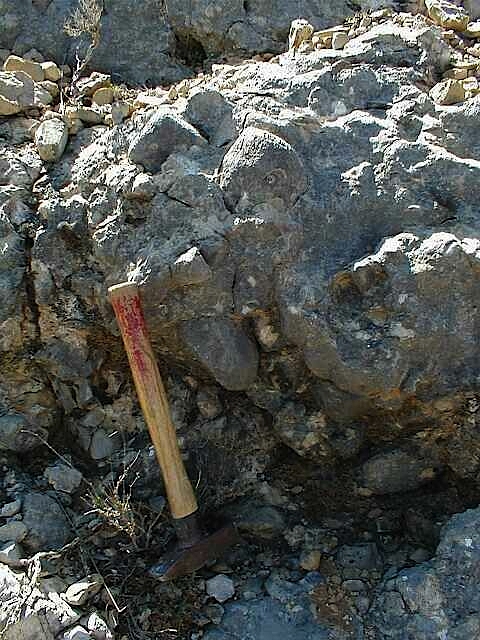 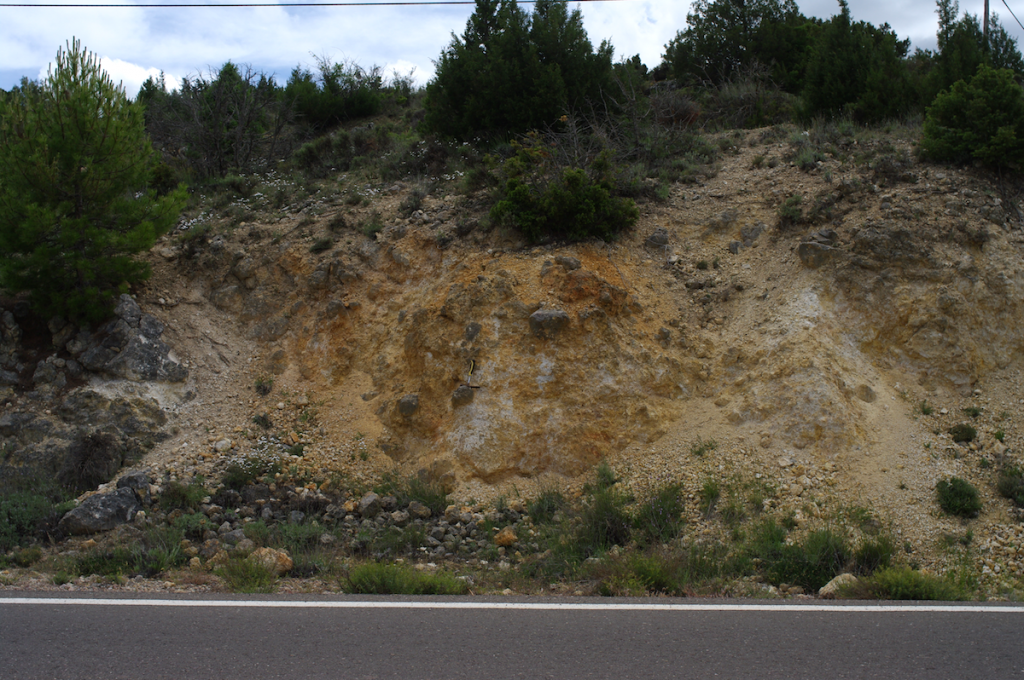 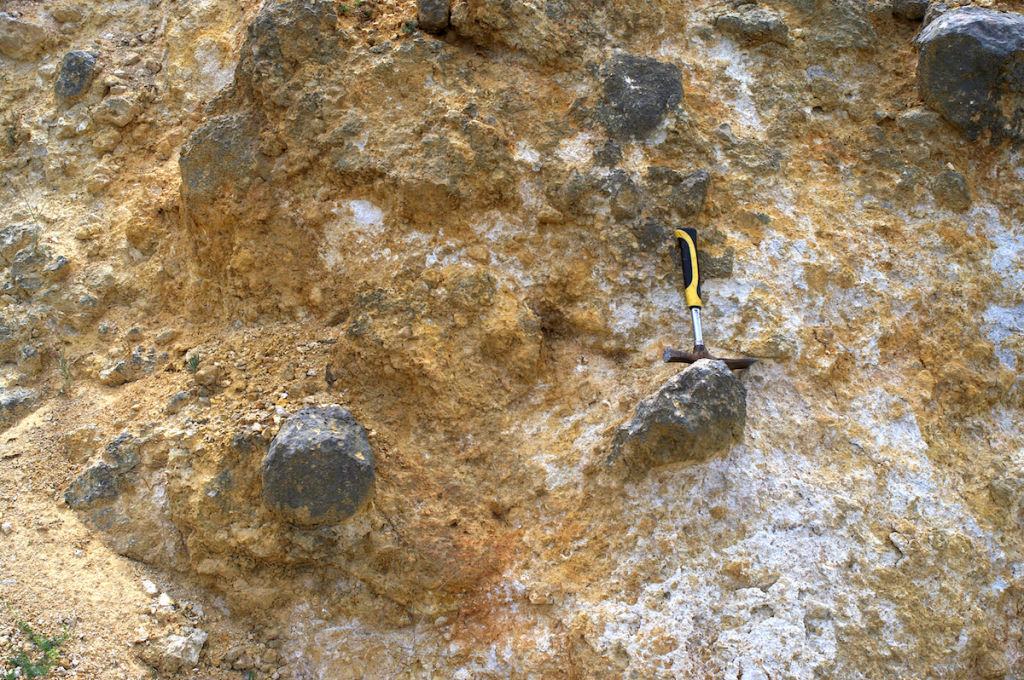 Fig. 7. Closer view of the outcrop in Fig. 6 with nodular bodies interspersing the grit breccia. 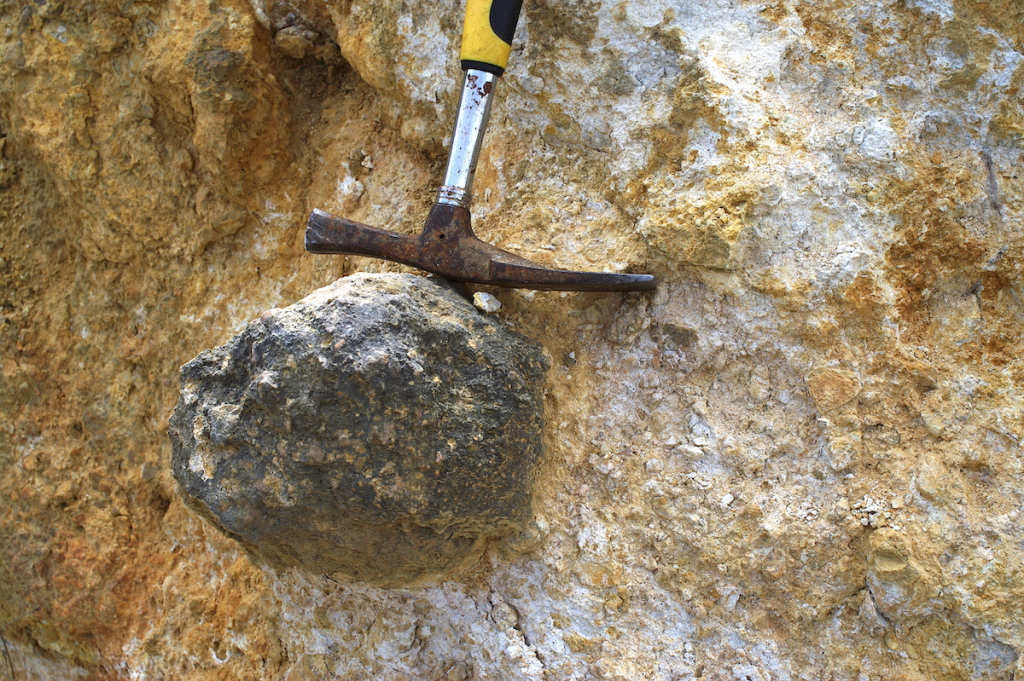 Fig. 8. Close-up of one of the nodular bodies. 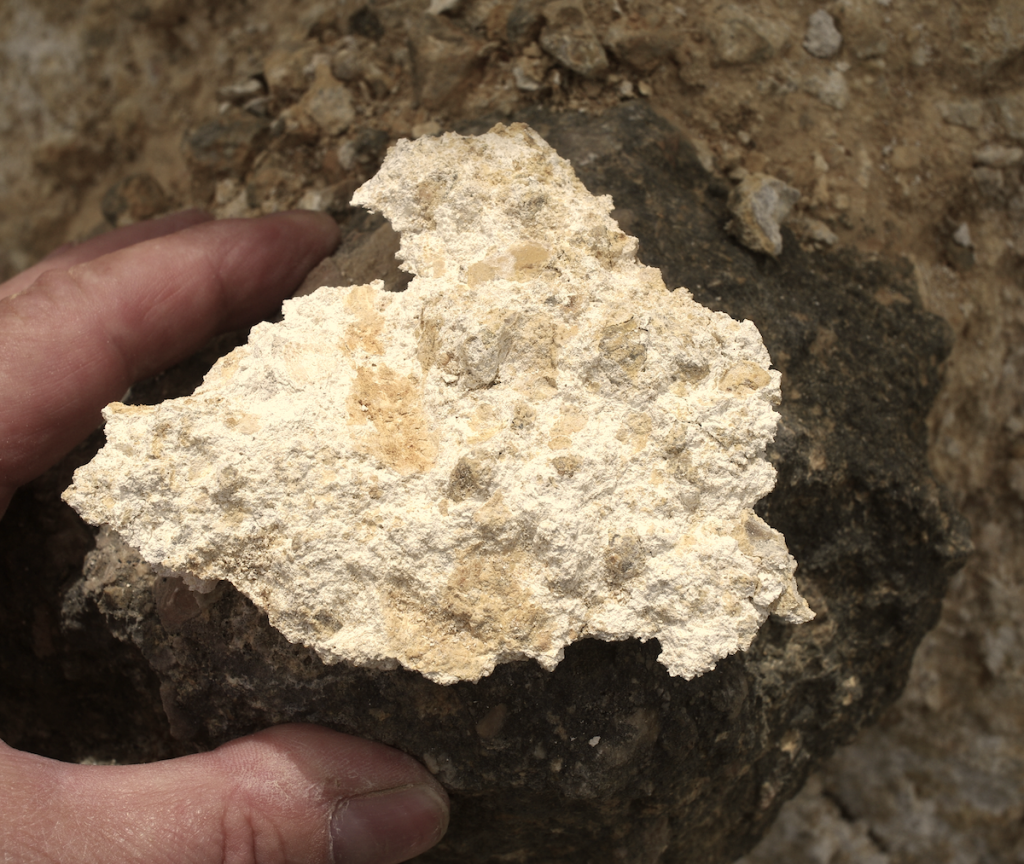 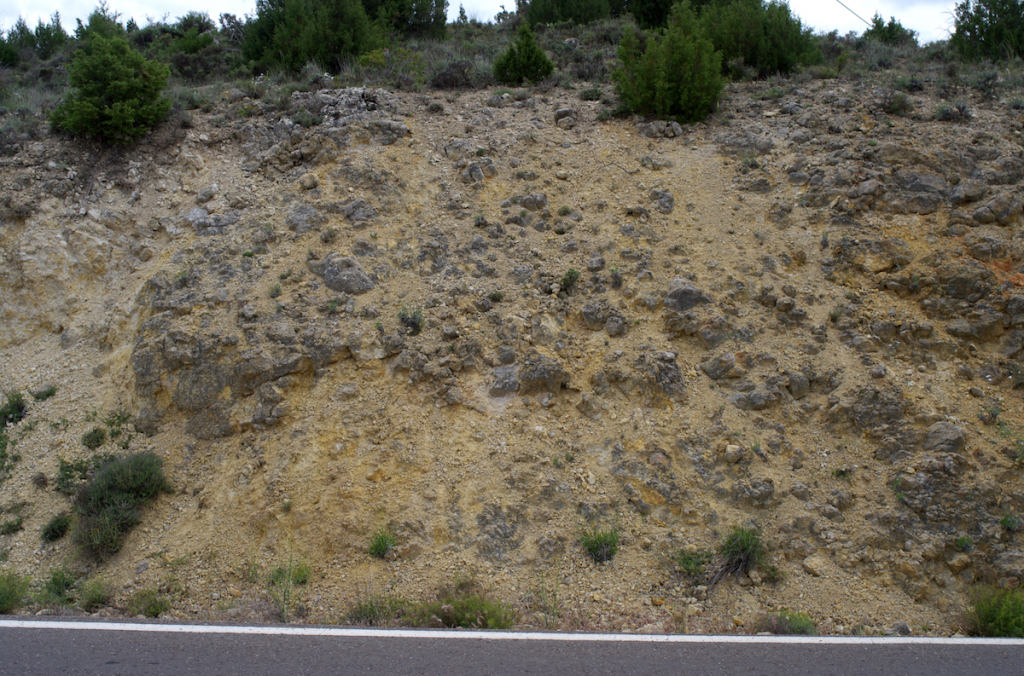 Fig. 10. Some 30 m apart from the outcrop in Fig. 6: Obviously an early phase of the in situ conglomeratization of the bedded Jurassic limestones that came to standstill before the final formation of the grit breccia with a few individual nodules remaining as seen in Fig. 7. 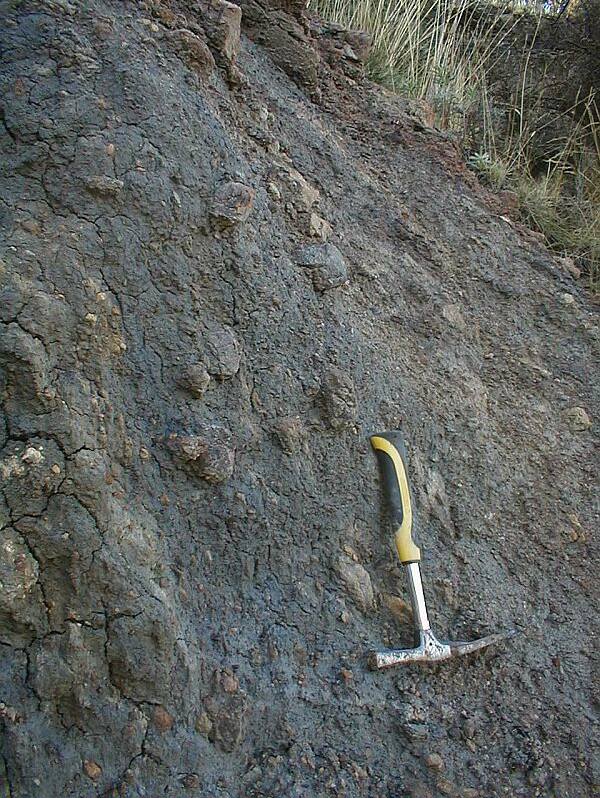 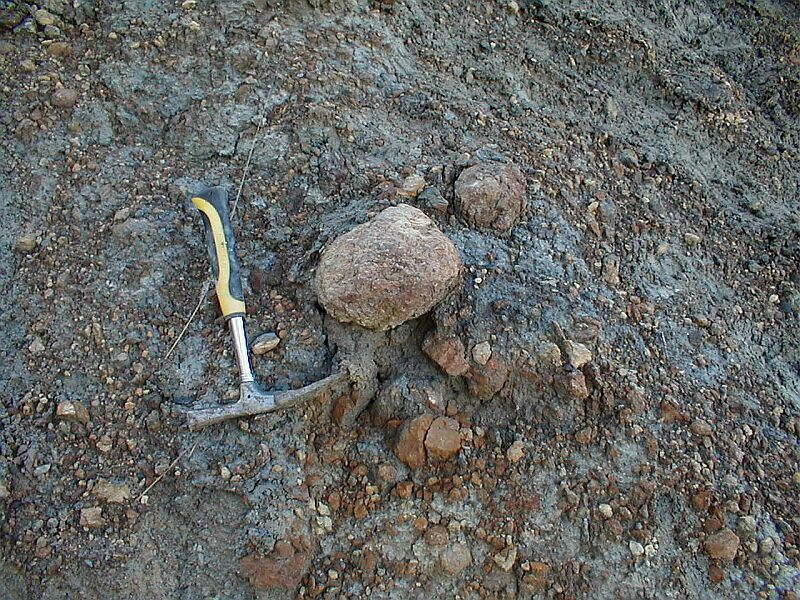 The occurrence of larger nodule-like segregated bodies within voluminous grit breccias is a common observation not only in the large Spanish impact structures but has counterparts also in the 25 km-diameter Ries impact structure in Germany which is shown and explained in Figs. 13 – 15.

Fig. 13. Part of the Barrachina megabreccia, Rubielos de la Cérida impact basin: a completely shattered and in part pulverized quartzitic rock (Daroca quartzitic sandstone?) that has preserved some ghost bedding. Right in the middle of the voluminous grit breccia a few segregated quartzitic blocks of roughly spherical shape have survived the intense destruction strongly reminding of the situation shown in Figs. 6 – 8. Detail in the photo to the right. 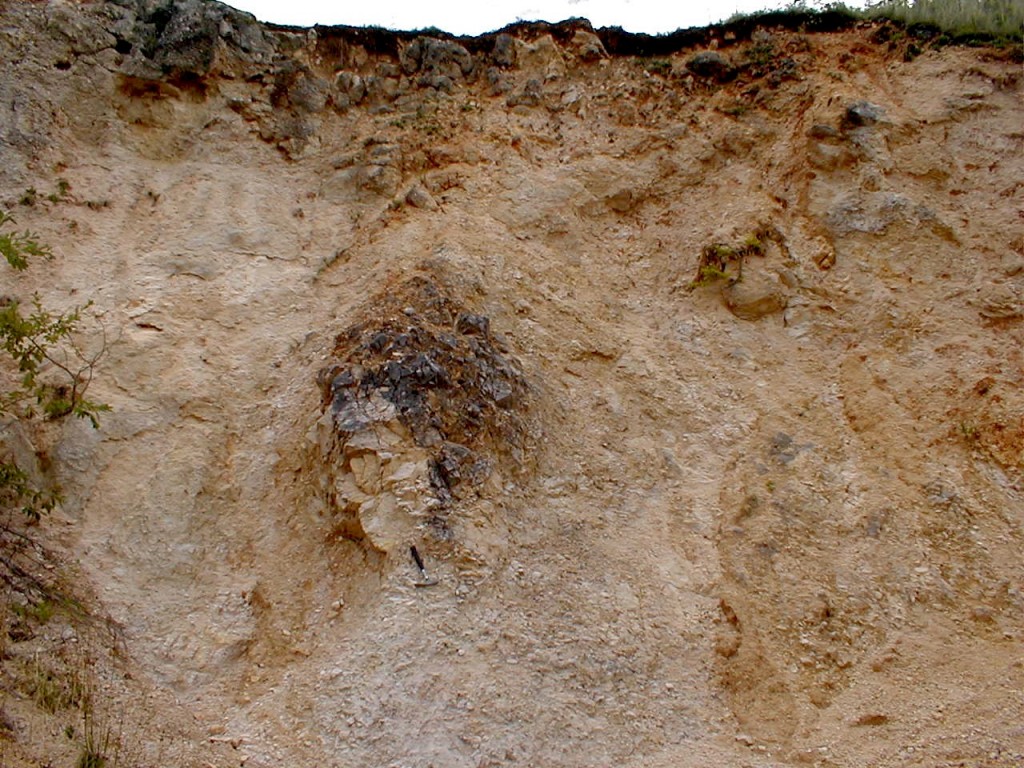 Fig. 14. Very similar situation in the Ries impact structure. The Iggenhausen quarry is located in a big dislocated megablock of Malmian limestone far outside the crater structure. The very competent limestone has been shattered to such a degree that the material can simply be exploited like in a gravel pit. The roundish megaclast with some preserved bedding appears to be surrounded by a halo of a slightly rotational texture. 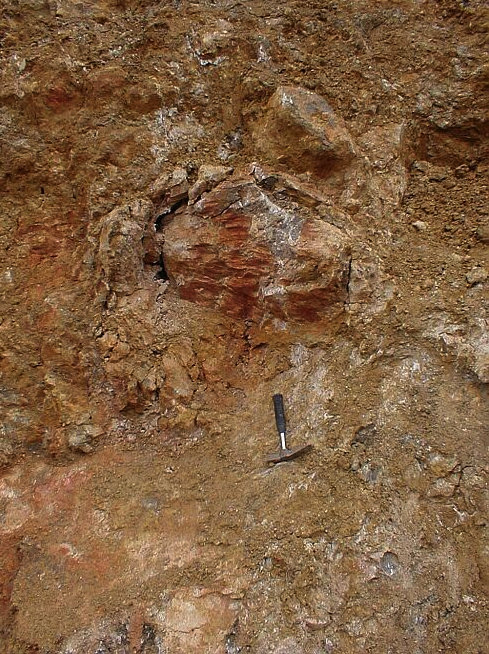 Fig. 15. Once more the Rubielos de la Cérida impact basin: eastern crater rim, road between Escorihuela and El Pobo. Voluminous megabreccias and grit brecciation of the Muschelkalk limestones/dolostones are hosting rounded blocks embedded in a kind of rotational texture of the grit breccia.

To begin with a clear statement, we are still unable to give an explanation for the formation of the Weaubleau “round rocks”. We aim at showing that similar features occur at another large impact site, and thus similar formation processes could possibly be indicated. To better understand the Weaubleau situation where the round rocks are weathering from a fallback breccia it may help to compare it with the Spanish in situ occurrences demonstrating how “round rocks” develop more or less autochthonously and simultaneously with the formation of and within voluminous grit breccias. Voluminous grit breccias or monomictic movement breccias (Reiff 1978) are a typical impact formation and may be diagnostic if, e.g., giant landslides to form these deformations can be excluded. Fracture-mechanically these heavy deformations through and through of extended volumes can be understood only if extremely high confining pressures are acting on the whole complex. In impact cratering these forces do exist considering the well-known processes of crater excavation and modification.

Obviously, confining pressure alone does not lead to a loosening up of competent rock units ending in the existence of selective spherical bodies within in a fine-grained gritty matrix. In addition radical movements are required, and on a smaller scale monomictic brecciation with the outcome of mortar texture may be an instructive analogue which we show and explain in Figs. 16 – 20. 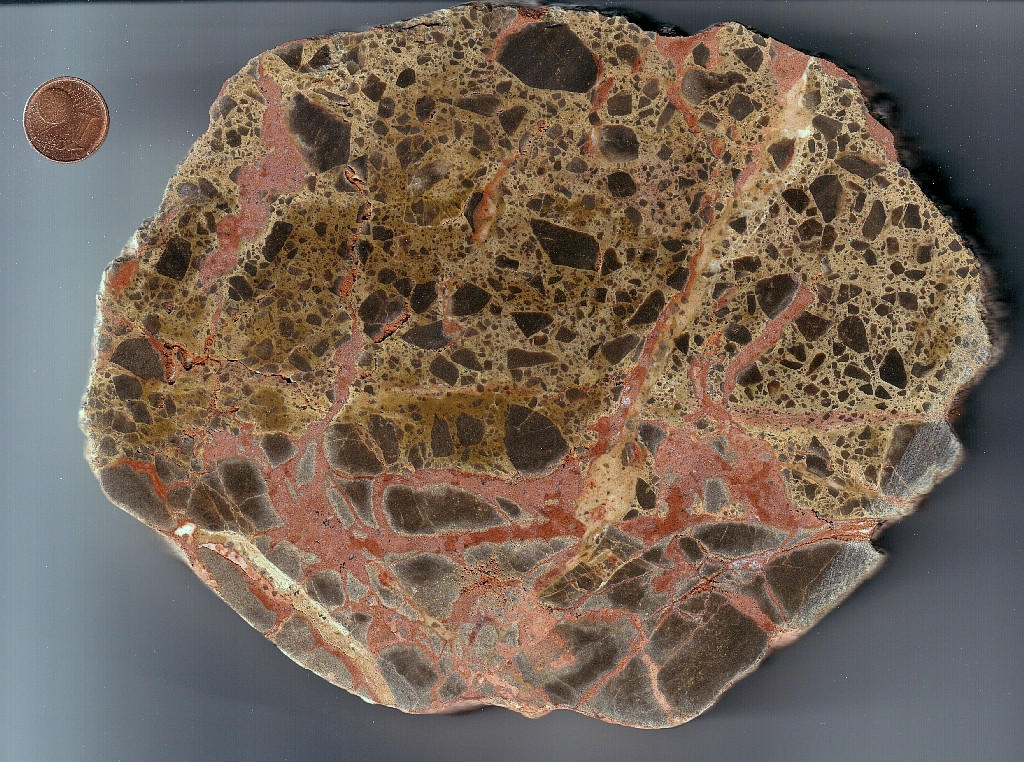 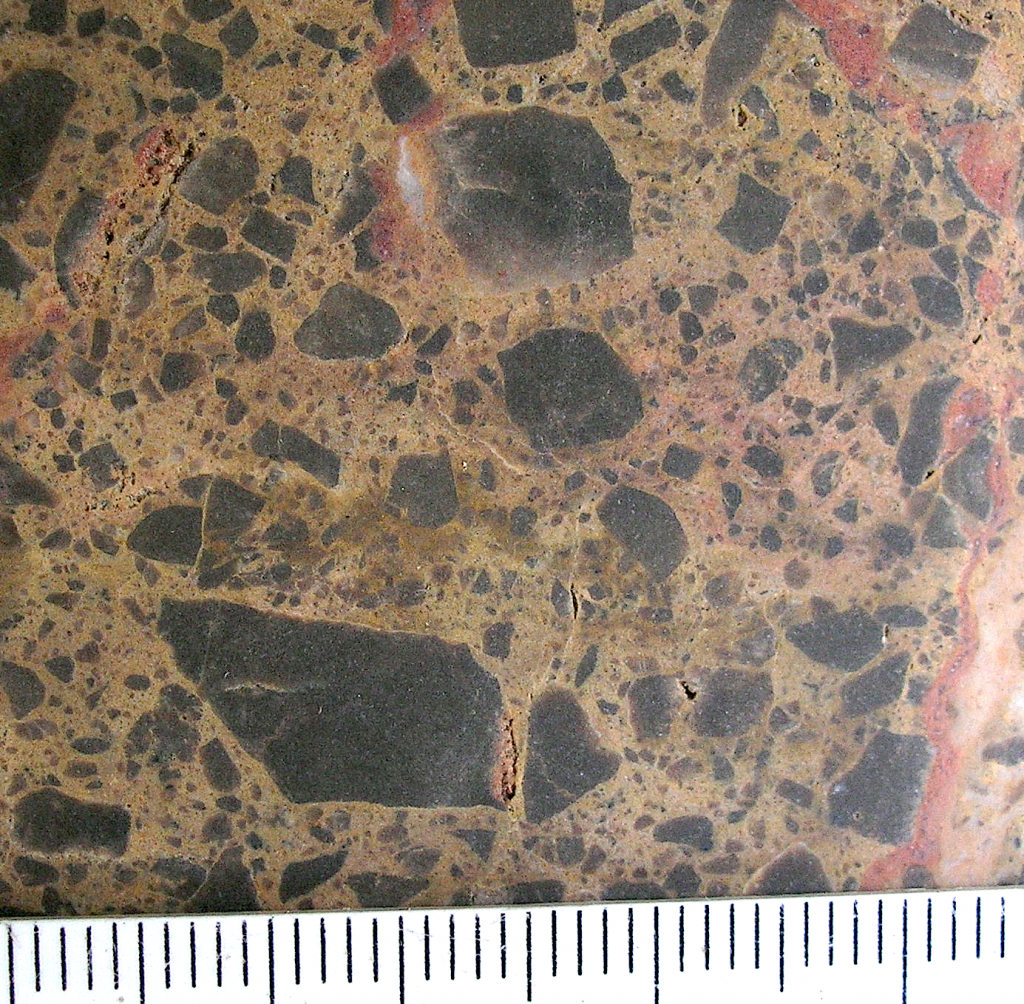 Fig. 18. Detail of the mortar texture of the breccia shown in Fig. 17 with individual clasts having in part become distinctly rounded. Polished section. 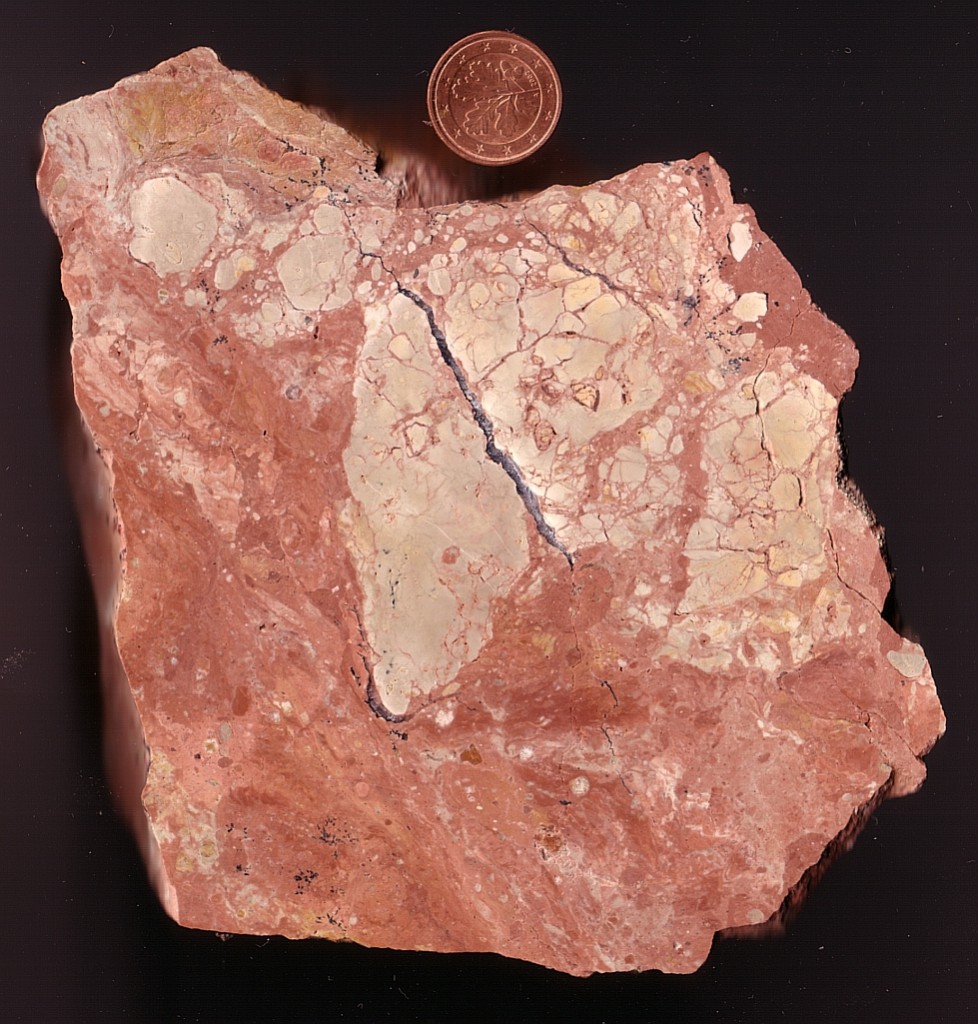 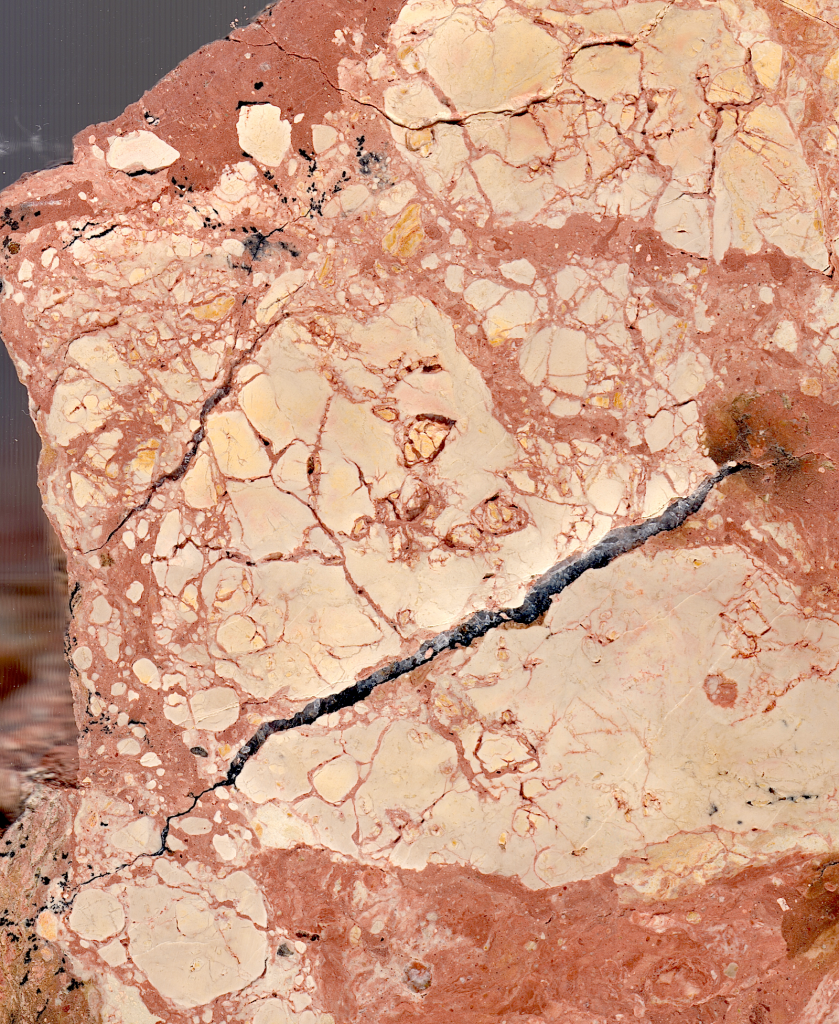 Fig. 20. Detail of Fig. 19: Probably the most instructive example of the in situ formation of spheroidal clasts probably supported by material flow (see Fig. 19) under high pressure.

The preceding figures suggest that the formation of larger spheroidal bodies and even ball-like clasts as observed in outcrops of very strong and voluminous monomictic destruction has much in common with deformations on a much smaller scale to produce monomictic breccias with distinct mortar texture. In particular Figs. 19, 20 demonstrate how ball-like clasts can develop yet in contact with and even inside the rock main mass if the decomposition acts under high-pressure flow. In the case of the larger-scale spheroidal body formation we suggest that in principle the same process takes place, and the “round rocks” are a few remaining nodular “bricks” that for whatever reason have survived complete brecciation within the gritty “mortar” in the course of the highly energetic impact cratering process.

The phenomenon of the “round rocks” is not restricted to the Weaubleau-Osceola impact structure but the formation of spheroidal clasts and larger nodular bodies is observed also in the Spanish large impact structures of Azuara and Rubielos de la Cérida and in the Ries impact crater. For the latter occurrences a formation in the course of an intense macro-scale brecciation of larger rock complexes in the impact cratering process requiring movements under high confining pressures is suggested. The “round rocks” are remnants in a voluminous monomictic breccia with a macro-mortar texture. Fracture-mechanically the rounding may be an effect roughly similar to the rounding of cobbles in a stream to form in the end true conglomerates. The basic difference is the very short duration of the impact in situ conglomeratization enabled by the high confining pressure during the movement. In any case, the “round rock” formation has nothing to do with the well-known spheroidal chemical weathering that creates rounded boulders also in situ.

As for the Weaubleau-Osceola “round rocks” our explanation may apply but not necessarily, and we may point to convergence that is quite different processes may lead to the same outcome. For the time being, our contribution here is a proposal to consider whether the “Weaubleau eggs” originally formed also in an impact brecciation process before they were displaced and silicified.