Suevites in the Spanish impact structures in an up to 10 km thick sedimentary target have so far been found in two different outcrop situations:

— as large blocks quarried out from a megabreccia in the Rubielos de la Cérida basin.

The name basal breccia refers to its stratigraphic position at the base of the undisturbed post-impact (and post-Alpidic) layers. The polymictic and rather heterogeneous breccia is up to c. 20 m thick and is found in many parts of the Azuara and Rubielos de la Cérida structures unconformably overlying the Alpidicly folded and impact-deformed sediments of the Iberian System (Fig. 1). 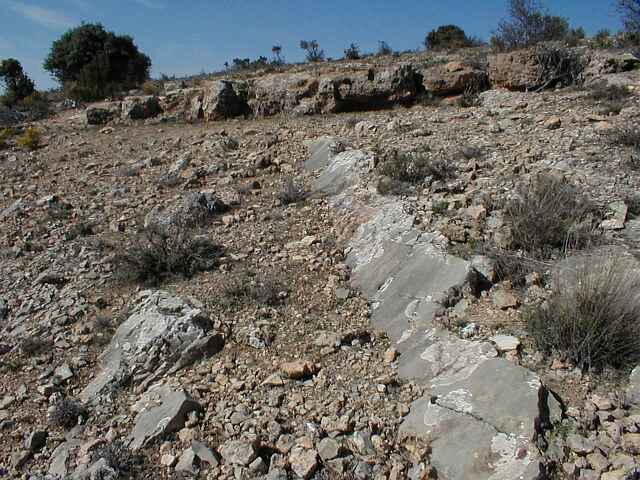 Both Paleozoic and Mesozoic rocks contribute to the matrix-supported breccia components which are angular to sharp-edged, but well-rounded components are also observed. Frequently, they show distinct reaction seams in contact with the matrix. Breccia generations (breccias-within-breccias) are abundant. The sharp-edged clasts, especially the limestone fragments, suggest an immediate embedding after the brecciation and mixing of the Paleozoic and Mesozoic components. Breccia specimens break into pieces across the clast boundaries due to the extremely hard matrix and an exceptional cementation.

The matrix is composed of calcite and (from X-ray fluorescence analysis) up to 10 % Si02. X-ray diffraction analysis and thin-section inspection with strong magnification, however, could only identify minute traces of quartz and silicates (e.g., mica). The major fraction of the Si02 content is thus expected to be in an amorphous phase finely dispersed within the breccia matrix. In rare cases, however, tiny glass fragments (see Fig. 4) can be observed in thin sections of the basal-breccia matrix, and we assume that the amorphous phase is glass, too. This would well fit a model by Kieffer & Simonds (1980) which explains the obvious absence of impact melt sheets in and around craters from sedimentary targets. The authors conclude that the large amount of shock-produced volatiles (from pore-water vaporization and limestone decarbonization) in sedimentary targets prevents melt-sheet formation and, instead, finely disperses the shock-melted material.

We further note that thin sections show shock-metamorphic effects in the form of PDFs and PFs in quartz as well as diaplectic quartz. Thus, the basal breccia as a polymictic breccia with glass components and mineral clasts displaying shock metamorphism, is a typical suevite or suevite breccia.

The question arises whether the basal breccia may alternatively be considered an impact melt rock (according to the IUGS nomenclature; see discussion here: http://www.impact-structures.com/impactmeltpage.html ) that by definition has a matrix solidified from a shock-produced melt. In the Azuara/Rubielos de la Cérida case this would apply if the basal-breccia matrix had predominantly crystallized from a carbonate melt. Here we note that components of the basal breccia are regularly observed (see images below) to have undergone partial up to nearly complete decomposition which is obviously connected with flow texture of the basal breccia matrix. These zones were analyzed in detail by Katschorek (1990), and she was able to establish the presence of former carbonate melt. For the time being, the true character of the basal breccia impactite remains subject for discussion. 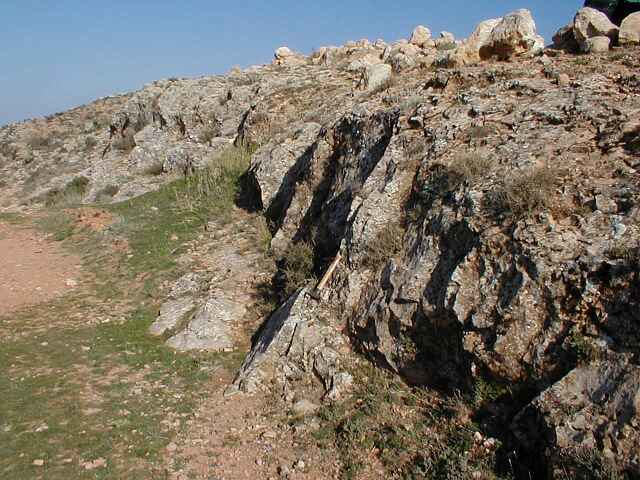 Fig. 2. Massive outcrop of the Cucalón fine-grained suevite (basal breccia). Note the steeply dipping platy jointing which has possibly originated from cooling of the suevite body. 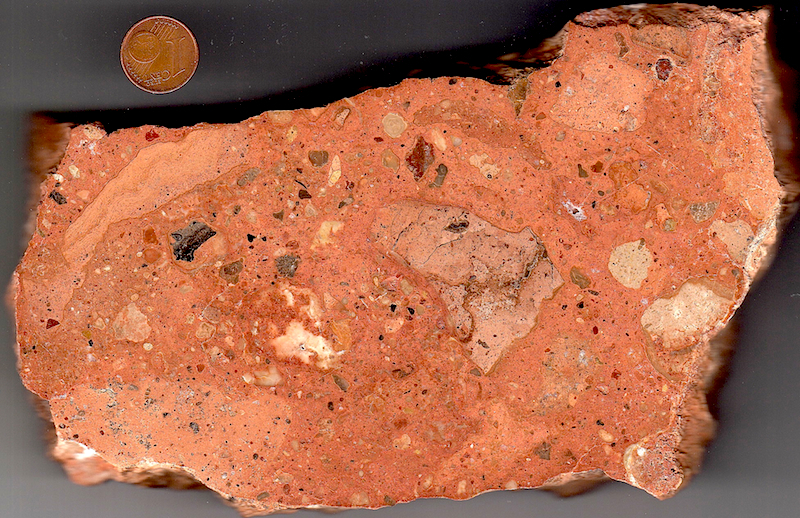 Fig. 3. Suevite (basal breccia) near Cucalón, Azuara structure. – Geologists from the Zaragoza university considered the Cucalón suevites a normal lacustrine limestone they had allegedly drilled near Nombrevilla roughly 10 km off the Cucalón deposit.

Fig. 5. Glass in the Cucalón suevite (basal breccia). Within a carbonate matrix, the glass fragment with fluidal texture is located in a small void lined by calcite crystals. Photomicrograph: xx nicols and plane light; the field is 240 µm wide. 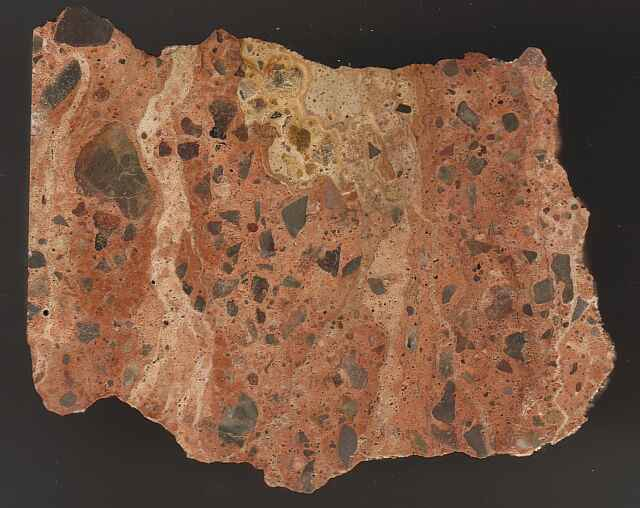 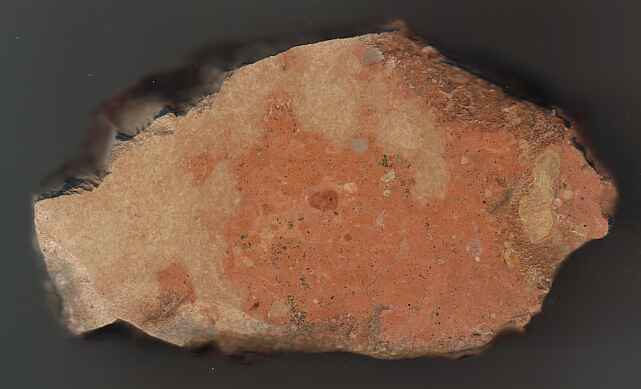 Fig. 10. Suevite, fine-grained variety, detail; the field is 2.5 cm wide. Note the many well-rounded clasts, flow texture and the obscure grayish/whitish matrix material. The matrix is assumed to result from decarbonization/melting and recombination/crystallization of carbonate target rocks and, in the strict sense, this variety could be an impact melt rock. Also note the accretionary lapillistone texture.

Fig. 11. Another variety of the fine-grained Cucalón suevite with a reddish matrix and only very small-sized clasts grading into the matrix and reminding of a lapillistone. 10.5 cm maximum size of the sample. 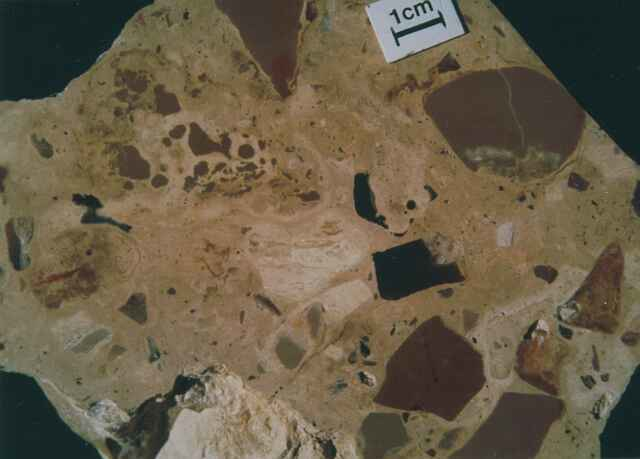 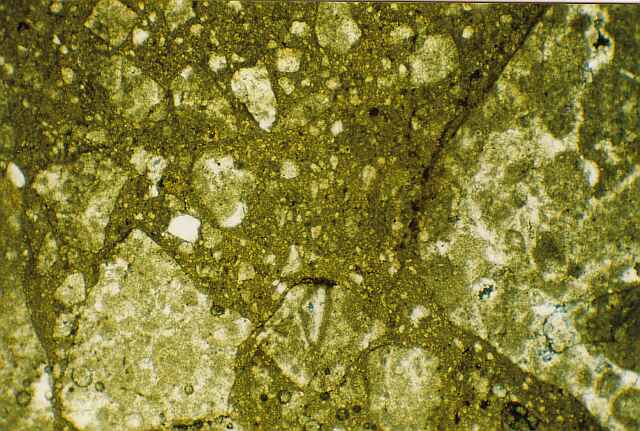 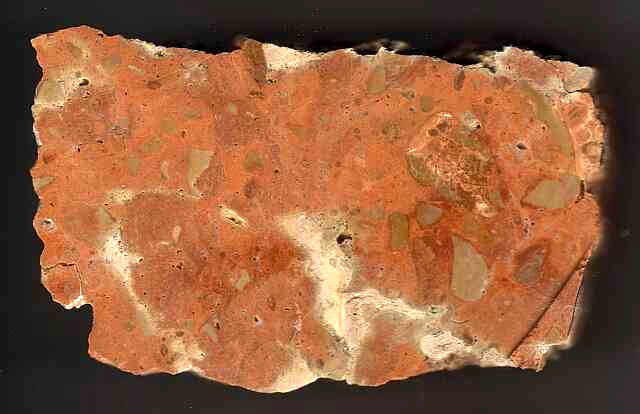 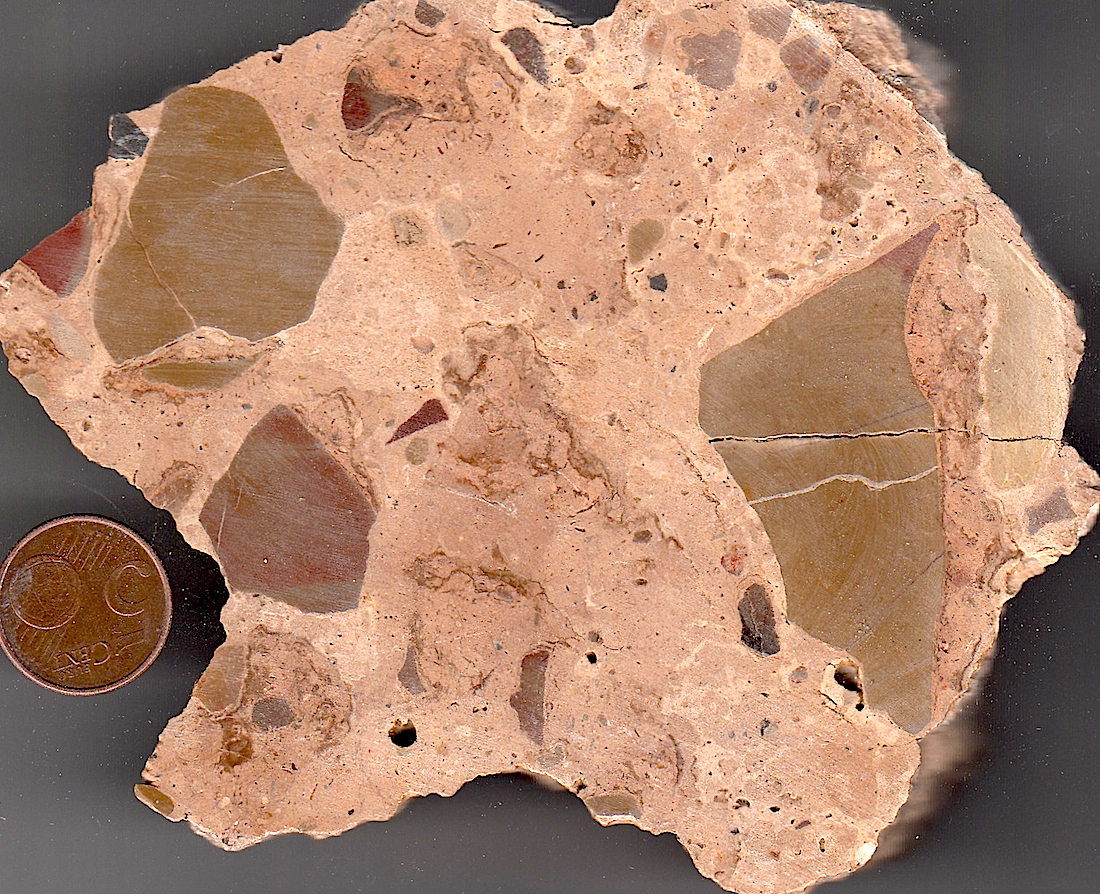 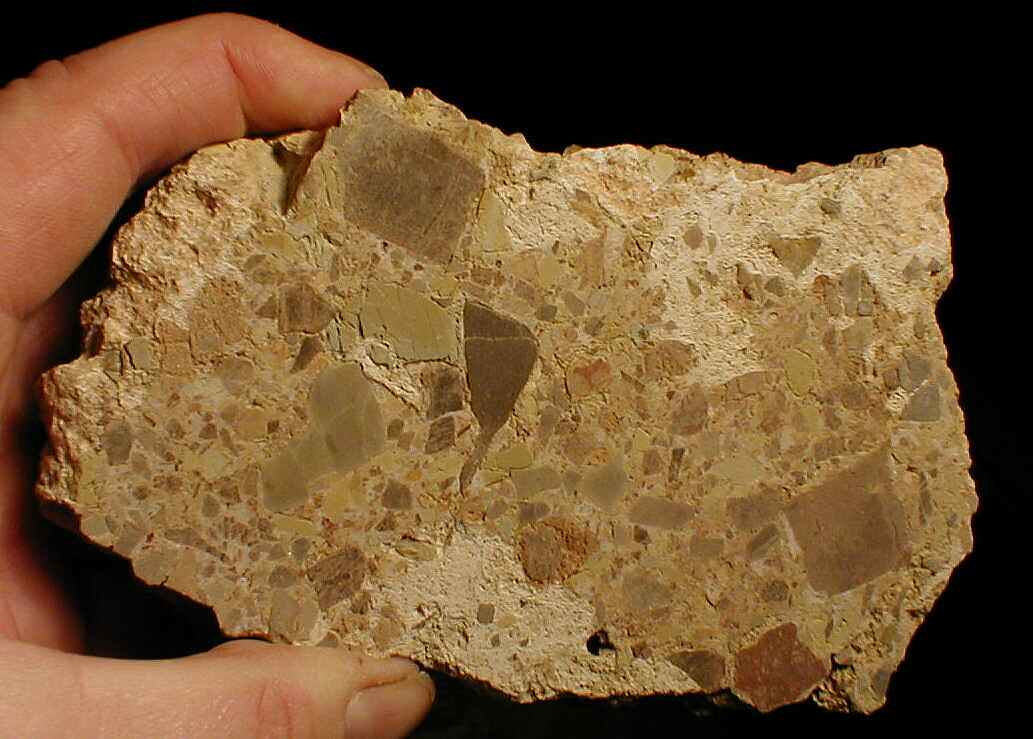 Fig. 18. Azuara impact structure: Polymictic basal breccia. Note the flow texture and the grading of the components which are preferentially adjusted to the flow. Exposed near Monforte de Moyuela. The red color of many limestone clasts is a result of the impact heating. 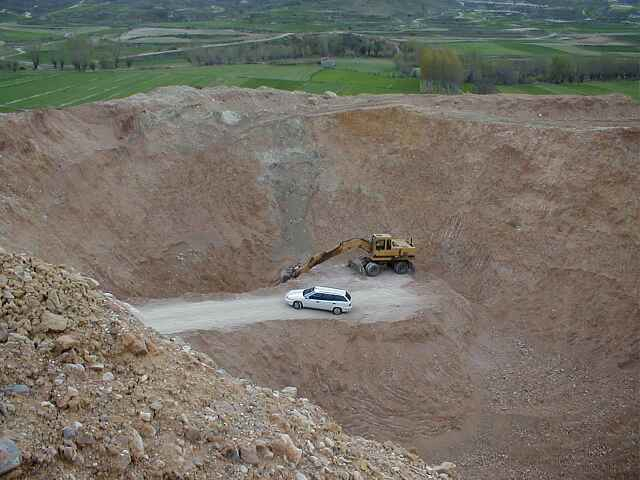 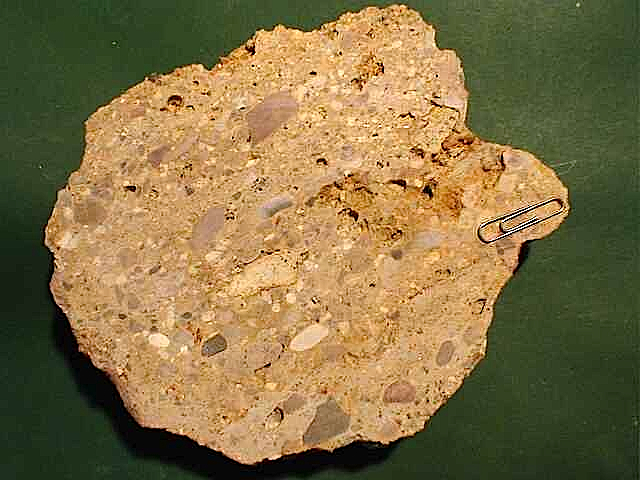 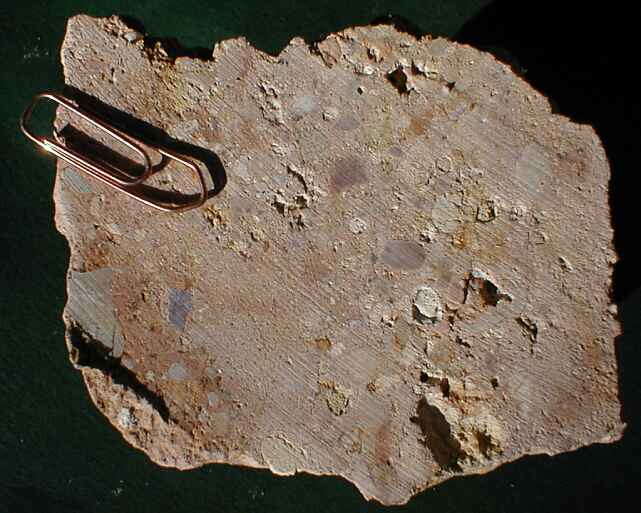 Fig. 21. Rubielos de la Cérida suevite sampled from the quarry in Fig. 19. Like in the sample from Fig. 18 silicate melt is concentrated in the porous clasts. 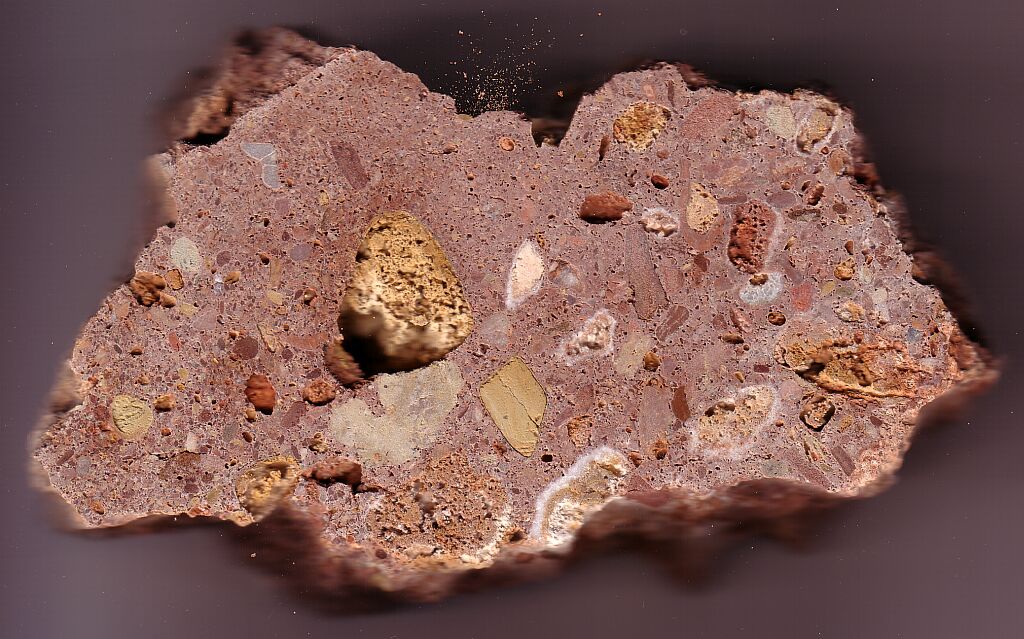 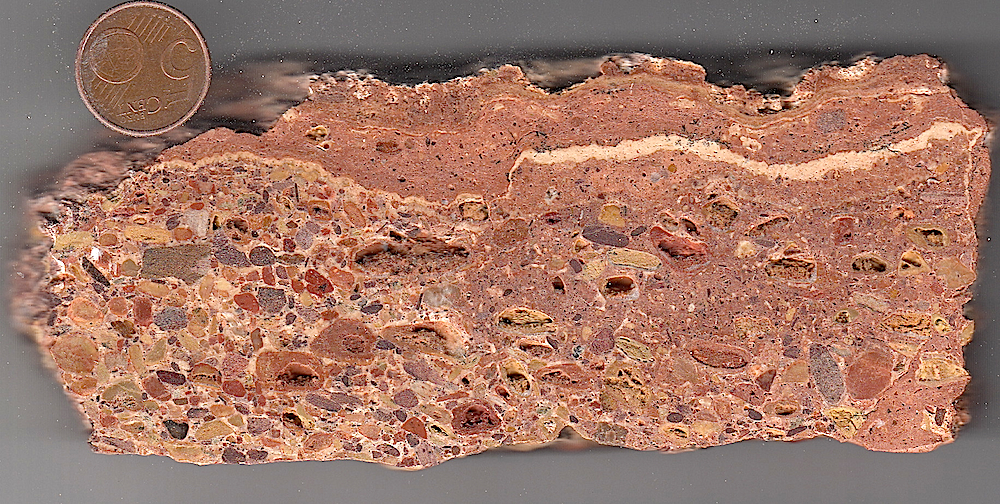 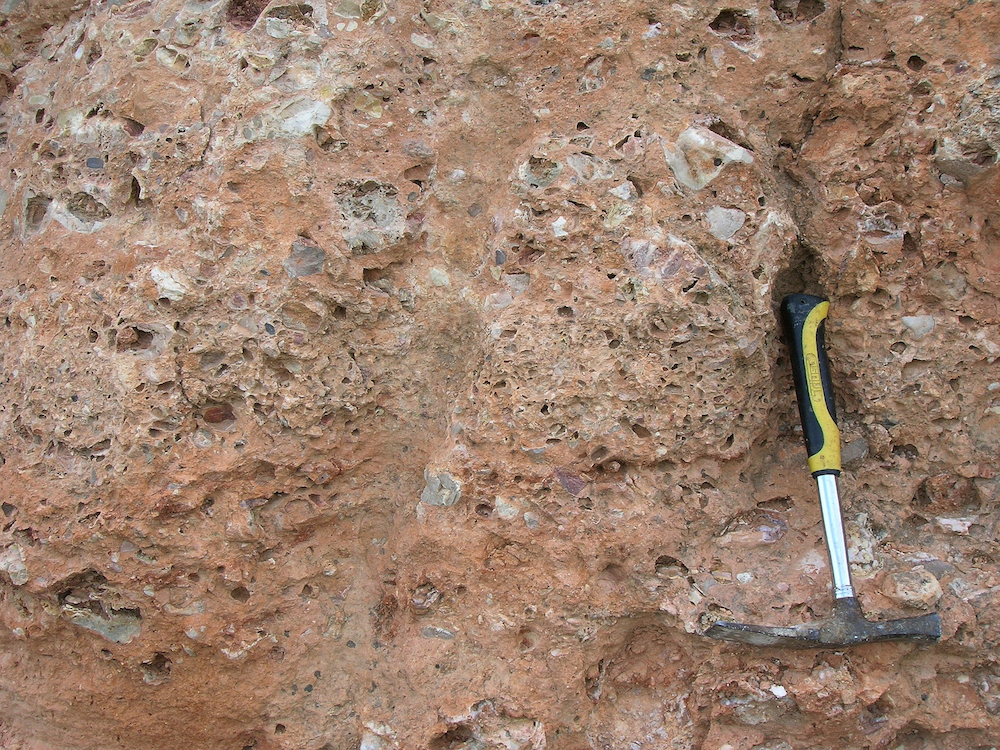 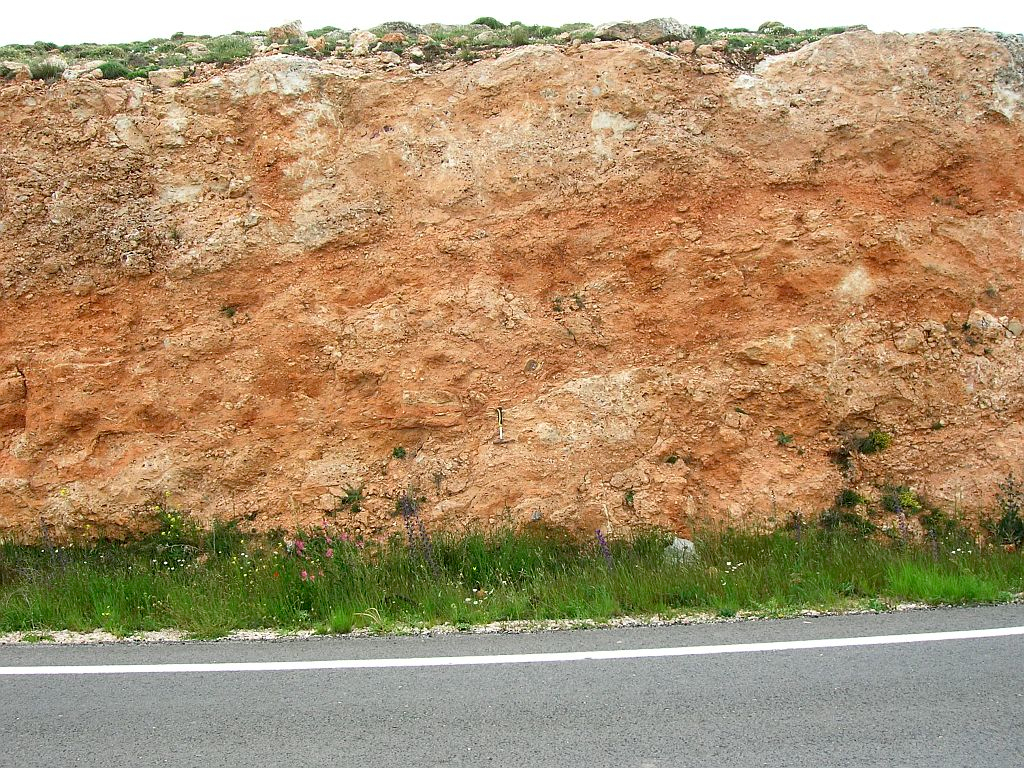 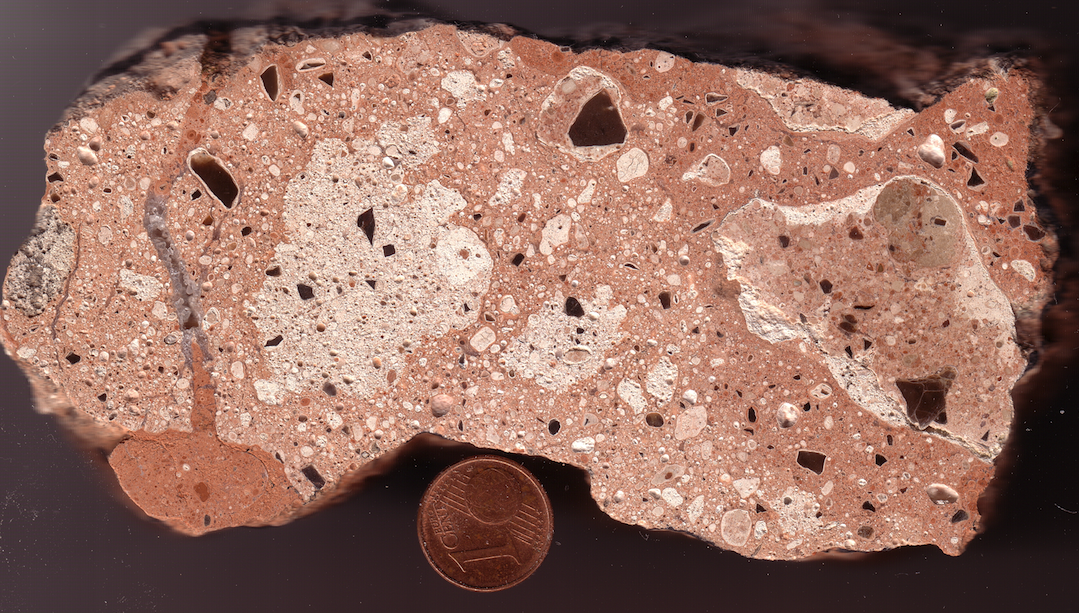 Fig. 29. Suevite from near Escriche, south-eastern rim zone of the Rubielos de la Cérida impact basin. This suevite distinguishes by its varying lapillistone matrix and the few sharp-edged (Muschelkalk ?) fragments.

Remarkable suevite (basal breccia) varieties are outcropping between Olalla and Fonfría in near contact with the large impact ejecta deposit of the Pelarda Formation in the northern rim zone of the Rubielos de la Cérida impact basin but also in near contact to the rim of the Azuara impact structure. 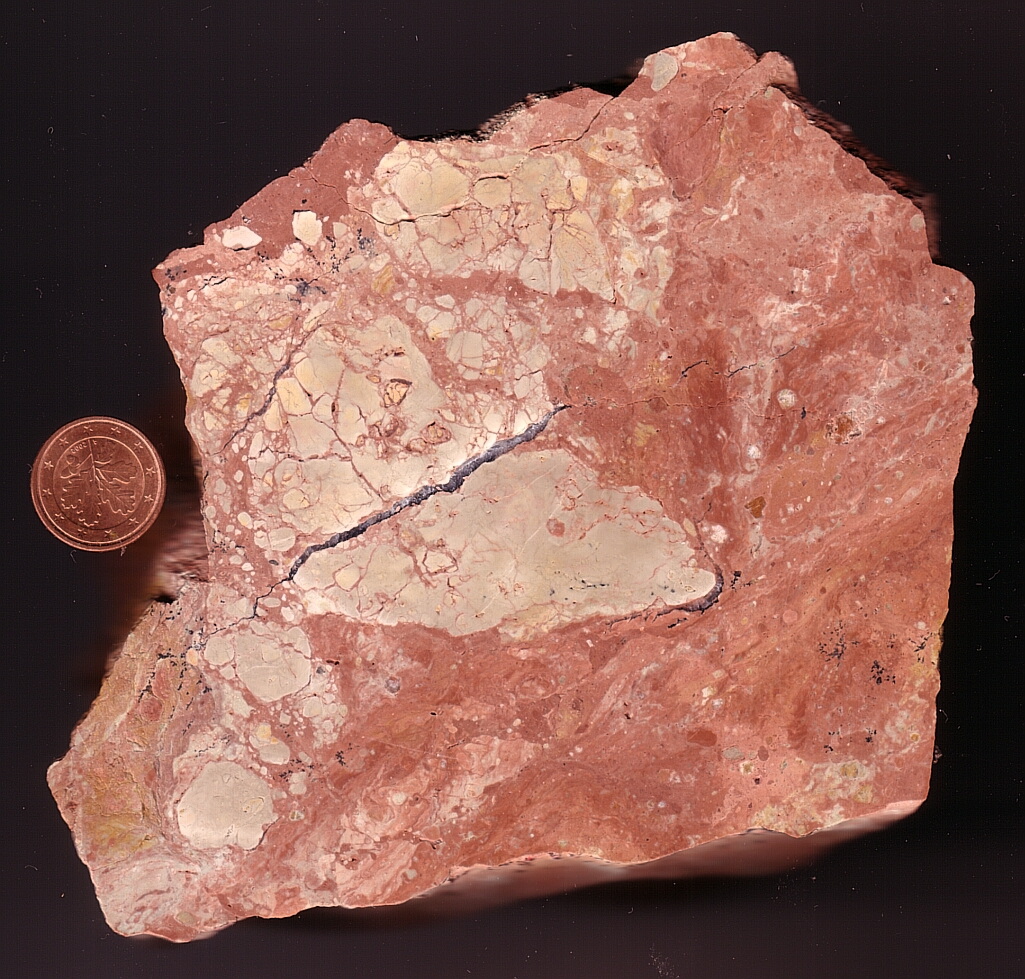 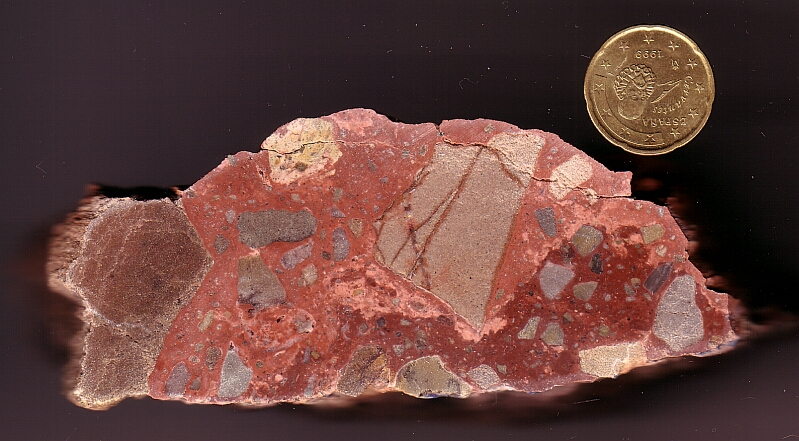 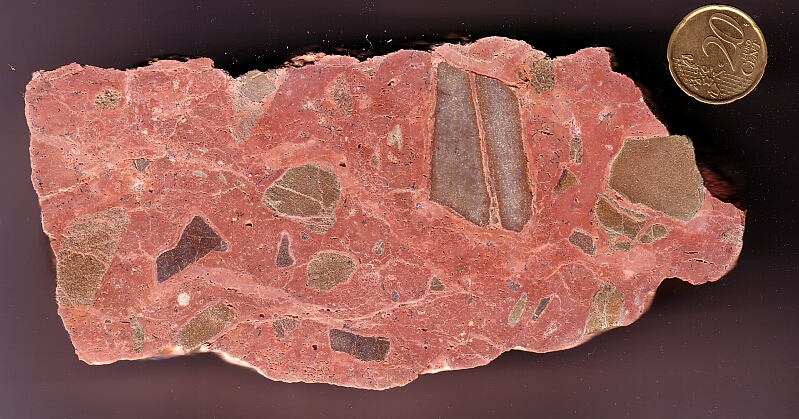 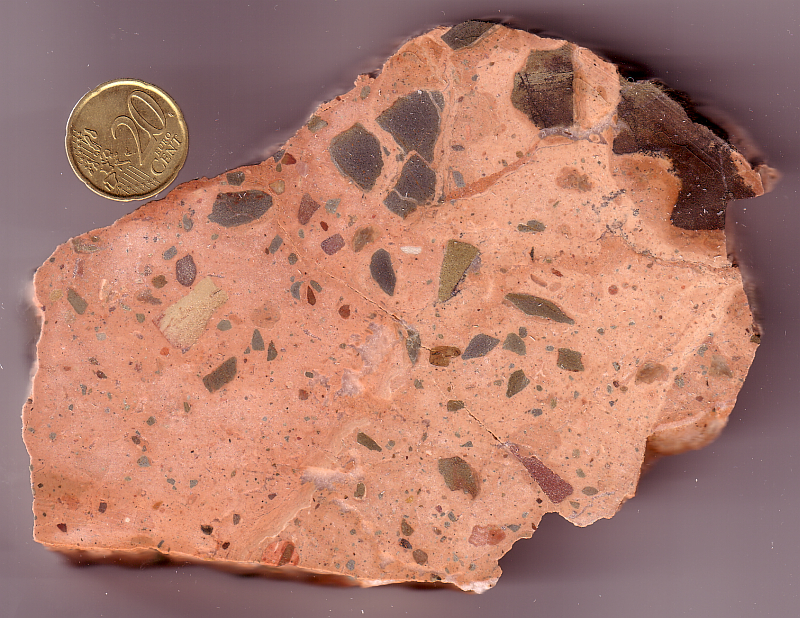 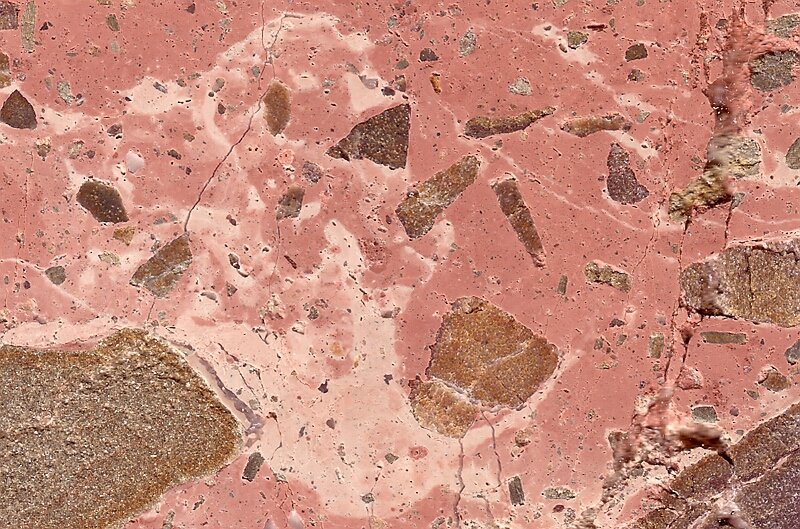 Fig. 34. Close-up of a suevite breccia from the outcrops near Olalla, Rubielos de la Cérida impact basin. The whitish parts of the matrix could be relics of carbonate melt. 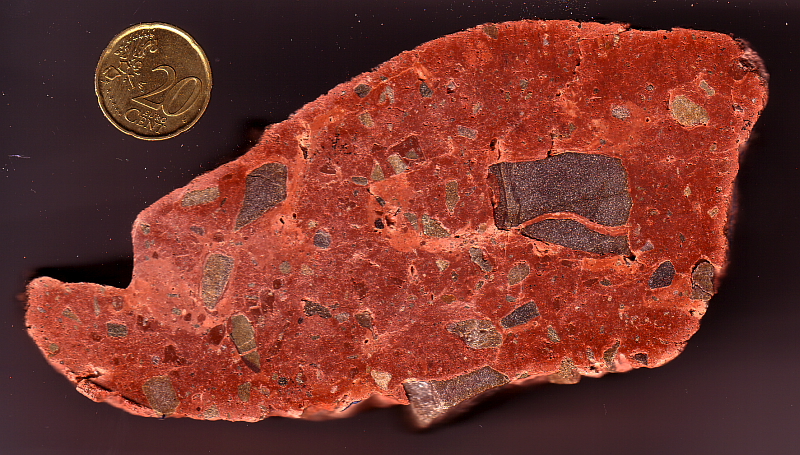 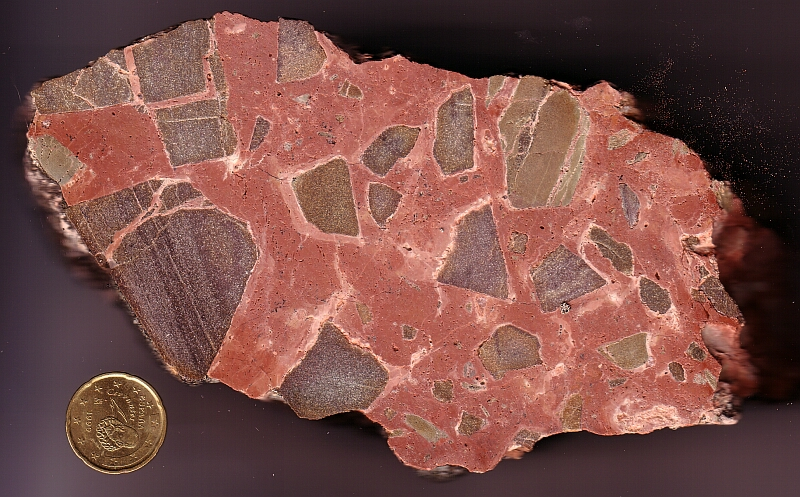 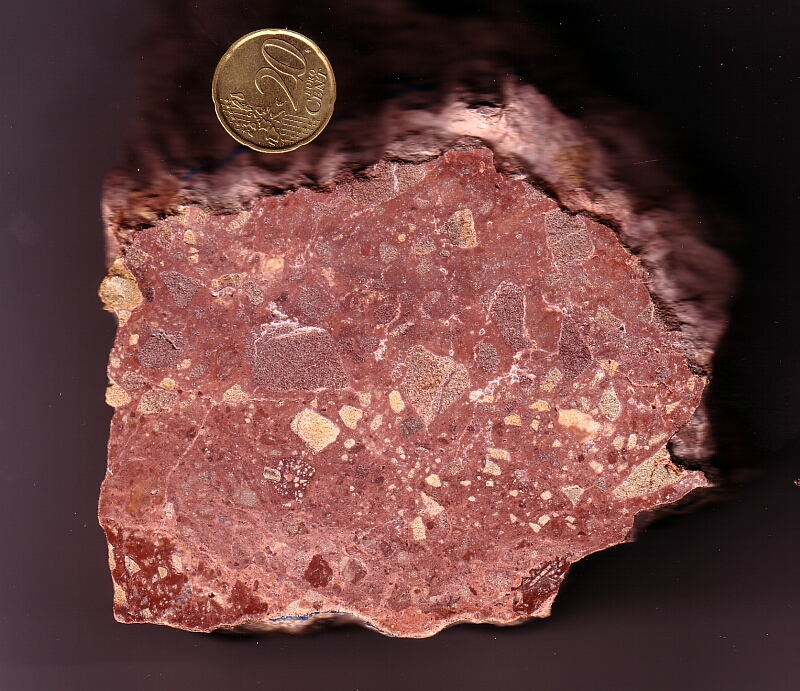 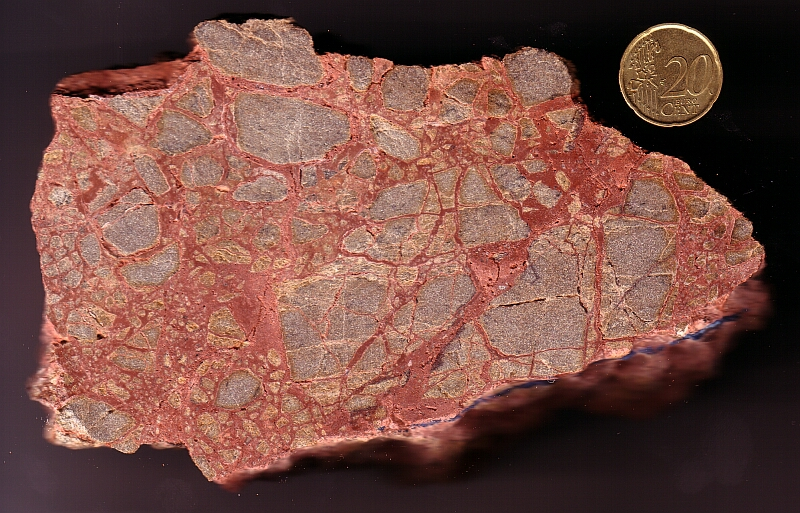