The controversy: The Spanish impact structures and competing models of an endogenetic origin

At the beginning of the sixties, scientists opened the discussion about meteorite impact as a remarkable geologic process on Earth and other solid planets and their satellites, and at the end of the seventies, the late Eugene Shoemaker characterized impact as the possibly most important geologic process in our planetary system. The discussions at that time are well reflected by the books: Shock Metamorphism of Natural Materials (French, B.M. and Short, N.M., eds.), Mono Book Corp., Baltimore, 1966 and Impact and Explosion Cratering (D.J. Roddy, R.O. Pepin, R.B. Merrill, eds.), Pergamon Press, 1977.

On the other hand, many geoscientists, mainly from geology, strictly refused acceptance and considered impact structures rather obscure objects. In the 1953 vol. 37 of the respected Bull. Am. Assoc. Petrol. Geol., the geologist D. Hager published a 30 pp. paper on the Barringer Meteorite Crater in Arizona. In this article, the generally accepted impact crater is again regarded as an endogenetic structure and an “explosion” origin denied. Instead, a graben-like sinkhole formed by evaporite dissolution is postulated – a common feature in the regional geology there. The many iron meteorites spread around the crater are considered to be from a later meteorite shower and purely incidential. – The evaporite dissolution model will come across us again with the Spanish regional geologists refusing the Azuara impact event. 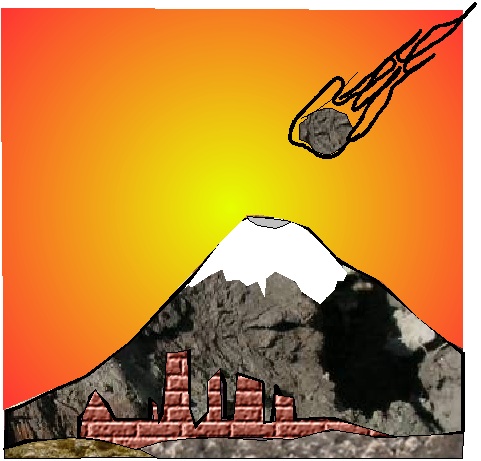 In an article published at the beginning of the eighties in the journal “Die Naturwissenschaften”, a professor of geology from New Zealand claimed an endogenetic origin for most of the impact structures established at that time, the Barringer crater in Arizona included. The iron meteorites around the crater were in this case regarded by him as material originating from the deep mantle.

” … as recently seen when the myth of flying saucers and of meteor impact craters swept around the world and even affected the scientists” (!!!)

At the same time, an intense controversy about the origin of the 25 km-diameter Ries crater in southern Germany arose, when Shoemaker and Chao had established the coesite and stishovite SiO2 high-pressure modifications in suevite samples of that ring structure. After 100 years of a volcanic-origin model, the so-called Ries problem or Ries enigma seemed to have been solved and an impact origin very probable. The opposition of most geologists was vehement. Their arguments were based on the peculiar features of the regional geology: The Miocene Ries crater is located in the southern Germany volcanic province of Upper Tertiary age, a tectonic lineament is running through the structure, it is situated in the vertex of a basement uplift and at a regional facies border. This and much more was stated again and again, even when there were no doubts left about an extraterrestrial origin of the Ries structure.

Once more in 1987, on occasion of an impact workshop held in Parys (South Africa), the opposition against the Ries as an impact structure and the regional-geology arguments were articulated. Prof. Nicolaysen from Johannesburg, not exactly an unknown scientist, contributed a paper about the Ries and Steinheim Basin paired impact structures, again pointing to the pecularities of the regional geology and the apparent association with tectonic features.

But the story does not end here. In 2003, at the Geological Society of America (GSA) meeting in Seattle, R.A. Zimmerman claimed again an enodogenetic, diatremic origin for the Ries crater:

We see, in the game impact versus endogenetic origin, again and again and world-wide, the regional-geology card is played, however without any worth. Impacting a planetary target is a purely statistical process, and a cosmic projectile impacting the earth does not show any consideration for regional geology. Moreover, there is hardly any point on the earth’s surface, where there is not a geologic anomaly in the form of regional gravity or geomagnetic special features, tectonics with crossing faults, a regional facies border, a dome, a basin, volcanism, salt diapirism … Poor meteorite – where to fall and not to confuse geologists?!

The vehement opposition of many geologists (especially from the Zaragoza university and (few) from the Center of Astrobiology, Madrid) against the impact origin of the Azuara and Rubielos de la Cérida structures in Spain and the regional-geology argumentation show that the nearly 50 years old learning process is still going on.

Here, we will present the most important complexes of the controversy, we will discuss the observations in relation to the impact cratering process, and we will point to the completely different way of looking at the situation by the Zaragoza (and few Madrid) geologists.

Unfortunately and unexplicable in every detail, a few obviously influential persons of the so-called impact “community” (whatsoever it is) have cast their lot with the Spanish deniers of the Spanish impacts culminating in the elimination of Azuara from the Canadian impact database at the University of New Brunswick (managed by J. Spray). Also this odd thing will closely be addressed here on our Controversy page.

Click here the single pages to this unsightly controversy: