Accretionary lapilli is a term originally solely related with volcanism. Accretionary lapilli are pellets that form by the accretion of fine ash around condensing water droplets or solid particles, particularly in steam-rich eruptive columns. Commonly, they exhibit a concentric internal structure, and, once formed, they can be transported and deposited by pyroclastic fall, surge, or flow processes (Allaby & Allaby, 1999; A Dictionary of Earth Sciences). Armoured lapilli is the term that is especially used in the case the ash has accumulated around a small rock fragment. The armoured-lapilli variety is frequently found in deposits of basaltic base surges. 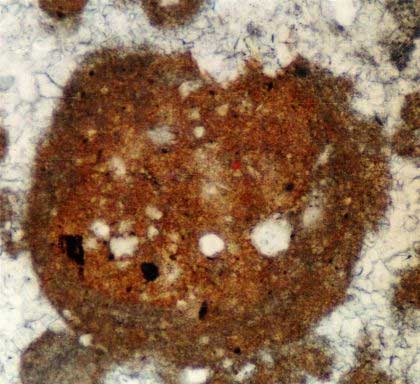 Since similar processes are related with the turbulent explosion plume raising above the expanding excavation cavity in an impact cratering event, it is not surprising that accretionary lapilli have been found also in impact deposits. Graup (1981) describes accretionary lapilli to occur in the suevite fall-back breccia of the Ries impact structure. They are also reported for ejecta deposits of the K/T Chicxulub impact structure in Mexico (http://www.lpi.usra.edu/meetings/metsoc2000/pdf/5124.pdf,
http://www.lpi.usra.edu/meetings/largeimpacts2003/pdf/4113.pdf) and Belize (http://www.icdp-online.de/news/workshops/abstracts/EGS03/EAE03-J-06925.pdf).

Concentrations of lapilli formed lapillistone that occurs as discontinuous, reworked clasts within the megabreccia related with the Late Devonian Alamo impact (http://gsa.confex.com/gsa/2002AM/finalprogram/abstract_42158.htm).

For the Azuara impact structure, accretionary lapilli was first reported by Mayer (1990). Image 1 shows a typical lapillus from the matrix of the basal suevite breccia near Muniesa. The interior is composed of very badly sorted material (calcite, quartz, ore). The rim zone is formed by concentric layers of finer material (mostly micritic calcite). Similar accretionary lapilli are observed also in the matrix of Azuara breccia dikes. 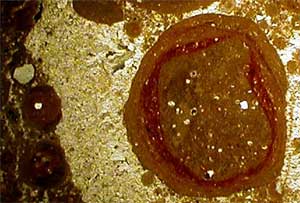 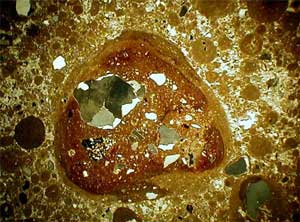 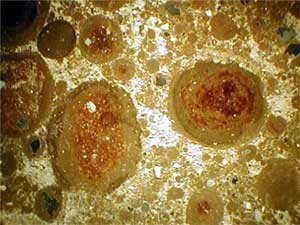 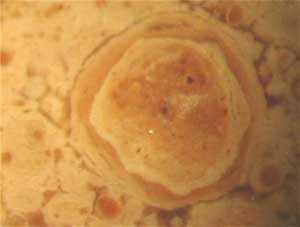 Images 2 – 5 show accretionary lapilli from the basal suevite breccia near Corbatón in the Rubielos de la Cérida impact basin. The lapilli are basically carbonate with some accessory silicate material (e.g., quartz fragments, Image 3) and regularly exhibit the typical “onion skin” internal structure. The angular core of the lapillus in Image 5 probably is a fragment of a former lapillus thus reflecting some kind of reworking in the lapilli formation and deposition process.

Near the village of Olalla in the northern rim zone of the Rubielos de la Cérida impact basin, a prominent breccia dike is exposed (Images 6, 7). In the early seventies, in the course of his geologic mapping activities, W. Monninger called this dike “Teufelsmauer” (Devils Wall) because of its peculiar structure and composition. At that time, impact processes and impact rocks were not well known among geologists. 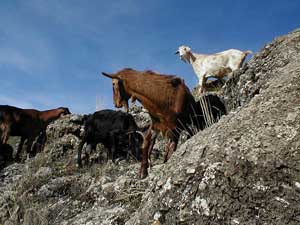 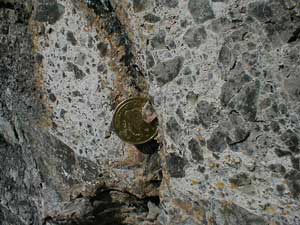 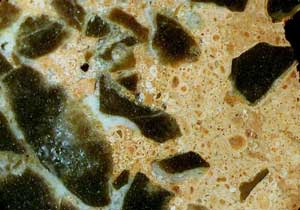 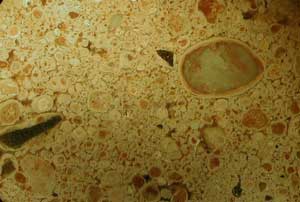 Images 8, 9: The matrix of the Devils Wall breccia dike composed of accretionary lapilli. The whitish crusts of some breccia fragments are suggested to result from high-temperature decarbonization of limestone. Polished sections, the fields are 13 and 15 mm wide.

In polished sections (Images 8, 9), the matrix of the carbonate dike breccia for the most part proves to be completely composed of accretionary lapilli (lapillistone). Limestone fragments from the disintegrated host rock of the dike abundantly make up the core of larger lapilli. In doing so, the fragments my be broken but still remain coherent within the lapillus, as can be seen in Image 10. This shows that the accretion process continued upon injection of the vapor plume material into the host rock. 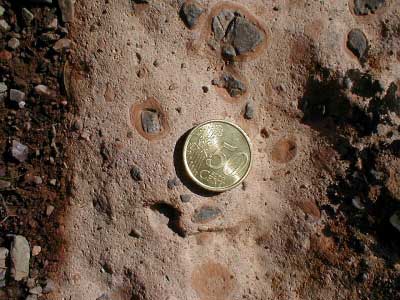 Image 10: Fragments of the breccia dike host rock make up the core of larger accretionary lapilli.

Regional geologists from Spain (M. Aurell, E. Díaz-Martínez, A. L. Cortés, and others) vehemently refusing the impact origin of Azuara and Rubielos de la Cérida, suggest the basal suevite breccia and breccia dikes to be diagenetic, pedogenetic or karstification features. For these geologists, the accretionary lapilli is calcrete (caliche).