A dike in the common geological sense is a mostly tabular body of different materials (minerals, rocks, ores) cross-cutting the host rock. In impact structures, breccia dikes have played an important role in the understanding of the impact cratering process. They have been reported from many impact structures, and they have in detail been investigated e.g. for the Rochechouart (France; P. Lambert, W. Oskierski & L. Bischoff) and the Azuara/Rubielos de la Cérida (Spain; J.Fiebag) structures.

The overabundant inventory of impact breccia dikes and their in general brilliant exposure in the large Spanish impact structures is certainly non-pareil in all other impact structures worldwide. So much the worse that Spanish regional geologists and leading researchers of the so-called impact “community”, the Canadian New Brunswick impact database included, are still steering clear of the prominent Spanish impact structures. (More about this unbelievable situation in the Controversy section.)

Although frequently very similar in outcrop conditions, breccia dikes should not be confused with impact pseudotachylites (see http://www.impact-structures.com/impact-rocks-impactites/impact-melt-page-impact-melt-rocks-impact-glasses-and-congeners/). By definition, pseudotachylites are characterized by a melt rock matrix clearly different from the clastic matrix of dike breccias.

Among the many various types of impact breccia dikes in the big Spanish impact structures a so-called H-type is often observed. A model of formation is shown in Fig. 1. 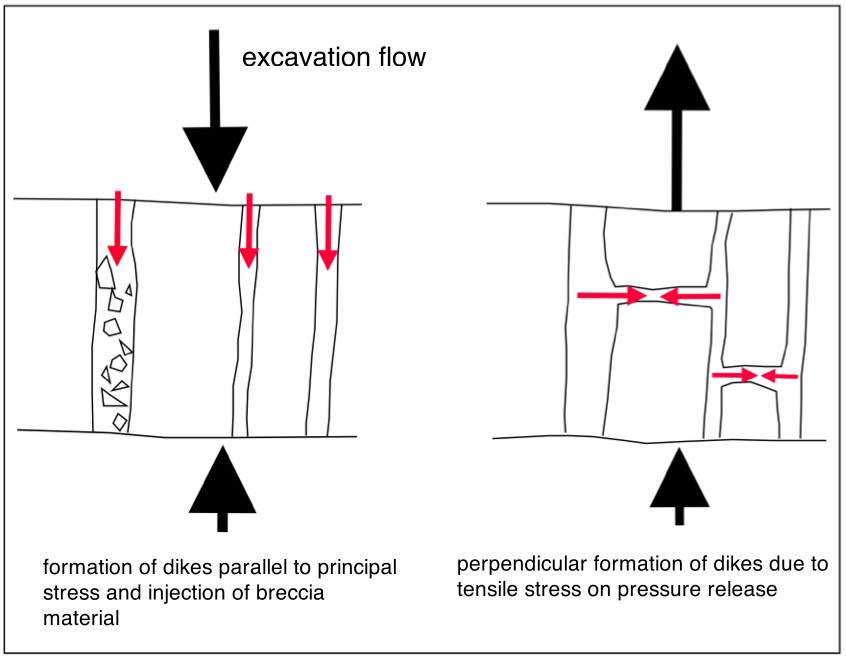 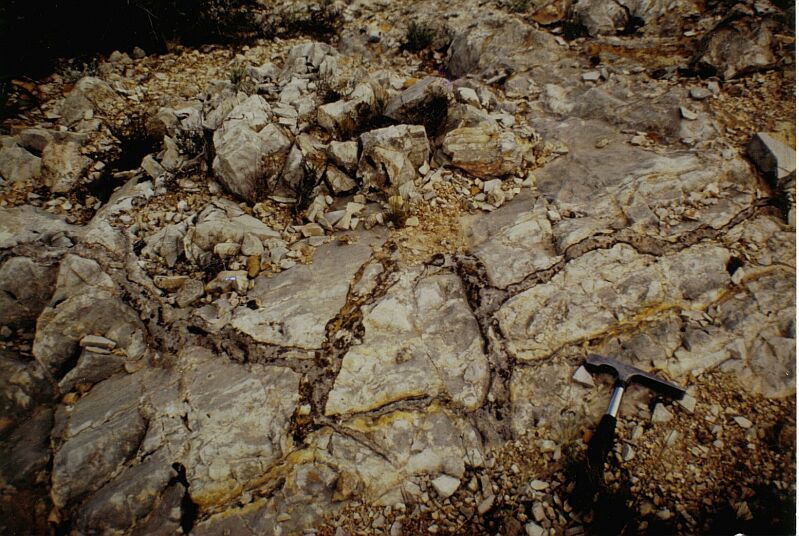 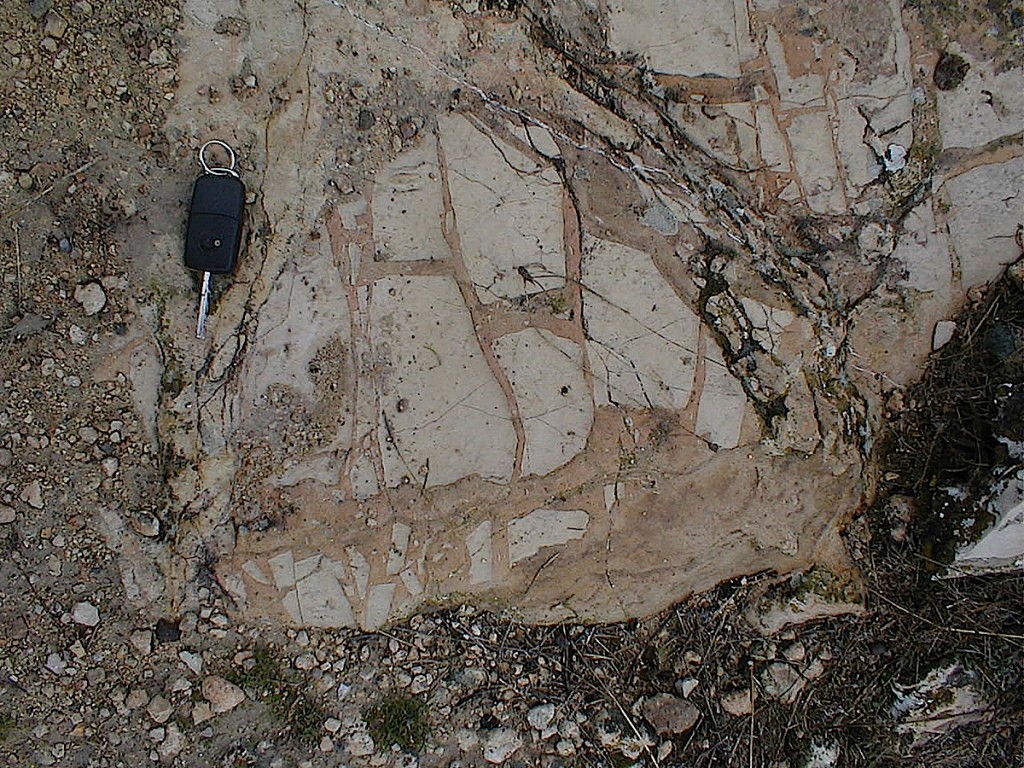 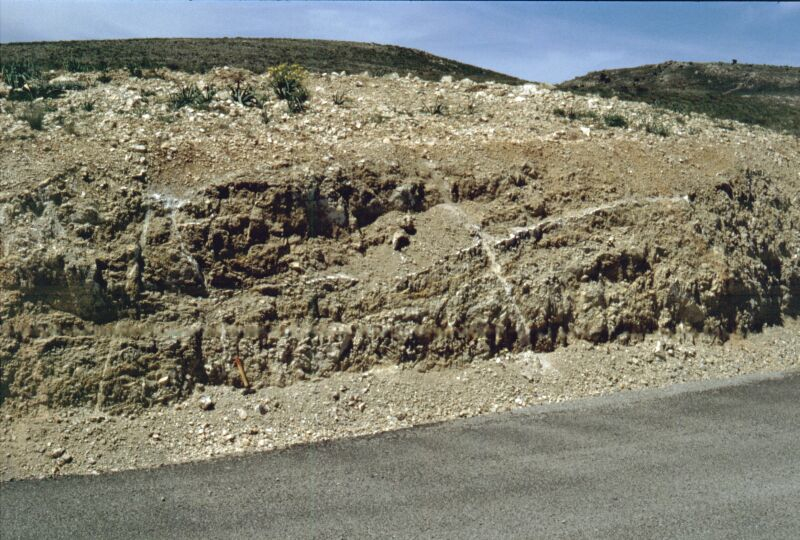 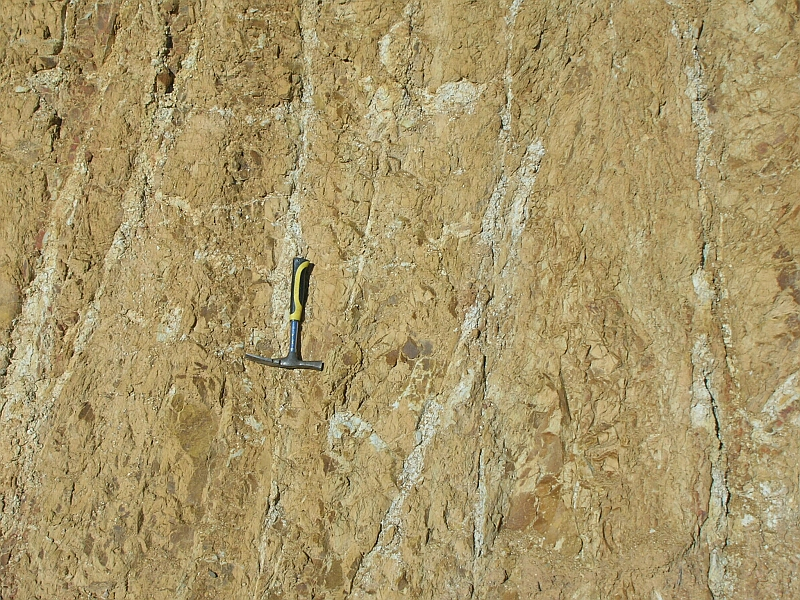 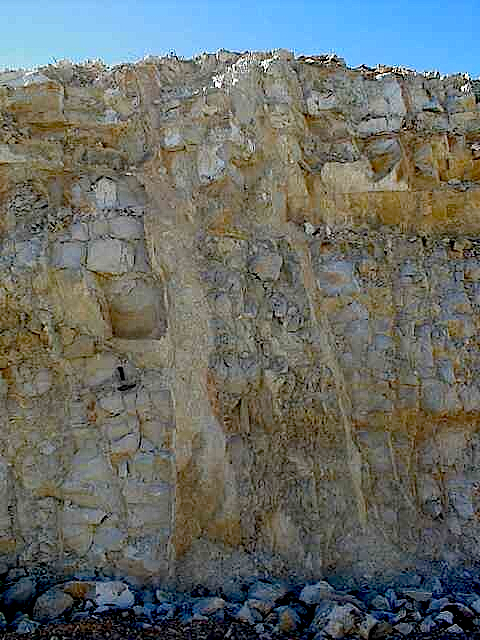 Fig. 6. H-type impact breccia dikes in Jurassic limestones, Fuendetodos, Azuara impact structure. These dikes have nothing in common with any karst features that have been suggested by regional geologists. 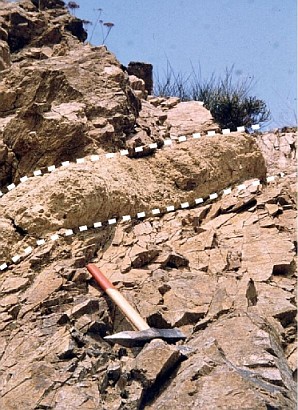 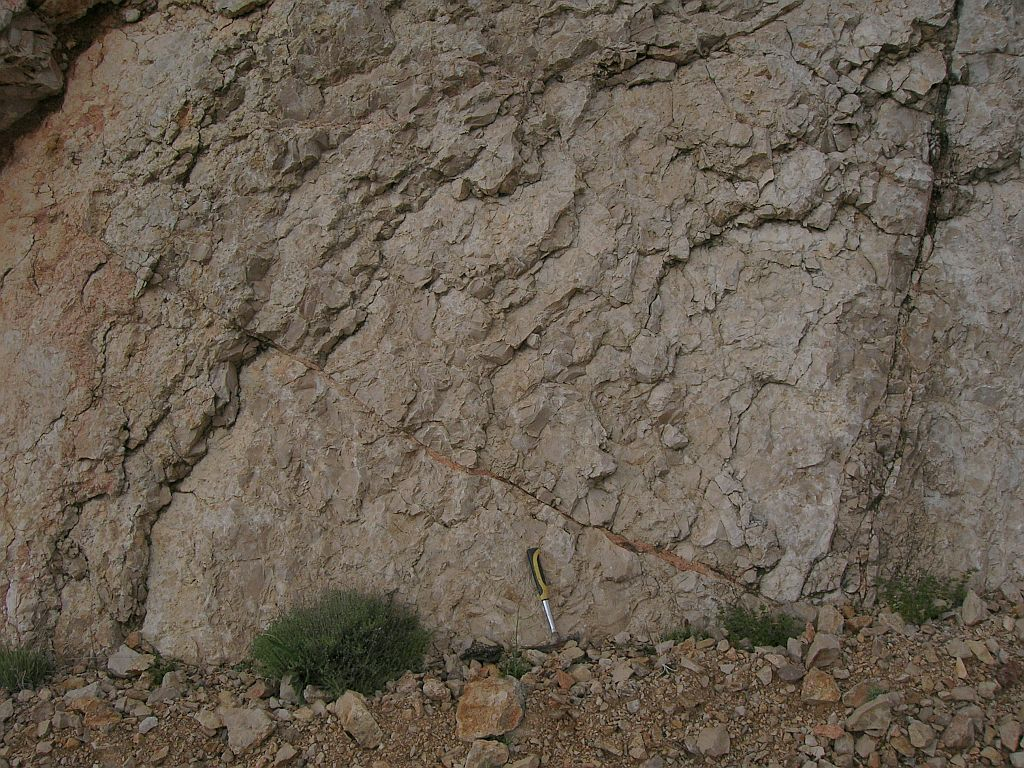 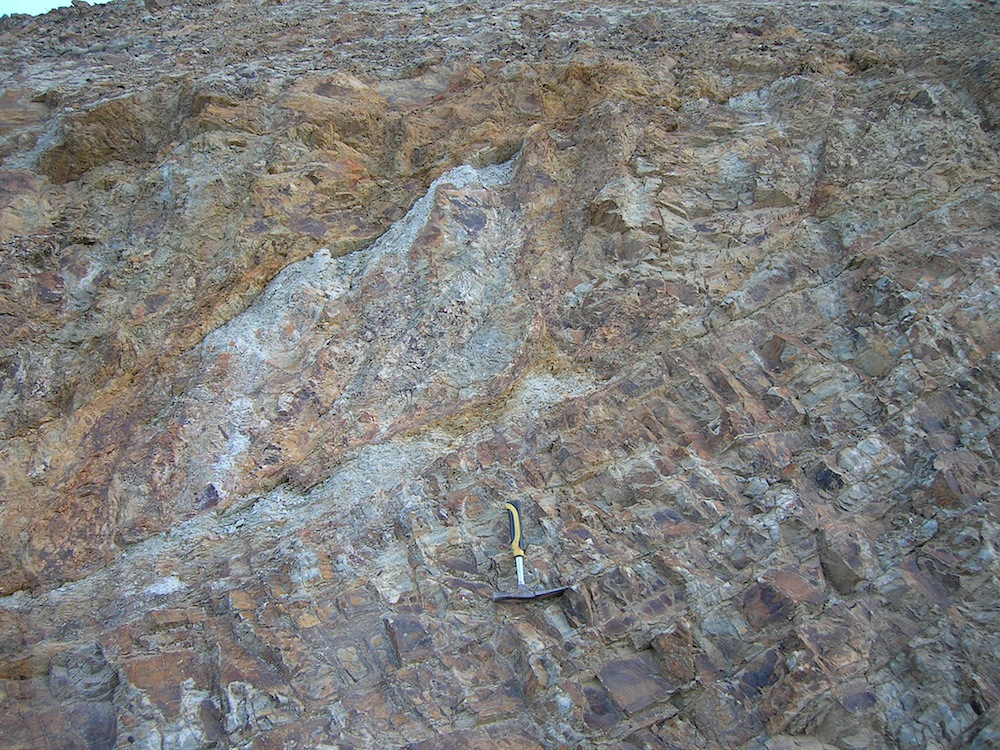 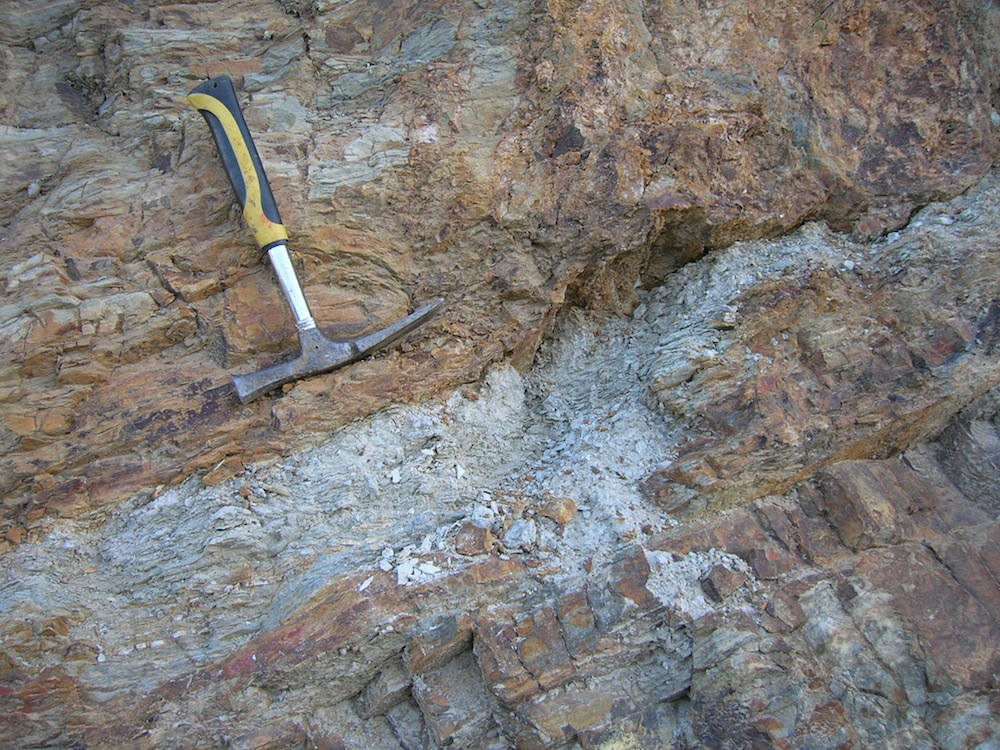 Fig. 13. Detail of the breccia dike in Fig.12. In this case the “breccia” has not the common matrix – clast composition but consists of a finely fractured allochthonous material that has been injected into the well-bedded siltstone.

Systems of closely spaced breccia dikes sharply cutting through their host rock are a prominent impact features in the Spanish large impact structures. Practically in all cases a tectonic or karstic relation can basically and very simply be excluded. 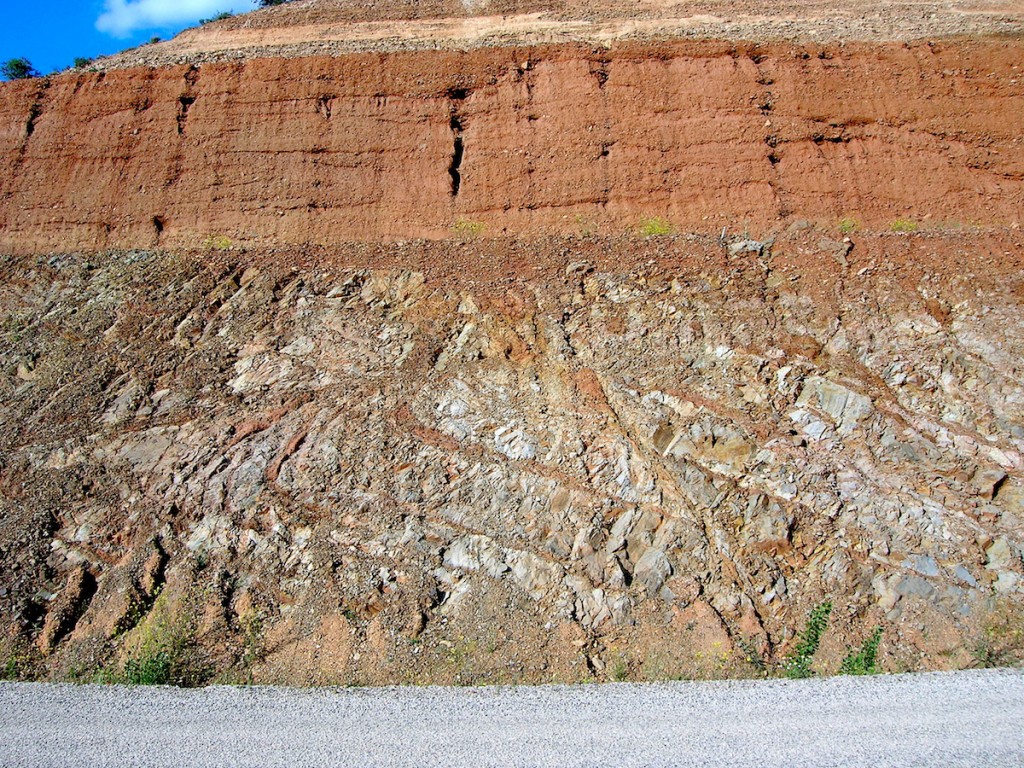 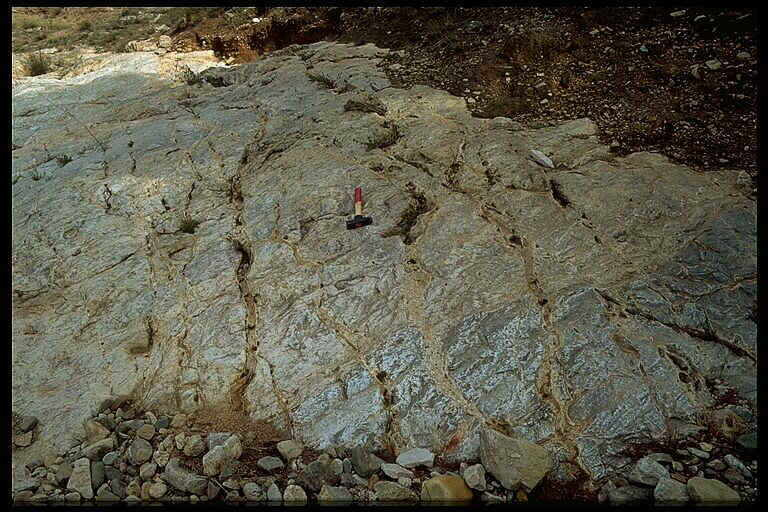 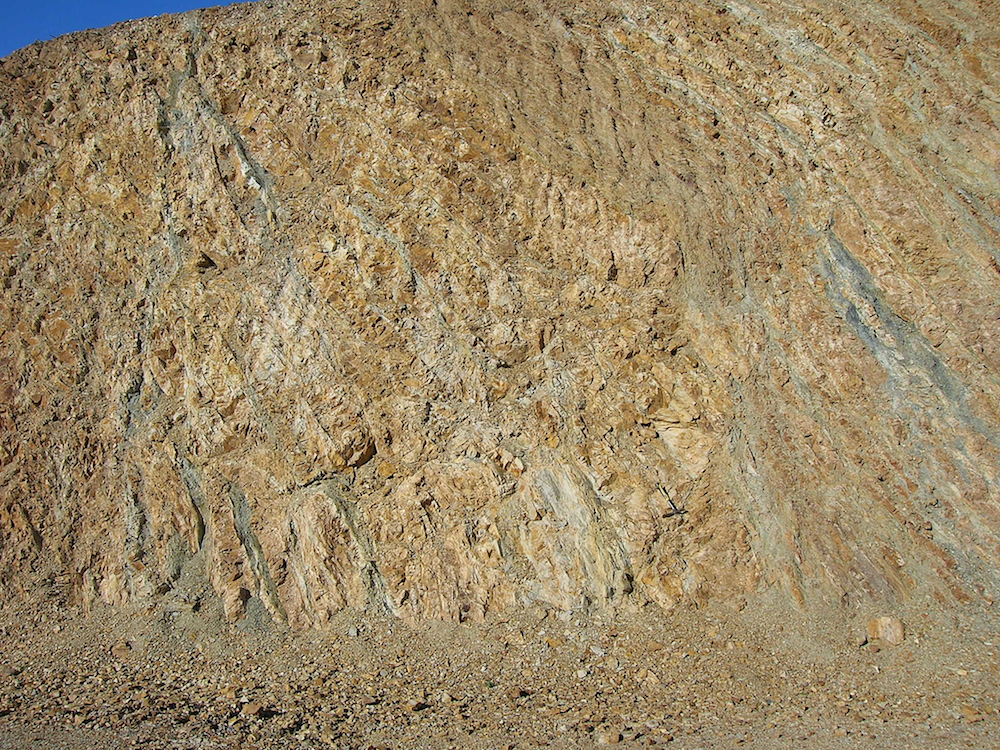 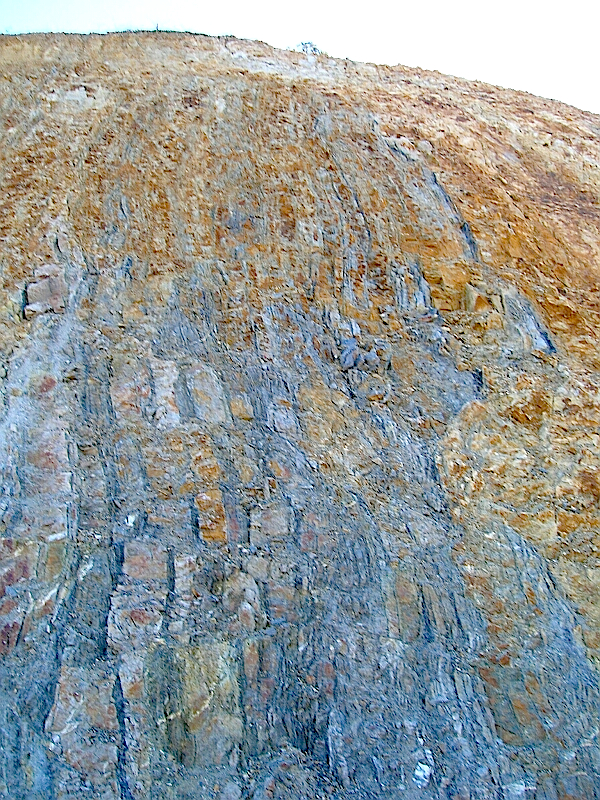 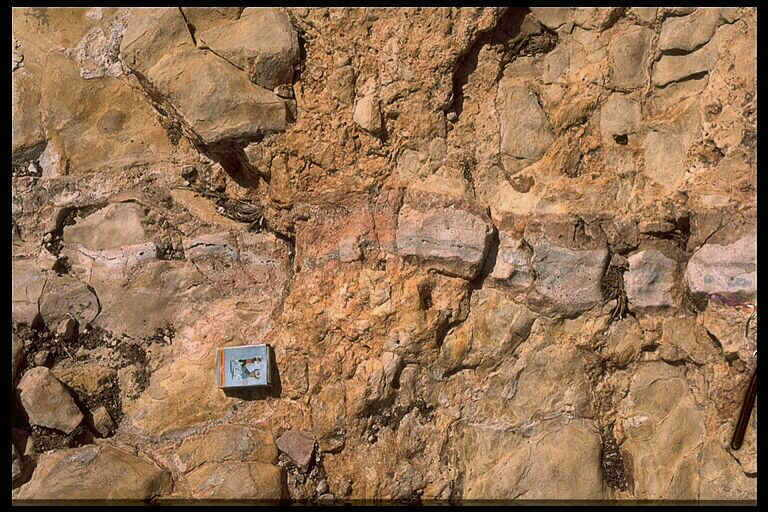 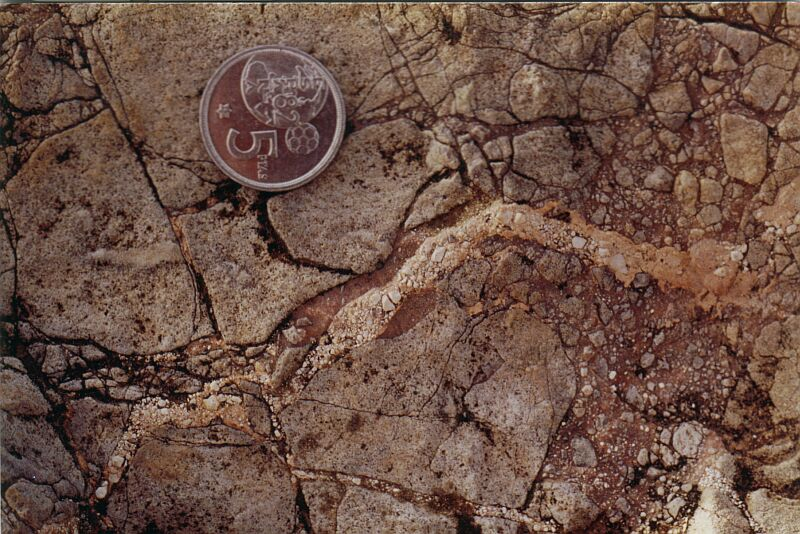 Fig. 20. Impact breccia dike-within-breccia dikes (breccia generations). The emplacement of the second dike (whitish Muschelkalk material) points to a rapid solidification of the first-generation reddish (probably Keuper matrix) dike because of the sharp boundary without any mixing of the dikes’ material. Near Monforte de Moyuela, Azuara impact structure, Spain. 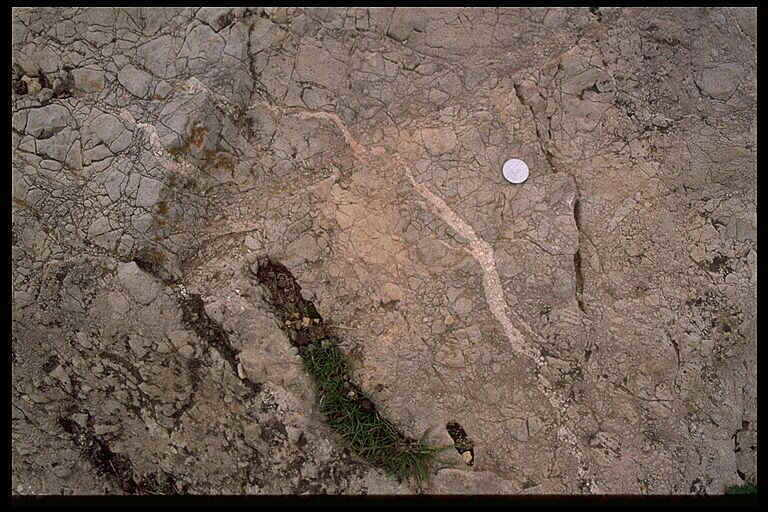 Injected breccia dikes may be quite mighty. Not aware of impact structures and impact phenomena earlier geologists in the Azuara field interpreted them, e.g., as small tectonic grabens, suggesting fault throw of up to 200 m. 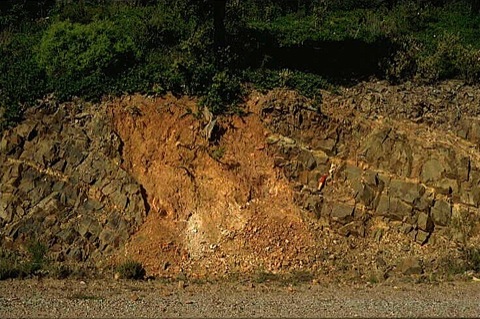 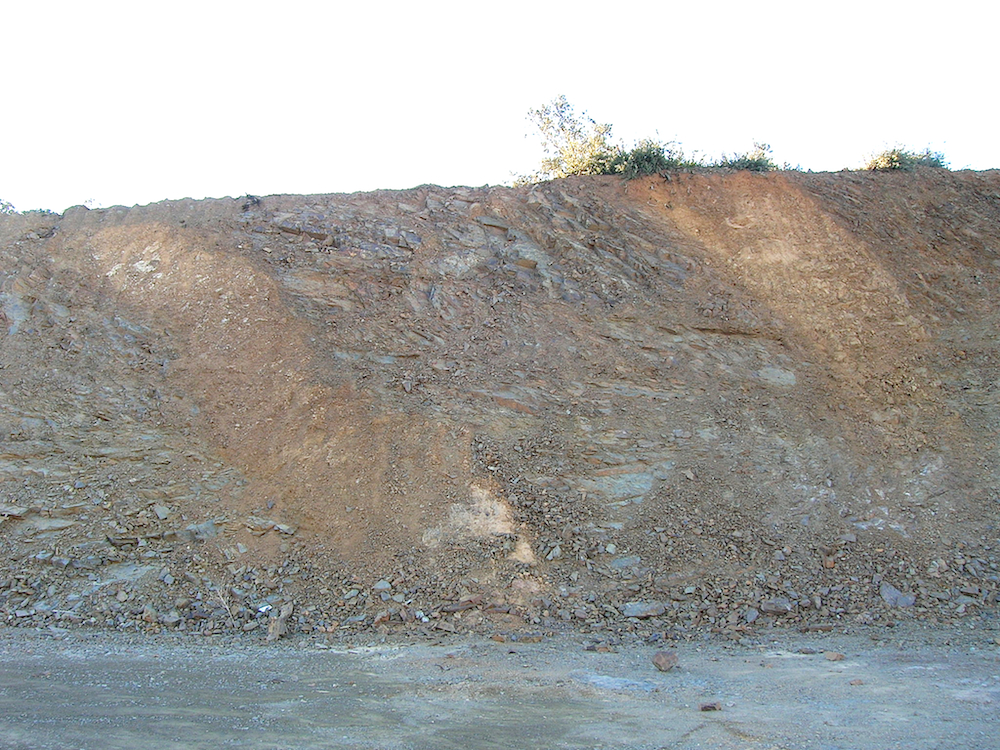 Fig. 23. Thick impact breccia dikes cutting roughly perpendicularly through the bedding of the Paleozoic siltstone. Slope of the Autovía Mudéjar, rim zone of the Azuara impact structure. More about the fascinating impact geology and its engineering implications exposed during construction can be read and seen HERE. 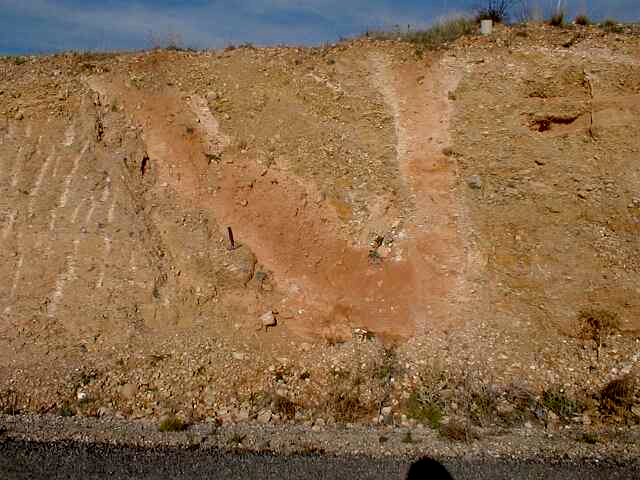 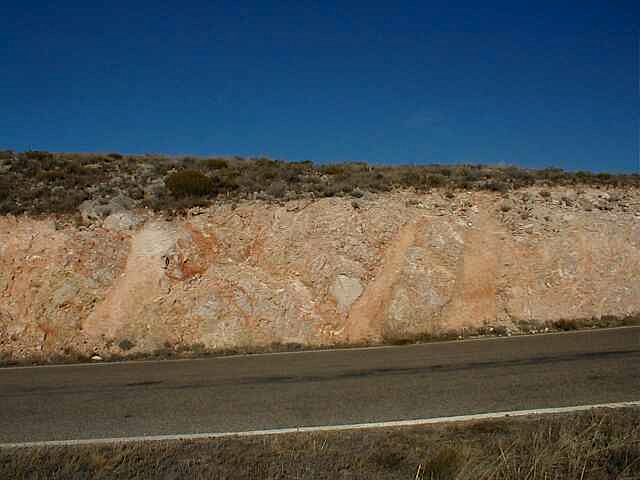 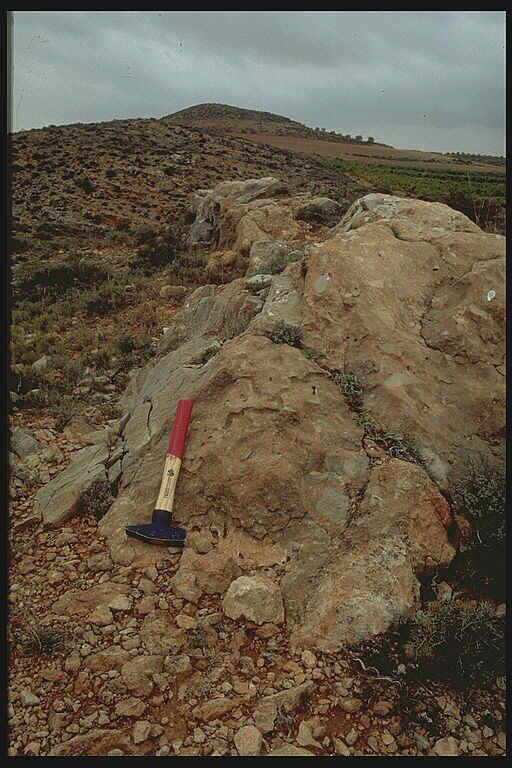 Fig. 26. Prominent impact breccia dike that because of its strong cementation has resisted weathering and can be traced in the field over more than 300 m. Shock effects are abundant in the sedimentary components. Near Muniesa, Azuara impact structure. 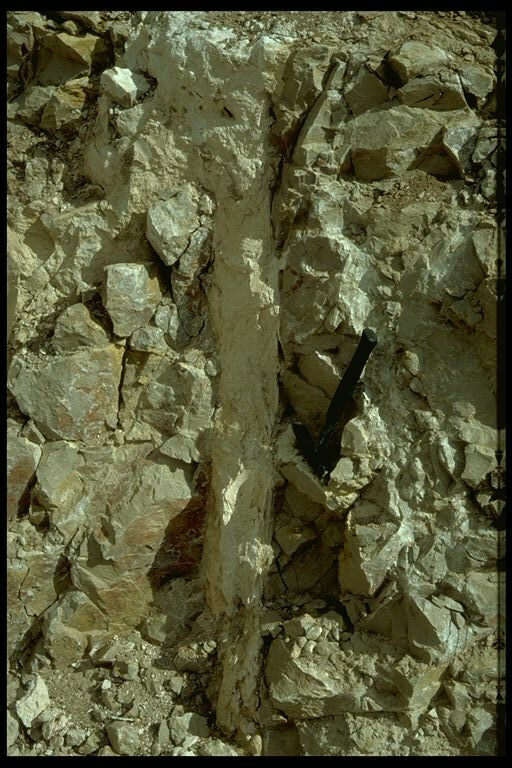 Fig. 27. Impact breccia dike; carbonate matrix originating from crystallization of carbonate melt or limestone decarbonization and recombination; near Ojos Negros, Rubielos de la Cérida impact basin. In the case of carbonate melt and in the strict sense we are dealing with an impact pseudotachylite (see below). 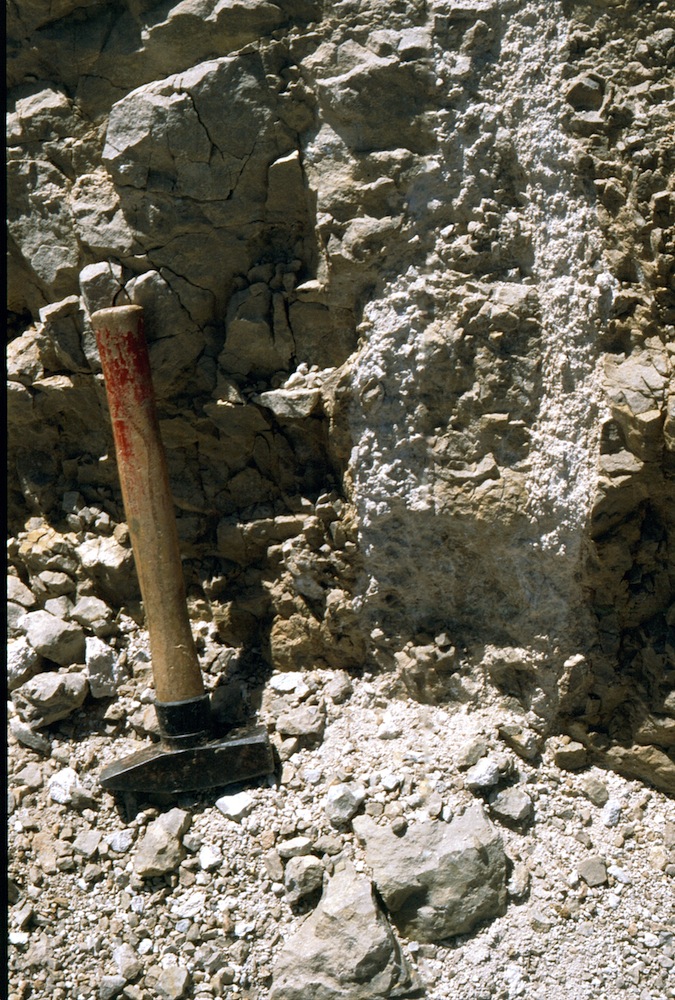 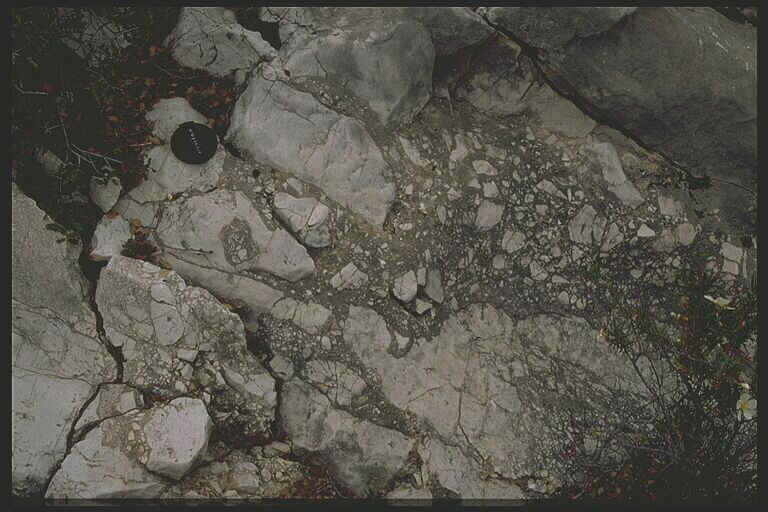 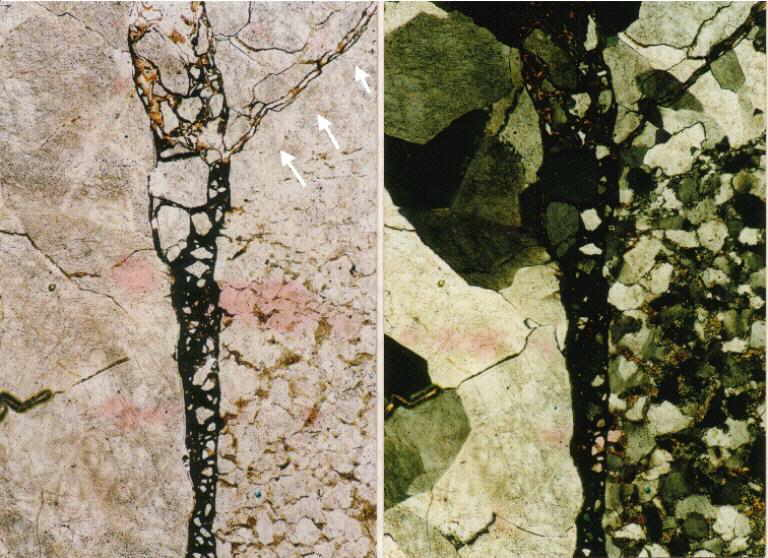 For comparison: the Vredefort and Rochechouart pseudotachylite dikes. 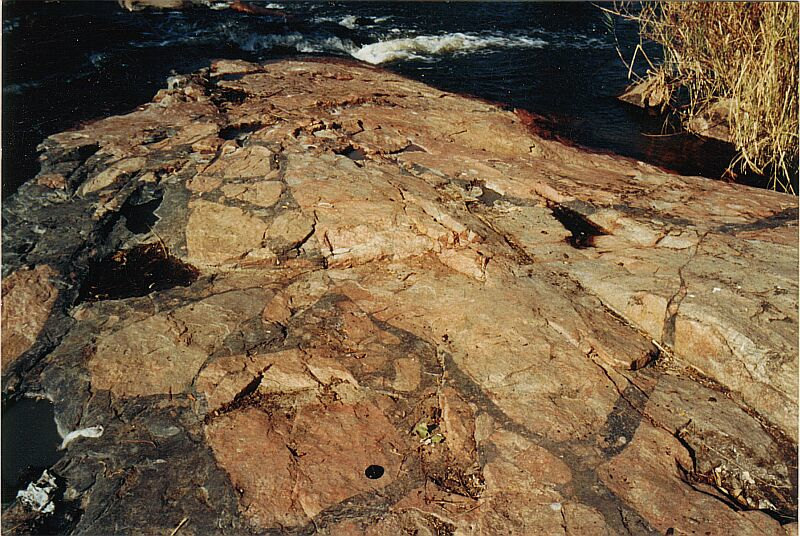 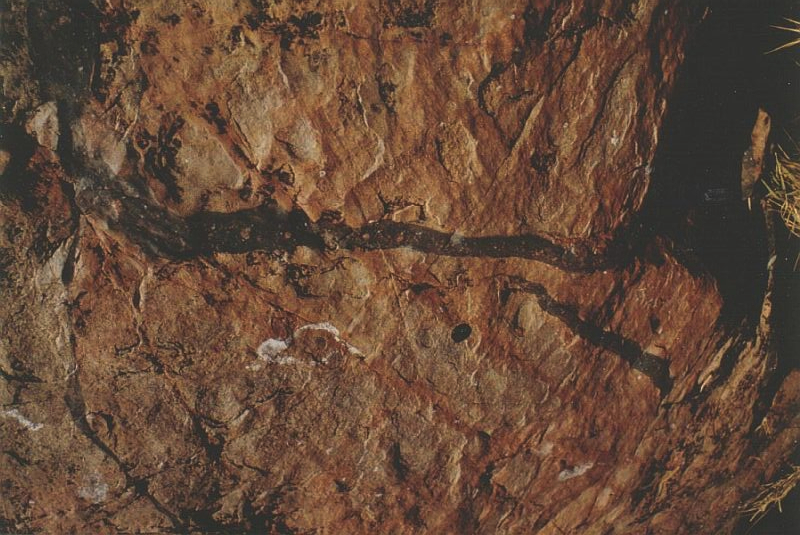 Fig. 34. One more pseudotachylite dike in the basement of the Vredefort impact structure. 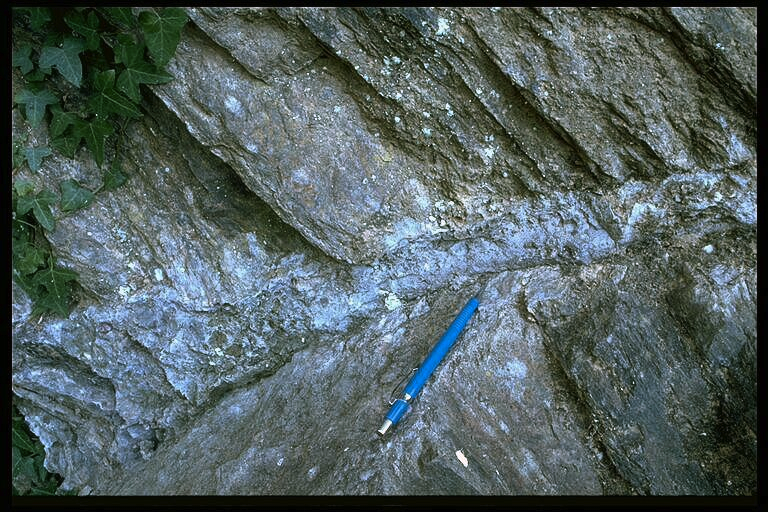